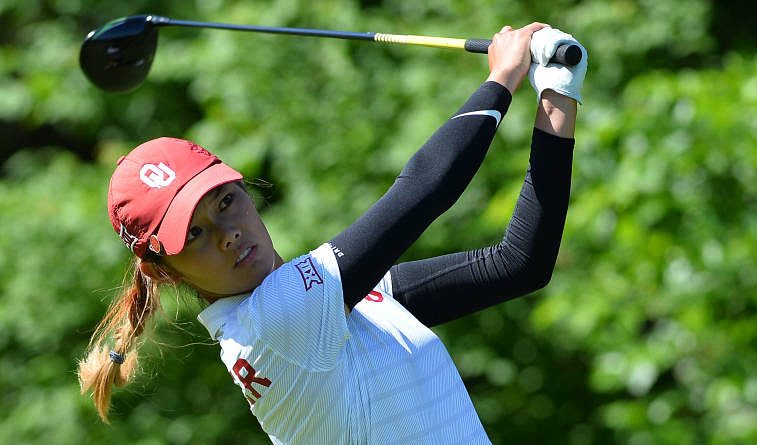 STILLWATER – Oklahoma State’s Emma Broze and Oklahoma’s Julienne Soo moved into the final round but the Sooners as a team fell short of the 15-team cut Sunday at the NCAA Championships at Karsten Creek.

At 1-over for the tournament, Broze (73-74-70 – 217) snagged the fourth individual spot and will tee off on the first hole at 12:40 p.m. The senior will enter the round eight strokes behind the current individual leader, Jennifer Kupcho of Wake Forest.

Despite rainy conditions, Broze posted six birdies including three over her final six holes to finish the day 2-under, which is her best round of the championship.

“I think we played pretty solid all day, but at the end of the day had too many three putts and big numbers and out here that’s going to hurt you,” said Drouin-Luttrell. “Overall, I’m really proud of what the girls were able to do and how they kept fighting. We played really well and gave ourselves a chance – and they did.”

“We had a great season,” said Drouin-Luttrell. “Our senior class had never made it to a national championship, so to finish on this note by playing here in Oklahoma was very fortunate.”

The tournament’s top 15 teams will play one final round of stroke play on Monday to determine an individual national champion and seeding for the eight-team match play bracket. Oklahoma junior Julienne Soo qualified to play in the final round as one of the top nine individuals on a non-advancing team.

Soo shot a 1-under 71 in Sunday’s round to bring her 54-hole total to 219 (+3). The junior is tied for 17th in the 132-person field and is three strokes out of the top 10. The National Golf Coaches Association automatically awards All American honors to the top 10 finishers of the NCAA Championships.

Soo will tee off in her final round at 12:40 p.m. CT on Monday while paired with Broze of Oklahoma State and Micheala Williams of Tennessee. Coverage of the final round will air live on Golf Channel and live scoring will be available on GolfStat.com.

Wood finishes her career with the lowest career scoring average in program history (73.07) and her 57 career par-or-better rounds mark the second-most in OU’s record book.

OU’s lineup at the NCAA Championships also featured a pair of promising freshman. Sydney Youngblood shot a 236 (+20) in the event and Kaitlin Milligan finished at 241 (+25).

“I think it was great experience for them,” said Drouin-Luttrell. “Moving forward, they know what they need to work on over the summer for next season and I think they’ll be ready.”

Tickets are available at okstate.com/ncaagolf and fans can follow the live scoring at GolfStat.com.