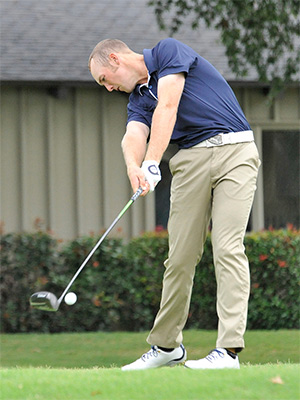 AUSTIN, Texas – Oral Roberts senior golfer Cody Burrows finished his NCAA Tournament in style with birdies on four of the final five holes of his round, Wednesday. Burrows finished the NCAA Austin Regional in a tie for 34th place.

The big news out of the Austin Regional was that the Arkansas Razorbacks, who started the final round in fourth place, played the final three holes in 10 over par and finished sixth. They will not be in the field for the NCAA Championship on their home course The Blessings near Fayetteville next week.

With his performance at the NCAA Tournament, Burrows set a new school record with a 71.5 stroke average in 2018-19, topping the 72.0 average by Mauricio Tamez in 2006-07. Burrows finishes his ORU career as a four-time First Team All-Summit League selection. He won the 2017 Bob Sitton Invitational, and tied for first at the 2019 Summit League Championship.

After a tough start to the tournament in which Burrows found himself seven over after nine holes, the senior played the final 45 holes 1 over. Burrows earned ORU’s first individual at-large bid into the NCAA Tournament since Tamez did so in 2007.

Arkansas’ Julian Perico (67-72-71—210, -3) is the lone individual to advance from the Austin Regional as the lowest individual not from an advancing team.