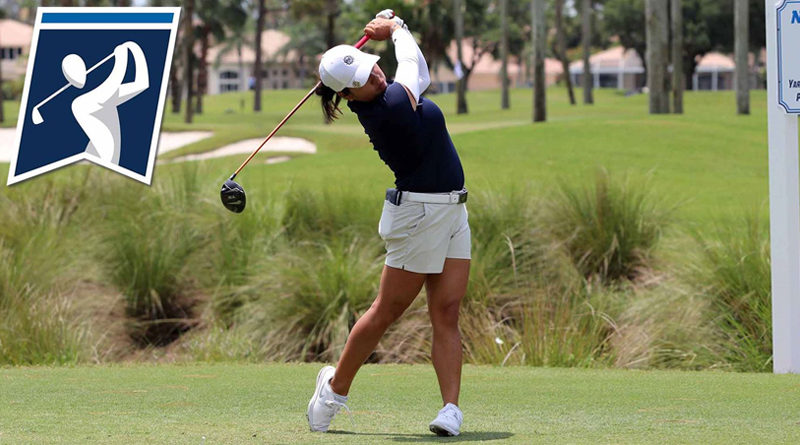 SWOSU’s team total of 317 strokes on Wednesday was 12 shots behind their first-round score, but they minimalized the damage to remain in contention for a spot in the match play portion of the Championships. The top eight teams at the conclusion of Thursday’s third round will move on to a bracket-style match play tournament to determine the team championship.

Gloria Choi remains near the top of the leaderboard, alone in third place after 36 holes at one-under par after she shot even par on Wednesday. Veronika de Bochdanovits is remains in tied for 10th place after carding a four-over 77 in the second round. Elin Wahlin was one shot off her round from Tuesday, carding a 78 in round two while Jenna Eidem and Chloe Thackeray were most impacted by The Bear Trap, turning in matching rounds of 89.

Indianapolis moved into the lead on Wednesday and it enters the final round with a five-shot lead over Barry University. Cal State San Marcos dropped from their first-round lead and they are in third place, five shots ahead of Florida Tech, who leads SWOSU, Lynn and DBU by four strokes for fourth place. The trio holds a one-shot lead over Limestone College for the final match play spot, while Findlay is five strokes behind in ninth place.

The final stroke play round will tee off on Thursday morning.

Oklahoma Christian had a difficult day on Wednesday and now the Eagles have some serious work to do.

The Eagles posted a team score of 329, giving them a two-round score of 642 and dropping them into 14th place in the elite 16-team field. The top eight teams after Wednesday’s final stroke-play round will advance to match play on Thursday and Friday, which will determine the team champion.

No. 18-ranked OC – making its first appearance in the Division II national tournament – will enter the final round trailing eighth-place Limestone (S.C.) by 19 shots.

OC’s top player Tuesday was sophomore Shaley Goad of Wheeler, Texas, who had two birdies while shooting a 4-over-par 77 on the 6,081-yard course. Junior Abigail Rigsby of Courtenay, British Columbia, posted an 80, and both she and Goad were tied for 34th in the 95-woman field at 157 (11-over).

Senior Kate Goodwin of Tulsa had two birdies while shooting an 84 and was tied for 69th at 165. Freshman Alexandria Bennett of Plano, Texas, posted an 88, putting her in a tie for 56th at 163. Senior Elizabeth Freeman of Edmond had the Eagles’ only other birdie, on No. 18 as she shot a 91. She was tied for 90th at 175.

Anahi Servin of Academy of Art (Calif.) and Jaime Jacob of California State-San Marcos led the individual race at 144 (2-under).

The Eagles will tee off at 8 a.m. Wednesday and will be grouped with players from No. 25 Northeastern State and Central Missouri.

Northeastern State shaved a pair of strokes from its first-round score, but they remain in 13th place after 36-holes of the NCAA Championships on Wednesday.  The RiverHawks hold onto a 638 (320-318) and are 15-strokes back of the cutline.

Ebba Moberg turned in the eighth-best overall scorecard with a 1-over 74 in her second go around the Championship Course.  The NSU senior landed 12 pars and an eagle from 160 yards out on the sixth hole that hit the bottom of the pin and fell in the hole.   Moberg will head into the final round of medal play tied for 24th place.