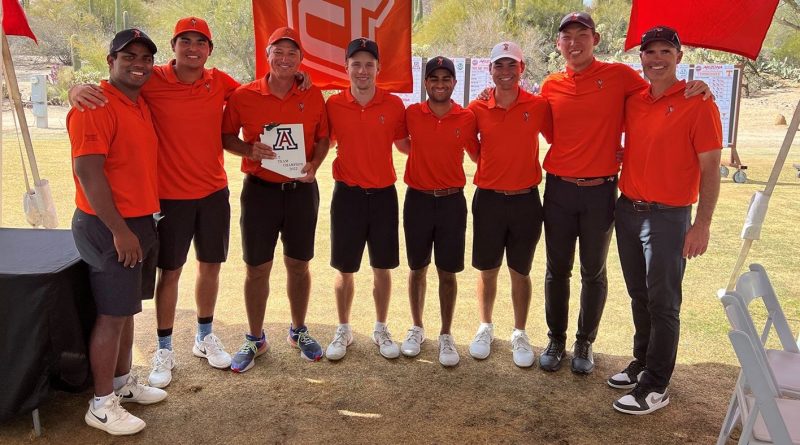 TUCSON, Ariz. – Oklahoma State’s men’s golf team continued its dominating performance in the desert, rolling to a 21-shot victory at the N.I.T. on Saturday at OMNI Tucson National’s Catalina Course. Top-ranked Oklahoma finished in fourth place, a shot behind third-place Pepperdine and five behind Texas.

The battle for second was the only battle, as the second-ranked Cowboys shot a combined 41-under in the first two rounds Friday in winning the NIT for the second consecutive year. dOSU’s 53-under total of 811 set the new tournament scoring record and the margin of victory matched the tournament’s previous best set in 2019 by Arizona State.

The win was the second of the spring and third overall this season for the Pokes.

Eugenio Chacarra once again led the charge for the Cowboys, firing a final-round 64 to cruise to a five-shot victory. The senior did so in record-setting fashion, smashing the tournament’s individual mark by three strokes with his 20-under total of 196 to earn medalist honors for the second time this spring.

Chacarra turned in a bogey-free performance on Saturday. After tallying birdies at Nos. 2, 3 and 4, he added two more at the sixth and eighth to turn in 5-under 31. He birdied the 10th and 12th to move to 7-under for the day before adding his final birdie at the 16th.

Joining Chacarra in the top five was Aman Gupta, who closed with a 69 to finish at 14-under 202. The senior finished in sole possession of third place, marking his second consecutive top-10 showing.

Senior Rasmus Neergaard-Petersen closed with a 71 to finish tied for 14th place at 209, while junior Brian Stark was a stroke back at 210 after signing for a 75 to tie for 16th place.

Junior Rayhan Thomas rounded out the starting five with a 72 to finish at 213 and tied for 34th place.

Sophomore Bo Jin competed individually and finished with a 68 to stand at 209 and tied for 14th place.

The Sooners were led by a top-10 finish from Chris Gotterup.

The Sooners (4, -27) entered the day in a tie for third but were bested in Saturday’s final round by No. 2 Oklahoma State, No. 12 Texas and No. 9 Pepperdine bumping the Sooners down a spot. It’s the first time the top-ranked Sooners have finished outside of the top three of a regular-season tournament since the final event of the shortened 2019-20 season.

Patrick Welch and Logan McAllister both shared 16th at 6-under for the tournament.

On Saturday, Stephen Campbell Jr. (T23, -4) closed with a team-best 68 to rise into the top 25. The redshirt freshman tallied six birdies and just two bogeys on the day to notch the strong finish. True freshman Drew Goodman (T43, -1) rounded out the OU lineup by posting back-to-back 72s on Friday but got into the red with a 71 (-1) the close his tournament.

It’s the second time this spring that the entire OU lineup finished under par. The Sooners’ 27-under par mark this week marks the third consecutive event that OU has finished 25-under par or better, the longest streak in at least five years.