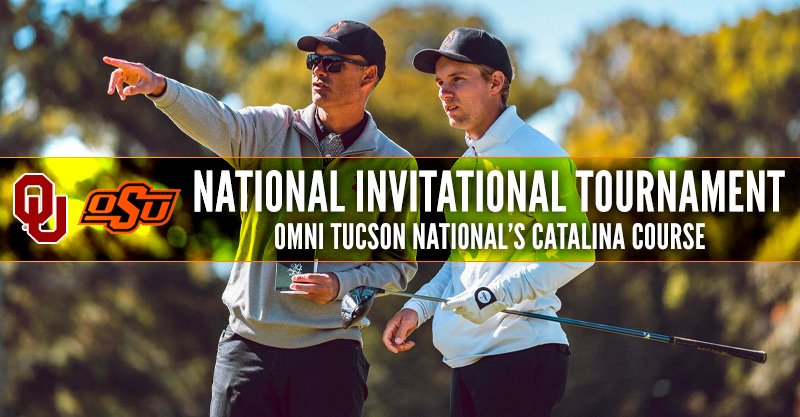 TUCSON, Ariz. — Top-ranked Oklahoma and No. 2 Oklahoma State will both be competing in the National Invitational Tournament hosted by the University of Arizona this weekend at the par-72, 7,200-yard Catalina Course at Omni Tuscon.

The Sooners will look to tie a program record by winning its fifth tournament of the season in the 54-hole event that  features the best field in golf this week as seven top-25 teams, including four inside the top 10.

The Sooners have won their last three events and have been dominant to open the spring. As a team, Oklahoma is a combined 97-under over its previous six rounds of play and has posted four of the school’s 10 lowest rounds in program history during that stretch. In addition, the 97-under mark over two tournaments marked the lowest combined scores vs. par in back-to-back events in NCAA history.

Teams will fight daylight and try and play 36 holes Friday before wrapping up with a final 18 holes on Saturday.

The Oklahoma lineup features three All-Americans, including Chris Gotterup, Logan McAllister and Patrick Welch. Those three will be joined by Drew Goodman and Stephen Campbell Jr., a freshman and redshirt freshman, respectively. In addition, Ben Lorenz joins the tournament as an individual.

The second-ranked Cowboys will be looking to repeat at the event after their four-stroke victory at last year’s tournament.

OSU’s starting five will consist of seniors Eugenio Chacarra and Aman Gupta as well as juniors Brian Stark and Rayhan Thomas. Senior Rasmus Neergaard-Petersen, who is coming off his first career victory in OSU’s last outing at the General Hackler Championship, will round out the lineup.

Chacarra was the runner-up at last year’s N.I.T., while Gupta tied for seventh place.

The Cowboys finished in fourth place in the team race at The Dunes Golf and Beach Club. Neergaard-Petersen was joined in the top 10 by Thomas and Gupta, who finished in sixth and tied for seventh place, respectively.

The field as ranked by Golfstat.