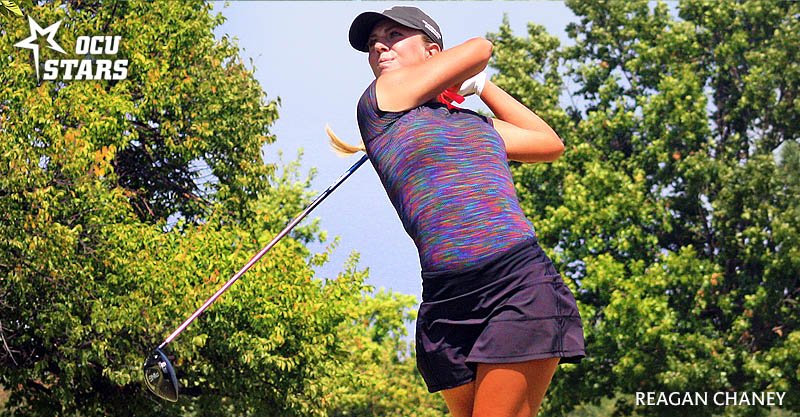 EDMOND, Okla. – Oklahoma City University occupied nine of the top 10 spots atop the individual leaderboard through two rounds of the Rose Creek Classic on Monday at Rose Creek Golf Club.

OCU, ranked fourth in NAIA women’s golf, and the Stars’ Blue team held the top two slots in the team standings. Reagan Chaney of the Stars paced the field.

Chaney, a freshman from Ardmore, Okla., posted a 6-under-par 70-68—138 for a four-stroke lead in the tournament. Chaney sank 10 birdies Monday and nailed seven during her second round. During her second 18 holes, Chaney buried three consecutive birdies on holes 4, 5 and 6 and two more in a row on Nos. 10 and 11.

OCU’s top three individuals produced under-par scores. Natalie Gough turned in a 2-under-par 70-72—142. Gough, a senior from Bixby, Okla., made seven birdies over the 36 holes including five during the early round.

The Stars’ Meghan Charles, a freshman from Sand Springs, Okla., had a 76-80—156, knocking in three birdies.

The tournament ends Tuesday, when the last round tees off 8:30 a.m. at Rose Creek.