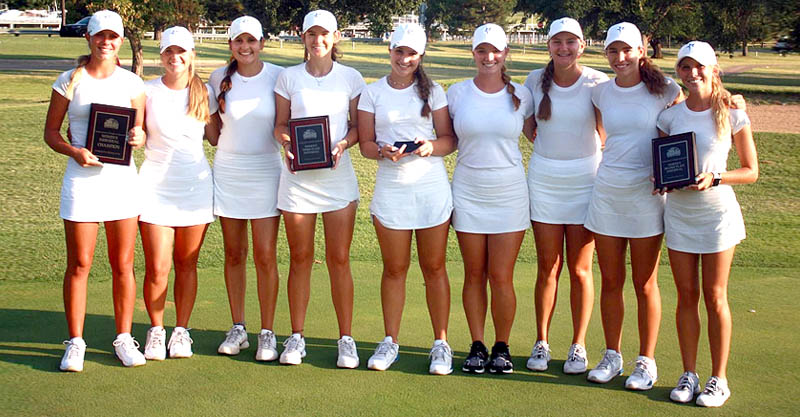 Reagan Chaney, a freshman from Ardmore, Okla., boasted of the individual win as well as best 36-hole score in OCU history, while the Stars, ranked fourth in NAIA women’s golf, posted the top two-round team score in team history.

Chaney delivered an 11-under-par 64-69–133 and finished with 15 birdies among the 36 holes. Chaney knocked down consecutive birdies on Nos. 5, 6 and 7 on Tuesday. She surpassed Laura Jones’ 4-under-par 70-66–136 on Oct. 15-16, 2007 in the Oklahoma Intercollegiate for Women at The Territory Golf & Country Club in Duncan, Okla. There have been four 6-under-par two-round scores recorded by an OCU golfer, most recently by Lauren Pritchard on Oct. 14-15, 2019 in the Sydney Cox Invitational at Lincoln Park Golf Course.

Chaney notched the win in her first college tournament to become the first Oklahoma City women’s golfer since Sydney Cox to pull off the feat. Cox won the Southern Nazarene Invitational on Sept. 19-20, 2005 at Rose Creek Golf Club in Edmond, Okla., to take her first collegiate start.

Redlands Community College took third in the vent behind Dodge City. Alicja Milesska finished eighth at 146 after rounds of 72-74, while Ashlyn Acosta tied for 19th at 151 (69-82).

Oklahoma City’s Paige Wood took runner-up honors with a 69-68–137. Wood, a freshman from McKinney, Texas, nailed 11 birdies over the two days. Wood closed the tournament by pounding in birdies on four of her last five holes and her last three holes.

Natalie Gough of the Stars produced a 71-69–140, which placed her tied for third. Gough, a senior from Bixby, Okla., notched nine birdies. Meghan Charles and Jamie Welsh shared fifth while playing as individuals. Charles, a freshman from Sand Springs, Okla., carded a 71-73–144, and Welsh, a freshman from Coppell, Texas, compiled a 72-72–144.

The temperature reached the 90s on the first day and upper 80s on Tuesday. Wind blew up to 25 mph during the tournament.

The Stars play next in the Missouri State/Payne Stewart Memorial on Sept. 13-14 at Twin Oaks Country Club in Springfield, Mo.