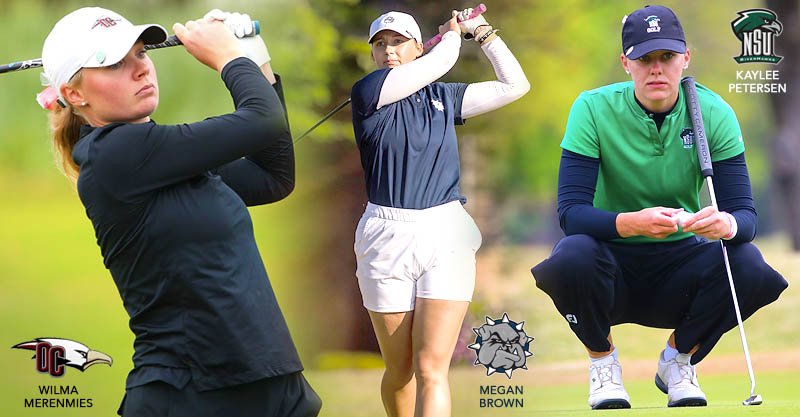 DALLAS (Sept. 7, 2021) – After a rough finish to the first round dropped No. 16-ranked Oklahoma Christian down the leaderboard on Tuesday, the Eagles rebounded in the second round to finish fifth in the Dallas Baptist Invitational at The Golf Club of Dallas.

The second-round OC surge was led by Wilma Merenmies, who posted the best round of the day for the Eagles, a 2-under-par 70 that included six birdies. Merenmies had three of those birdies in succession (on the par-3 No. 17, the par-5 No. 18 and the par-4 No. 1) and her final birdie, on the par-4 No. 4, proved to be the difference in allowing the Eagles to finish fifth outright in the 11-team tournament.

Merenmies, who shot a 78 in the opening round on the 6,102-yard course, moved up 16 spots in the second round and tied for ninth in the 71-woman field at 148 (4-over). The sophomore from Jyvaskya, Finland, recorded her fifth career top-10 finish.

No. 1 Dallas Baptist (Texas), the defending NCAA Division II national champion, dominated the one-day tournament. The Patriots’ A team posted a two-round score of 581, 22 shots ahead of the runner-up, Texas A&M International. DBU’s B team placed third at 604, one shot ahead of No. 5-ranked St. Mary’s (Texas).

During the opening round, the Eagles rose as high as second in the team race, but they stumbled over their final holes of the round on a day when temperatures in north Texas soared into the mid 90s and ended the round in eighth.

But led by Merenmies and junior Alexandria Bennett of Plano, Texas, the Eagles moved up three spots in the final standings during the second round.

Merenmies and Bennett tied for second in the tournament with eight birdies each. Bennett had five in her opening round, helping her salvage a 79, then improved to 75 in the second round with three more birdies. She finished tied for 23rd.

Dallas Baptist’s Madison Head was the medalist, finishing at 142 (2-under) for the tournament.

The Eagles will return to north Texas in two weeks to play in the Dallas Baptist Classic at Wildhorse Golf Club at Robson Ranch in Denton, Texas.

BLUE SPRINGS, Mo. — Northeastern State was in fifth and Southwestern Oklahoma State in sixth after the first round of the Central Region Fall Preview Tuesday.

NSU’s Kaylee Petersen led her squad with a 74 while Megan Brown paced SWOSU with a 77. Oklahoma Baptist was tied for 11th, led by Hayden Meiser with a 77.