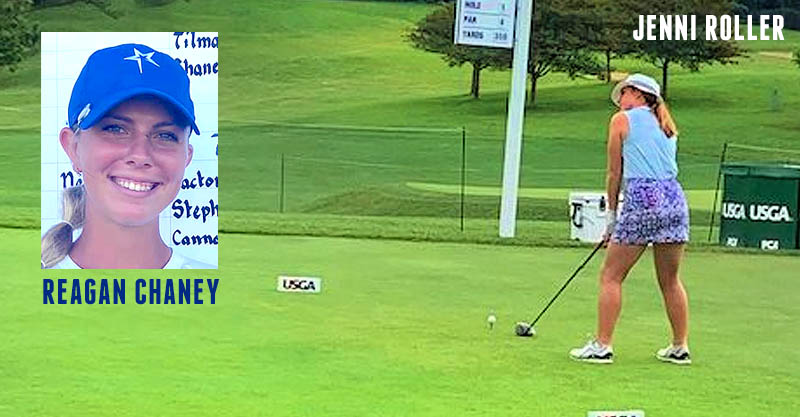 Above: Jenni Roller of Jenks tees off in her opening round

On a day when the Heat Index soared to 107 degrees, Xin (Cindy) Kou was nearly as scorching with her putter at Columbia Country Club. The 17-year-old rolled in five birdies to post a 4-under 66 in Round 1 to set the pace at the 72nd U.S. Girls’ Junior Championship.

Kou played in the third group off No. 1 on Monday, taking advantage of the cooler morning temperatures by birdieing her opening two holes. She turned in 33 and immediately followed with a birdie on No. 10. After her lone bogey of the day on the par-3 13th, Kou finished with birdies on two of her final three holes, closing with a 5-footer on the 18th.

The two Oklahoma qualifiers are near the cut line of 64 who will advance to match play after round one. Reagan Chaney of Ardmore shot a 4-over 74 and is tied for 43rd while Jenni Roller of Jenks shot 75 and is tied for 55th. The field will be cut to 64 after the second round Tuesday and match play will begin Wednesday.

“I think I just stayed really patient,” said Kou, of China, assessing her first round. “I left myself uphill putts and some dropped.”

On the strength of 11 AJGA victories, Kou is the third-highest ranked player in the field at No. 106 in the Women’s World Amateur Golf Ranking (WAGR). That success has bred a noticeable confidence that she brought to the Girls’ Junior this week.

“It makes me feel really comfortable stepping into this field knowing that I’m one of the better players,” said Kou, who speaks both Mandarin and English. “I think confidence is a really big thing and not being nervous when there are big crowds and people watching, I think that’s important.”

In addition to Kou, only three other players posted rounds in red figures on Monday: Kou’s fellow competitor Kiera Bartholomew (69), the reigning U.S. Amateur Four-Ball champion Savannah Barber (69) and the No. 1 golfer in the Women’s WAGR, Rose Zhang (69).

Last August, Zhang won the 120th U.S. Women’s Amateur at Woodmont Country Club in Rockville, Md., defeating Gabriela Ruffels in 38 holes. Back in Maryland less than a year later, she is in the mix again, this time at Columbia.

“After my win at the Women’s Am, there has definitely been a lot more attention,” said Zhang, 18, of Irvine, Calif. “For me, it’s just being able to do what I need to do on the course and, at the same time, be mature and handle myself in different social situations.”