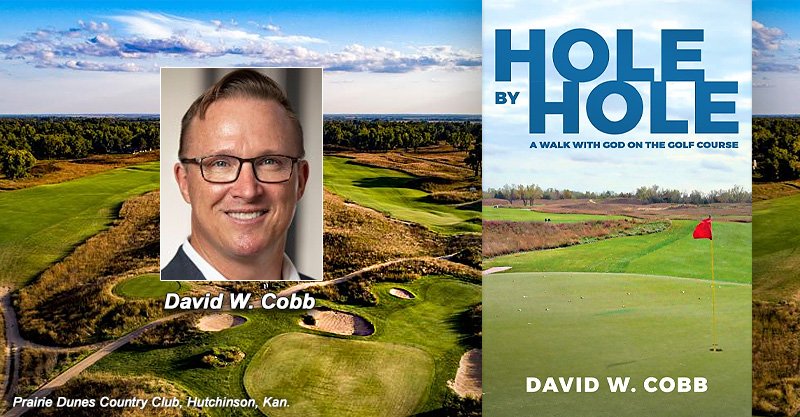 Tulsan David Cobb, who in addition to his day job is a motivational speaker and former golf course rater for GolfWeek, turned one of his golf journeys into a new book titled Hole By Hole, A Walk with God on the Golf Course.

Not surprisingly, the book combines Cobb’s love of golf and spiritual inspiration into a Bagger Vance-type tale of the rejuvenation of a troubled man’s soul after a round at Prairie Dunes Country Club in Hutchinson, Kan. Cobb said the book was inspired primarily by two events, his own round at a windswept Prairie Dunes in late October of 2009, and the first sad fall from grace of Tiger Woods in November of that year after his former wife Elin Nordegren discovered he had been cheating on her with numerous women.

“For a guy like that who was as successful as you can be, but was still spiritually broken, it made me think of what’s really important in life,” Cobb said. “I started to write a rebuke, but then it morphed into something that will hopefully inspire others.”

The book is 92 pages, self published with an assist from Barefoot Publishing, and available on Amazon here.

“It’s definitely a book for golfers,” Cobb said. “When I played Prairie Dunes, I was inspired. It’s definitely one of my favorites and has a spiritual nature about it. By the time I finished my round there I knew I would like to write a book about that place.”

Prairie Dunes is set in natural sand dunes just outside of Hutchinson, Kan., and has consistently been one of the top-ranked courses in the country. The original nine holes were designed by Perry Maxwell in 1937, with nine holes added by son Press Maxwell in 1957. As Tom Watson said, “It’s a little bit of Scotland in the Land of Oz.”