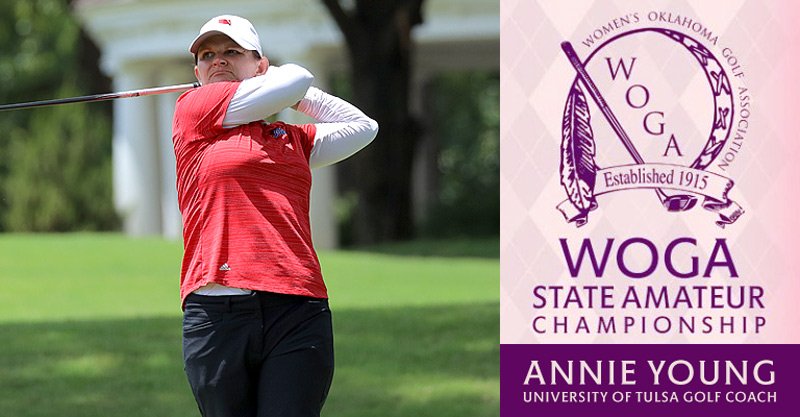 University of Tulsa golf coach Annie Young is proving she’s still got game, as is one of her top team members.

Young , a former All-America player at Oklahoma State where she starred from 2001-05 before later coaching the Cowgirls for three highly successful seasons, rolled through two collegiate challengers Tuesday in the 102nd Women’s Oklahoma Golf Association State Amateur Championship at the Golf Club of Oklahoma in Broken Arrow.

Young, who was hired by TU in June of 2018 to turn around the fortunes of the moribund women’s golf program, defeated Lauren Behnken of Tulsa 5 and 4 in the opening round, then stormed past Emma Shelly of Bartlesville 6 and 4 in the afternoon to move into the quarterfinals Wednesday morning.

She’ll play another golfer with OSU connections. Faith Hopkins of Bartlesville began her collegiate career at OSU but this summer transferred to Missouri State. Hopkins defeated Brooklyn Bostick of Duncan 1 up and Joise Patterson of Chandler 2 and 1.

On the other side of the bracket, one of Young’s top players at Tulsa is also moving ahead. Taylor Dobson of Broken Arrow, who was low qualifier and the only player to shoot under par Monday with a 70, rolled past Dana Hurley of Tulsa 7 and 6 before edging Madison O’Dell of Owasso 1 up.

Last year’s runnerup ShaeBug Scarberry of Purcell, who played her freshman season at Tulsa before transferring to Troy, coached by former TU coach Randy Keck, won a well-played morning match against Reagan Chaney of Ardmore 1 up, but then ran into a steam roller in the afternoon in the form of Faith Belmear of Owasso, who defeated her 4 and 2.

Sydney Hermann of Ponca City and Dalton State College may also be one to reckon with. She defeated Hannah Torres of Oklahoma City 3 and 2 and Kaylee Peterson of Enid 5 and 4.

Rachel Eckert of Bixby and Oklahoma City University kept the family hopes for a state title alive with victories over OCU teammate Blayne Barker of Durant 2 and 1 and Alyssa Wilson of Yukon and Oklahoma Christian 1 up in 20 holes. Eckert’s brother T.J. played in the OGA State Amateur at the Patriot in Owasso Tuesday but lost in the first round.

The quarterfinals and semifinals will be played Wednesday with the finals Thursday morning.