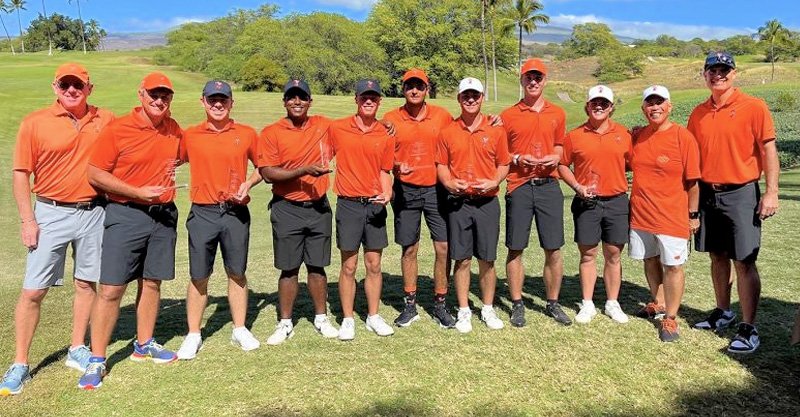 KAMUELA, Hawaii – Oklahoma State’s men’s golf team fired a 24-under 264 during its final round to erase a 10-shot deficit on its way to victory in its spring opener at the Amer Ari Invitational on Saturday at Hapuna Golf Course.

The win was OSU’s second of the year and marked its ninth at the event on the Big Island.

The Cowboys finished with a final tally of 50-under, 814, and a shot clear of Texas Tech at the par-72, 6,875-yard layout. OSU’s final round matched the school’s 18-hole scoring record, which was previously recorded at the 2005 Waikoloa Intercollegiate.

Individually, Eugenio Chacarra set the course record, firing a 10-under 62 to claim medalist honors at 19-under 197. The OSU senior finished two shots clear of the field after matching the school’s 18-hole scoring record held by four other Cowboys.

Chacarra birdied three of his first five holes before recording his lone bogey of the day at the ninth. He would answer with a birdie at the 10th and would add birdies at Nos. 14, 16, 17 and 18 to turn in 5-under 31. He would add his ninth birdie of the round at the second before closing with an eagle at the par-5 third.

Joining Chacarra in the top 10 was junior Rayhan Thomas, who fired a closing 66 to finish at 15-under 201 and in sole possession of fifth place.

Junior Brian Stark signed for a 68 during his third round to move into a tie for 13th at 206, while freshman Tiger Christensen posted a 71 to finish at 214 and tied for 45th place.

Sophomore Jonas Baumgartner rounded out the starting five with a 68 to finish tied for 58th place at 215.

Juniors Hazen Newman and Dillon Stewart competed individually. Newman finished with a 69 to get in with a 209 total and tied for 23rd place, while Stewart finished at 223 and tied for 92nd place after carding his second consecutive 73.