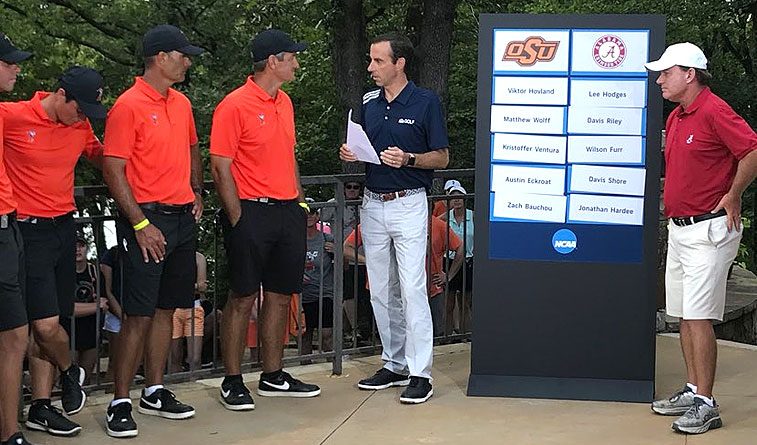 Standing in the way is the fifth-ranked Alabama Crimson Tide, which blanked Duke 5-0 Tuesday afternoon. Alabama and OSU met in the finals in 2014 at Prairie Dunes in Hutchinson, Kan., an emotional affair as former Cowboy coach Mike McGraw was serving as an assistant at Alabama after being fired by Mike Holder.

McGraw now has his own team at Baylor, these are Alan Bratton’s players and OSU is hungry to win for the first time in three tries since the NCAA went to match play in 2009. The Cowboys lost in the finals in 2010 to Augusta State and again in 2014.

The finals will begin at 2:25 p.m. and will be televised live by Golf Channel beginning around 3 p.m. Live scoring can be found here.

Hovland, the sophomore from Norway, defeated Jovan Rebula 4 and 3. Bauchou won 4 and 3 over Wells Padgett, who grew up in Wichita and was a regular on the Oklahoma Junior Golf Tour. Eckroat held off Brandon Mancheno, who finished second individually in the stroke play portion at 7-under.

Eckroat, who won the first of his two Class 6A individual state championships for Edmond North as a freshman at Karsten Creek, made a nifty pitch after missing the green left on the 16th hole to put away Mancheno. Eckroat birdied four of the first six holes to take control and finished with five birdies against one bogey.

“That’s why we brought him here, and I think that’s why he came here,” Bratton said.
“He’s got a lot of guts, and he’s playing very well. He showed that in the stroke play, and obviously he did that today. But certainly he wasn’t the only one. These two guys over here (Hovland and Bauchou) took care of their matches, and the other guys took care of business in the first round. We’ll need everybody tomorrow, and we’re fortunate to have a deep lineup, and expect them all to take care of the guy in front of them.”

Kristoffer Ventura lost to Ben Schlottman 5 and 4 and superstar freshman Matthew Wolff fell 2 and 1 to Trace Crowe, who also won a key match against OU’s Quade Cummins in the morning to lift Auburn into the semfinals.

“We still haven’t played our best all year but we’ve been getting better,” Alabama coach Jay Seawell said. “You saw a little bit of that today.”

Seawell said his team began to click in the SEC Championship, which is also a match play format.

Taking on the top-ranked Cowboys on their home course is an opportunity Alabama relishes. OSU had a decided advantage in fan support in 2014 at Karsten Creek, but probably nothing like the expected turnout for the finals.

“There will be thousands of people out here,” Seawell said. “I appreciate how they support golf here. I know we’ll hit good shots and there won’t be a sound except for a couple of parents clapping. That’s just the way it is and that’s okay. They’ve got a great team and we’ve got really good team as well. I think we can give them a great match.”

“Oklahoma State has a really good team but so do we,” said Alabama’s Lee Hodges. “We’re playing this golf course well right now. We’ll give it all we’ve got tomorrow and see what happens.”

Many former Oklahoma State golfers were supporting the Cowboys at Karsten Creek Tuesday. On the ninth hole alone, we bumped into Scott Verplank, Tom Jones, E.J. Pfister, Jeff McMillian, Chris Tidland, Tim Fleming, Brian Montgomery and Sam MacNaughton. David Edwards and Lindy Miller were there Monday and may have been Tuesday as well.

Tickets: Tickets for the championship final match are available to purchase at the Karsten Creek entrance or atokstate.com/ncaagolf.