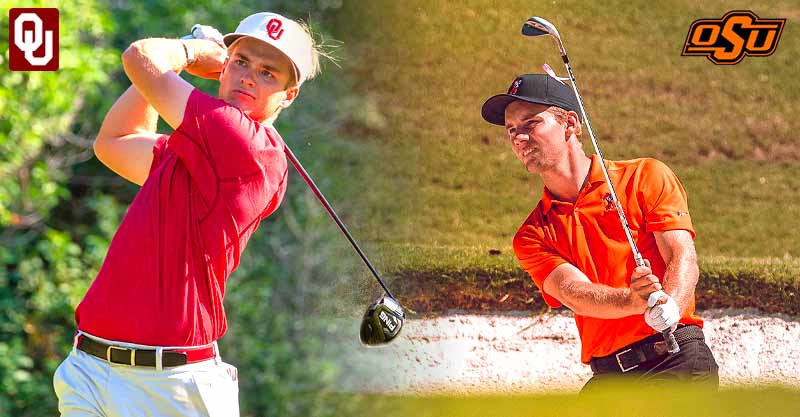 FORT WORTH– Oklahoma State’s men’s golf team wrapped up play at the Ben Hogan Collegiate Invitational with a sixth-place showing on Tuesday at Colonial Country Club. The University of Oklahoma tied for 12th in the 16-team field.

Individually, Gustav Frimodt of TCU closed with a 65 to finish at 202 and one shot clear of the field.

A pair of Cowboys finished inside the top 20 with junior Jonas Baumgartner and fifth year Rasmus Neergaard-Petersen each sharing 19th place at 210.

Both players closed with rounds of 71.

Junior Bo Jin posted a 70 during his third round to finish at 214 and tied for 37th place.

Freshman John Wild posted the low round of his Cowboy debut, finishing with a 1-under 69 to finish at 218 and tied for 58th place. Wild made the turn at 1-over 36 after carding a bogey at the fifth. He moved back to even with a birdie at the 12th and added another at the 14th. After posting a bogey at the 16th, he closed with a birdie at the 18th to move back under par for the day.

The Cowboys will continue their fall slate on Oct. 10 at the Jackson T. Stephens Cup at Seminole Golf Club.

Oklahoma shot its best round of the tournament Tuesday, posting a 2-over 282.

Oklahoma (855, +15) finished tied with No. 8 Georgia Tech for 12th in the 16-team field that featured 13 ranked teams, including seven of the top-10 teams in the latest coaches poll. The No. 2-ranked Sooners played the event without their highest-ranked player, Patrick Welch, who makes his PGA TOUR debut this week at the Shriners Children’s Open in Las Vegas.

Luke Kluver and Stephen Campbell Jr. led the Oklahoma contingent with matching 69s (-1), joining Jase Summy with a round in the 60s at Colonial.

The 12th-place finish snapped Oklahoma’s 27-tournament streak of top-five team finishes, which dated back to the start of the 2020-21 season. Oklahoma finished seventh at the 2020 Southern Highlands Collegiate, the team’s final tournament before the rest of the 2020 season was canceled. During the streak, the Sooners won 12 tournaments, the most successful two-year stretch in program history.

Head coach Ryan Hybl and his team will look to rebound at the Big 12 Match Play Championship, slated for Oct. 17-19 at the Golf Club at Houston Oaks.