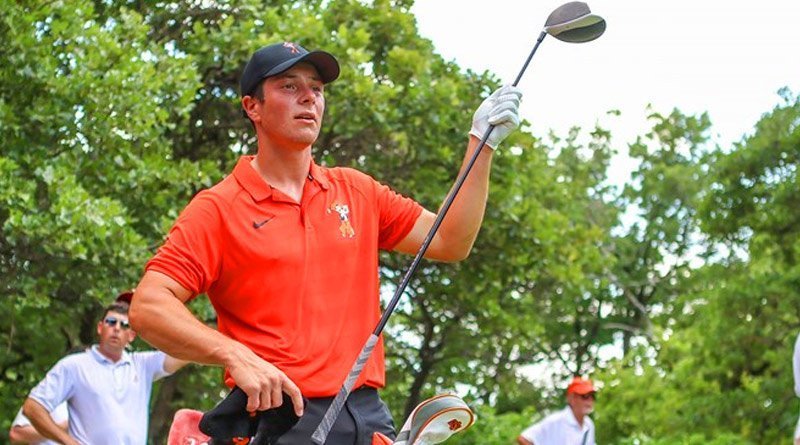 WHITE SULPHUR SPRINGS, W. Va. – Behind a strong second-round performance, Oklahoma State’s men’s golf team moved to the top of the leaderboard at the Big 12 Championship after 36 holes at The Greenbrier on Saturday.

The top-ranked Cowboys will take an eight-shot lead into tomorrow’s final round at the event, which was shortened from 72 to 54 holes due to inclement weather yesterday. The Cowboys posted a 2-under 278 during Saturday morning’s round to trail TCU by five shots before responding with a 268 to stand at 14-under 546 at the par-70, 7,201-yard layout.

No. 7 Oklahoma shares third place with an overall 2-under 558. The Sooners carded a 282 to open Saturday’s action before following up with a 4-under 276 in the afternoon.

A trio of Cowboys finished the day inside the top 10 with Viktor Hovland leading the way. The junior followed an opening 68 with a bogey-free 64 to share first place with TCU’s Hayden Springer at 8-under 132. Beginning his afternoon round on the inward nine, Hovland posted birdies at Nos. 12, 14, 16 and 17 to turn in 4-under 32. He added birdies at the first and ninth for a matching 32 on his second nine.

He will be looking to become OSU’s 49th conference champion and its second consecutive Norway native to win the event after Kristoffer Ventura shared medalist honors a year ago.

Matthew Wolff shaved three strokes off an opening 70 with a 67 during his second round to grab sole possession of fifth place at 3-under 137. Like Hovland, the sophomore posted a clean scorecard with birdies at Nos. 2, 17, and 18 to improve his standing.

Sophomore Austin Eckroat carded a pair of 69s to finish the day tied for sixth place at 2-under 138.

Classmate Hayden Wood rounded out the OSU lineup with scores of 71 and 77 to finish at 148 and tied for 41st place.

The Cowboys will enter tomorrow’s final round looking for their 55th conference crown and first since 2011. OSU will be paired with TCU and will get its final round underway at 8:30 a.m. (CST).

The Big 12 Championship was originally scheduled for 72 holes, but shortened to just three rounds on Friday due to inclement weather. All 10 teams played 36 holes Saturday. The tournament is being held at the par-70, 7,201-yard Old White Course at The Greenbriar in White Sulphur Springs, W. Va.

“There is a great opportunity in front of us for tomorrow and it will need to be special, but these guys can do it,” OU head coach Ryan Hybl said.

Junior Garett Reband and freshman Patrick Welch paced the Sooners during Saturday’s 36 holes, finishing in a tie for eighth place with a two-round 139. Both players posted an even-par 70 during the opening round and followed up with a 69 in the afternoon session.

Reband finished the day strong by shooting 3-under on the back nine in the second round, posting three birdies and picking up an eagle on hole No. 17. Welch led the Sooners with eight birdies during Saturday’s two rounds.

Redshirt junior Quade Cummins started the day with a 74, but rebounded with a 67 during the afternoon session to card an overall 141. The Weatherford, Okla., native shares 18th place with one round remaining. Cummins opened the second round with four straight birdies and later carded an eagle on the par-4 hole No. 10.

Senior Blaine Hale is tied for 21st place at 142 through 36 holes. Hale logged an even-par 70 to begin the day before recording a 72 during the second round.

Senior Brad Dalke opened the day with a 72 and followed up with a 71, bringing his 36-hole total to 143. The senior is tied for 25th place after two rounds.

The final round of the Big 12 Championship is scheduled for Sunday. OU’s final round will begin at 7:45 a.m. CT. The Sooners will be paired with Texas and start the final round from hole No. 1.

Live scoring is available on GolfStat.com<http://results.golfstat.com/public/leaderboards/gsnav.cfm?pg=team&tid=18092