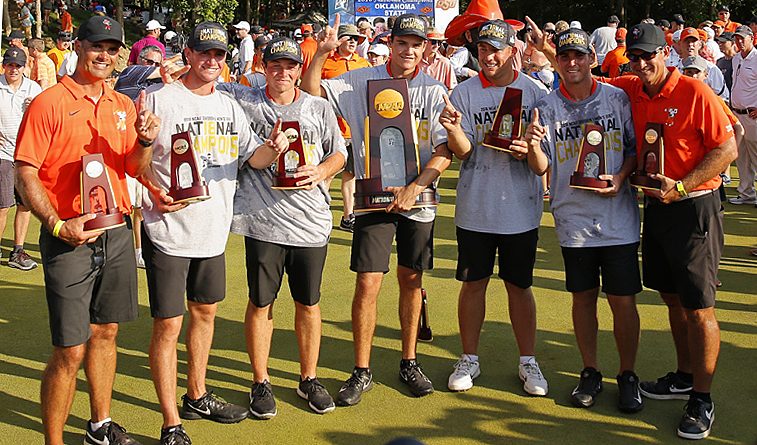 STILLWATER  – Viktor Hovland grew up in the cooler climes of Norway, but he now thrives in the heat of Oklahoma.

Hovland, the first Oklahoma State player off the No. 1 tee at Karsten Creek in the match play finals of the 2018 NCAA Championship, birdied the first hole, five of the first nine and set the tone for a crushing Oklahoma State 5-0 rout of Alabama before thousands of enthusiastic Cowboy fans.

The national audience on Golf Channel must have been stunned by the turnout for a sport that normally draws in the hundreds, but it was the culmination of a dream scenario for the network and the Cowboy faithful. OSU has one of the more powerful teams in its storied history and it saved its best for the last of its school record 11 victories this season.

One Alabama player after the next took the microphone in the post-tournament press conference to say he thought he had been playing well only to be scorched by his OSU counterpart.

“Viktor just played really well,” said Alabama’s Lee Hodges, who was several under par on his own ball when Hovland closed him out 4 and 3 with seven birdies. But Hovland wasn’t even the first player in, as the last to tee off Zach Bauchou routed Jonathan Hardee 8 and 7, shooting a 29 on the front nine including a hole out from the front bunker for eagle on the par-5 ninth.

“Shooting a 29 on the front doesn’t lose a lot of matches,” Hardee said. “It was a great environment and they fed on it really well. Zach played some incredible golf.”

It was the same story for Davis Riley, who ran into sensational freshman Matt Wolff, played 2-under on his own ball and lost 4 and 3 when Wolff ran in the championship clinching 15-foot birdie putt on the par-3 15th, setting off a raucous celebration that was later repeated on the 18th green during the official trophy presentation.

“I was 2-under and got throttled,” Riley said. “I just ran into a really good Matthew Wolff today and we all ran into a really good Oklahoma State team. There was not too much I could have done differently. It’s pretty hard to beat somebody who’s playing like that, out here especially. They’re comfortable with the track and they just off the crowd. It was like a football game out there.”

When Wolff’s putt went in, Austin Eckroat and Kristoffer Ventura, both on the par-5 14th hole and ahead in their matches, were able to pick up and join the celebration. Eckroat, the Edmond North product who won all three of his matches after a top-20 finish in stroke play, was mobbed by his teammates after he arrived, as was Ventura, the best Oklahoma State player ever from Norway until Hovland showed up.

Bauchou, the candid junior from Virginia, said he had told OSU athletic director and former golf coach Mike Holder, winner of eight national titles as head coach and the man who led the building of Karsten Creek, that this was the best Cowboy team in history. Holder told him to get lost, but Bauchou said they would have lunch after the national championship and reopen the discussion.

As Alabama coach Jay Seawell said, it takes time to judge the greatness of a team and much depends on what they do in the future. On this day, however, none of Holders teams would have had an easy time with this Cowboy team.

Wolff eagled the par-5 first hole after Hovland’s birdie and the roars were soon echoing in the ears of the Alabama players with annoying frequency.

“They are very good,” Seawell said. “It was a great environment. It hurts a little when you’re getting it handed to you, but it’s a testament to Oklahoma State golf and what they mean to this town and also what college golf has become.”

Bratton gave credit to the fans and numerous former players in attendance, as well as his coaching predecessors Labron Harris, Holder and Mike McGraw, each of whom had won at least one national championship. Bratton is now in that group and this team could return at least four of five starters, as Ventura was the lone senior who started.

“One of the good signs at the start of the day, too, was as we pulled into the parking lot, the first two guys that we saw were Lindy Miller and David Edwards,” Bratton said. “ Lindy is arguably the best player that Oklahoma State has ever had, and David Edwards won the national championship in 1978, and this was the 40th anniversary of that. We wanted to honor that team, and Lindy was on that team, as well. That was the first two people that we saw, so I thought that was a wonderful sign of things to come for today.”

Miller and Edwards were two of dozens of former Cowboy players among the crowd of 3,042. Spurred on, the Cowboys threw 22 birdies and two eagles at the overwhelmed Crimson Tide and no match went beyond the 15th hole. 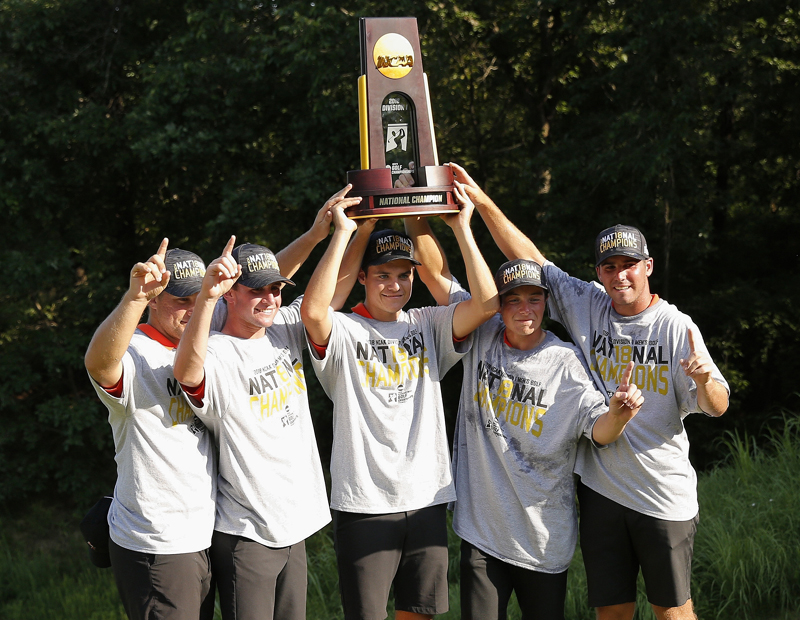 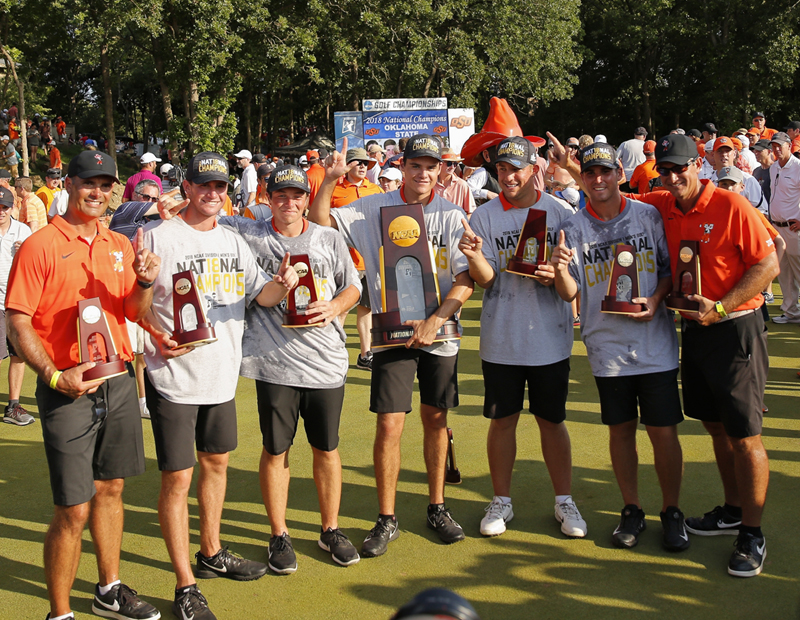 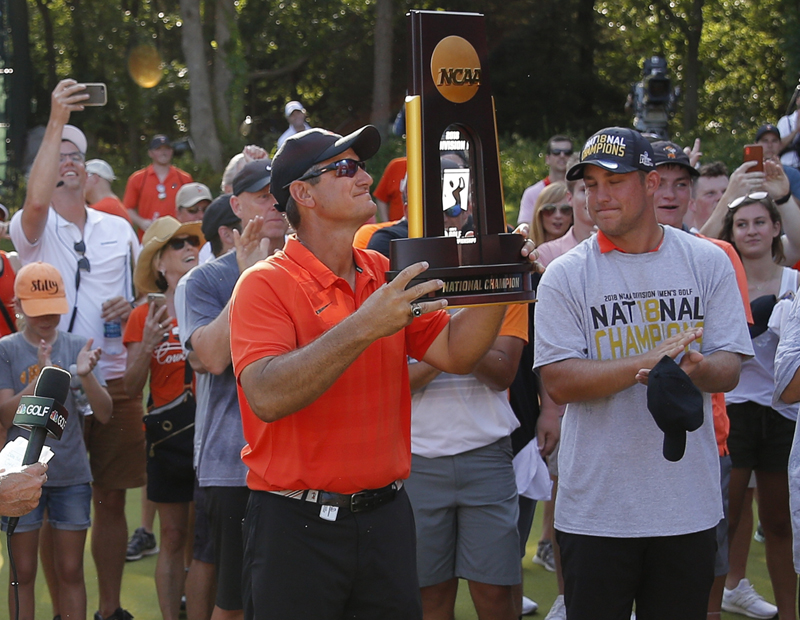 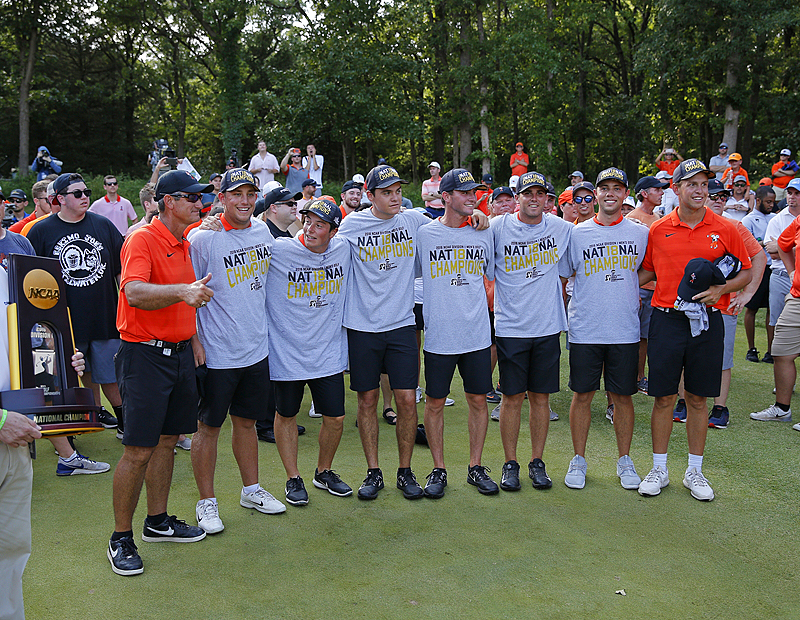 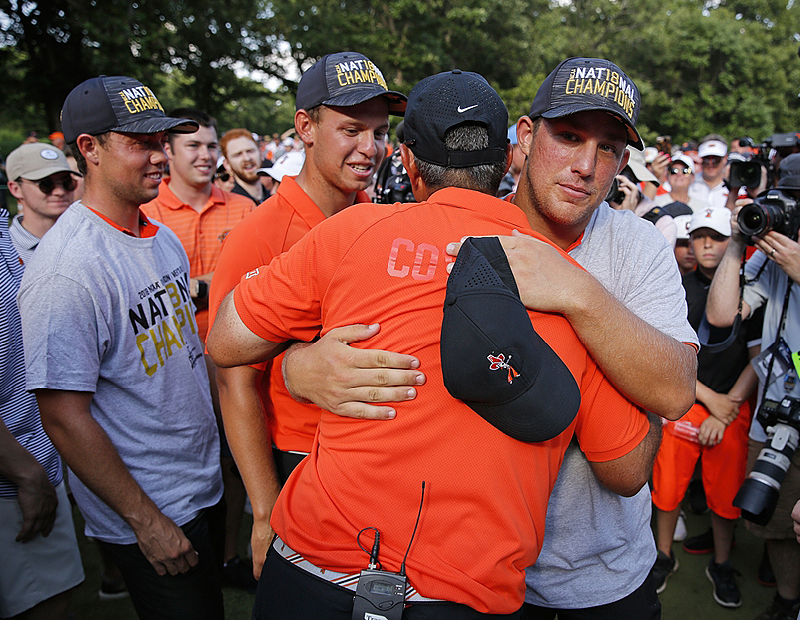 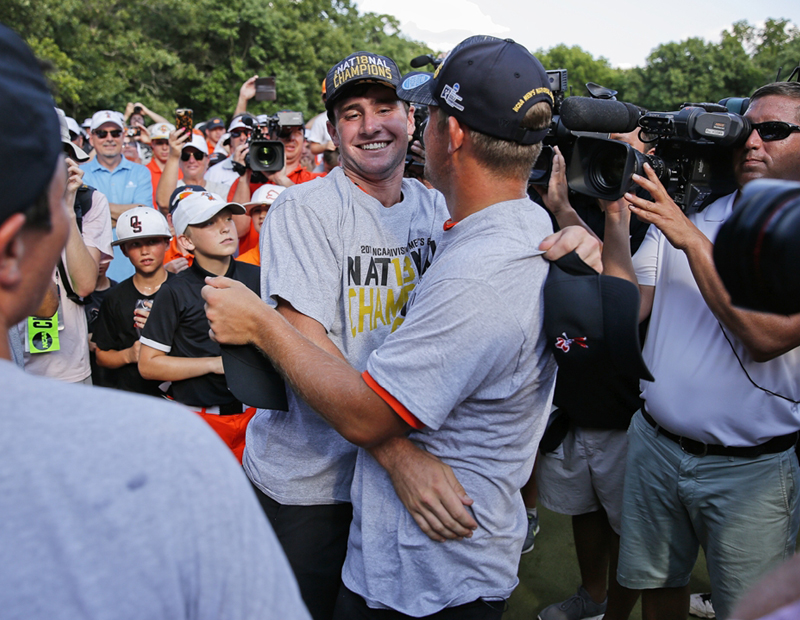 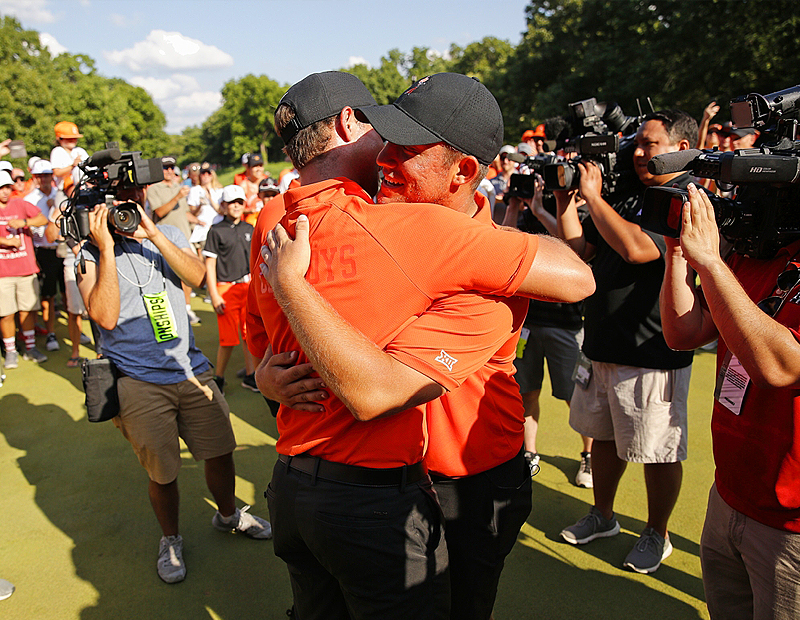 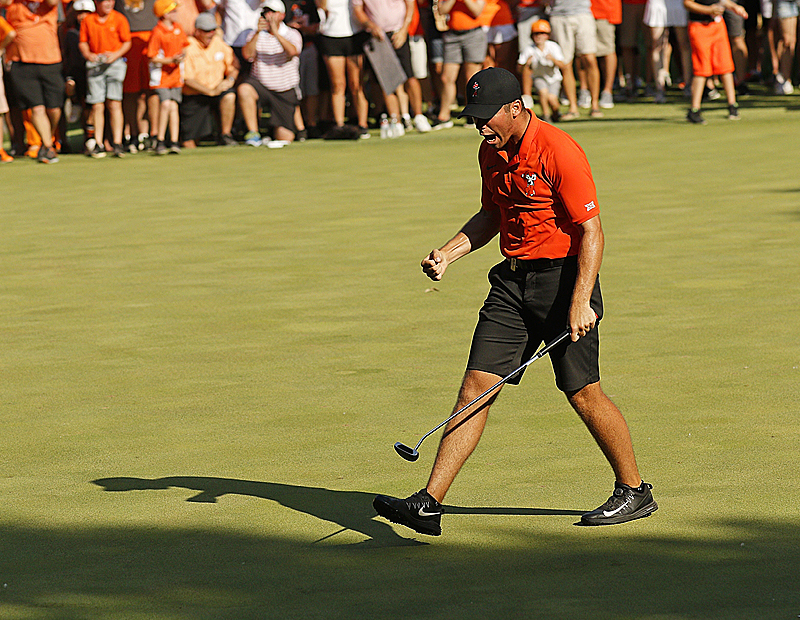 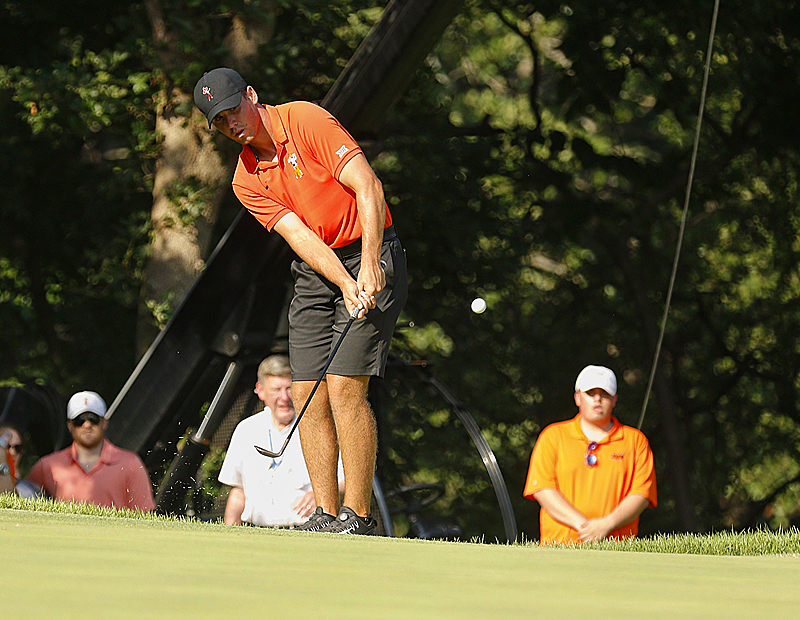 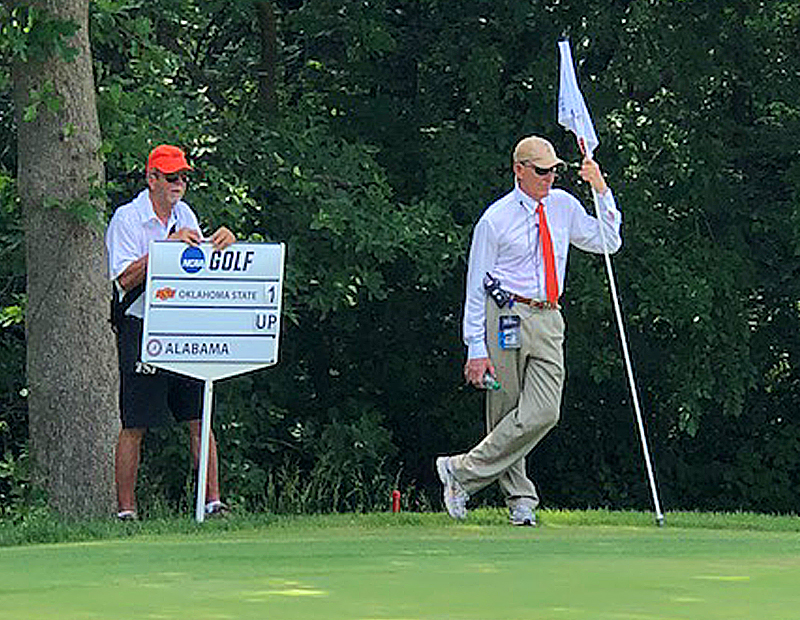 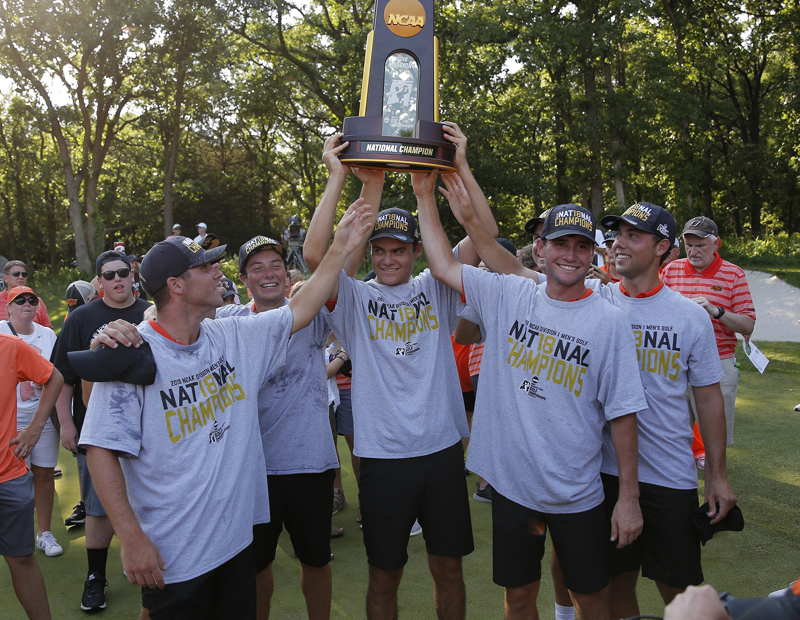 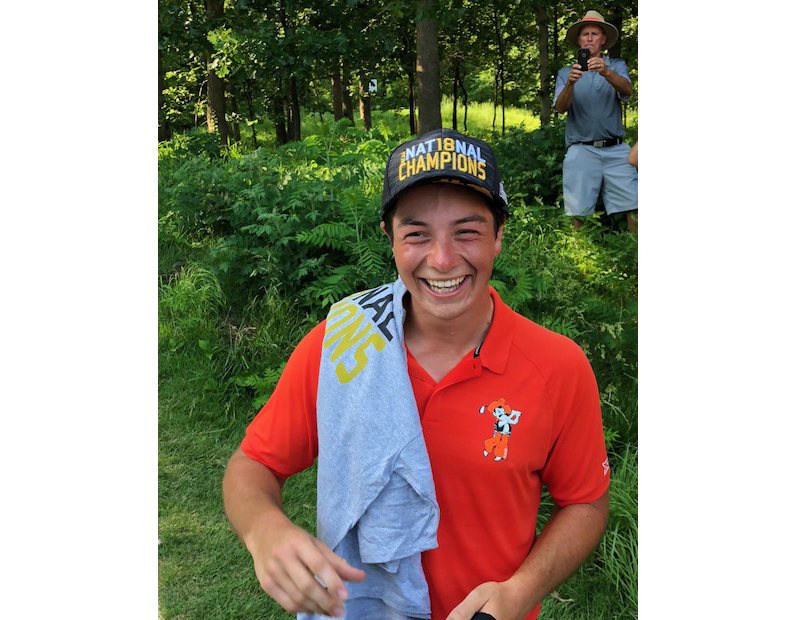 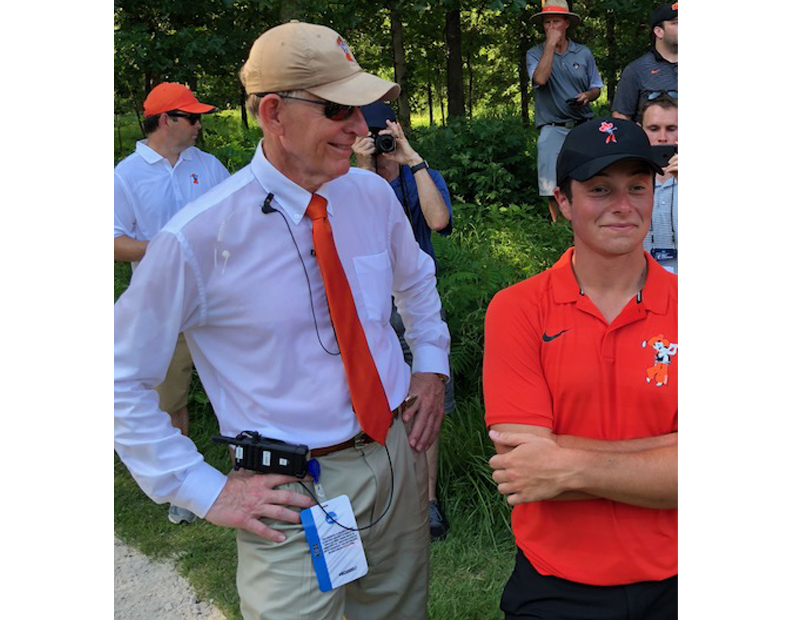 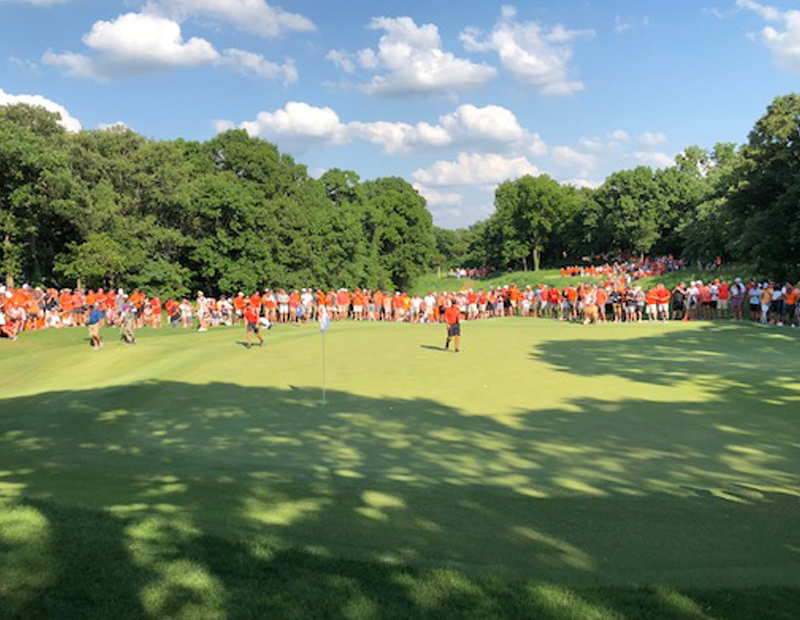 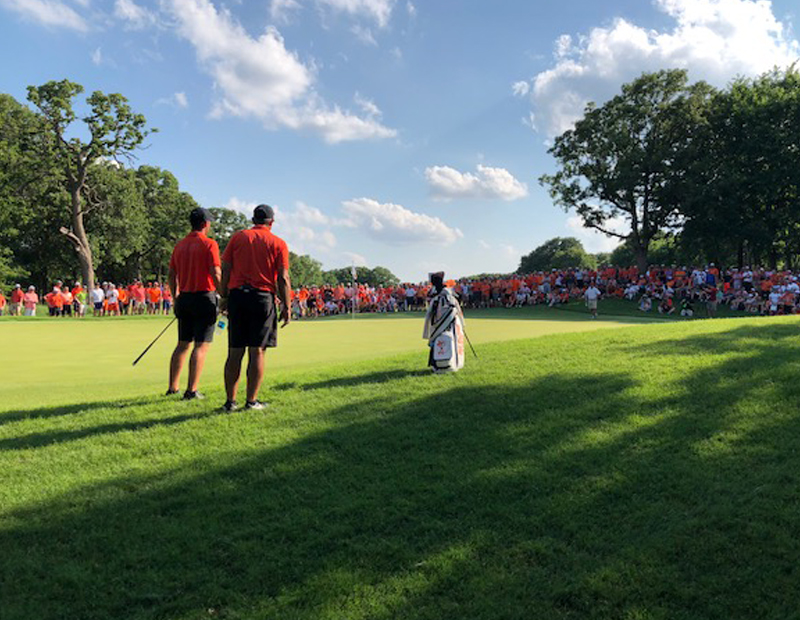