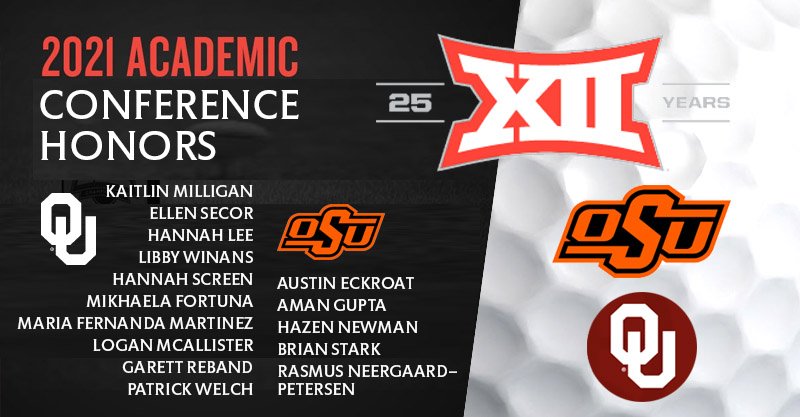 IRVING, Texas – Oklahoma State’s men’s golf team had six players honored for their work in the classroom today with the announcement of the Academic All-Big 12 Golf Team by the league office.

The men’s team was comprised of 56 honorees, while 50 women received the distinction. Senior Ferdinand Müller was among the 12 student-athletes recognized with a 4.0 grade point average.

Austin Eckroat, a university studies major, was tabbed as a member of the squad’s second team.

First-team members consist of those who have maintained a 3.20 or better GPA while the second-team selections hold a 3.00 to 3.19 GPA. To qualify, student-athletes must maintain a 3.00 GPA or higher either cumulative or the two previous semesters and must have participated in 20 percent of their team’s scheduled contests. Freshmen and transfers are not eligible in their first year of academic residence.

This is the second career Academic All-Big 12 nod for Han-Hsuan Yu, while Lianna Bailey, Isabella Fierro, Hailey Jones and Maja Stark earned the award for the first time.

This extends Oklahoma State’s streak of having multiple players selected for the Academic All-Big 12 team to 10 straight years dating back to 2012. Since the league formed in 1996-97, Cowgirl golfers have combined for 70 Academic All-Big 12 selections, including 10 under second-year head coach Greg Robertson.

Stark is one of just six women’s golfers recognized with a perfect 4.0 GPA. The Pre-Psychology major is currently ranked as the No. 6 amateur golfer in the world, and has two wins this spring to go with the lowest single-season stroke average in school history.

Fierro is following up on a 2020 season that included WGCA All-American Scholar and a WGCA All-America honors. The University Studies major owns a career average of 71.04 (-0.82), which is the lowest ever by an OSU player with at least 45 rounds.

Yu is also a 2020 WGCA All-American Scholar and Academic All-Big 12 honoree, and is majoring in Recreational Management at OSU.

Bailey, a Psychology major, won a pair of events in 2020-21 and is currently ranked among the top-60 collegiate golfers in the country.

Jones is celebrating her first Academic All-Big 12 nod after a solid sophomore campaign that included a 4.96 scoring average on par-5 holes in six starts for the Cowgirls. The Dallas native is majoring in Human Development & Family Sciences.

The Cowgirls return to the course on Monday at the NCAA Regional in Stanford, California. Oklahoma State earned a No. 2 seed and is currently ranked No. 6 by GolfStat.

Ten Oklahoma golfers, comprised of seven women and three men, garnered 2021 Academic All-Big 12 honors, it was announced by the conference on Wednesday.

Out of the 106 total honorees, only 12 were recognized for having a 4.00-grade point average, including OU women’s golf seniors Kaitlin Milligan and Ellen Secor.

Maria Fernanda Martinez was named to the women’s second team, marking her first appearance on the academic team.

A trio of men’s golfers made the second team as Logan McAllister, Garett Reband and Patrick Welch posted a 3.00 GPA or higher this year, earning academic honors for the first time in their careers.

For the women’s team, the accolades bring the program’s all-time honoree total to 105, pacing the Big 12. The men’s 77 all-time selections are the third-most in the conference.

Both teams are competing in the postseason on the course this month. The women’s team is the No. 9 seed in the Columbus Regional, slated for May 10-12. The men’s team is the nation’s No. 1 overall seed and will compete in the NCAA Albuquerque Regional on May 17-19.