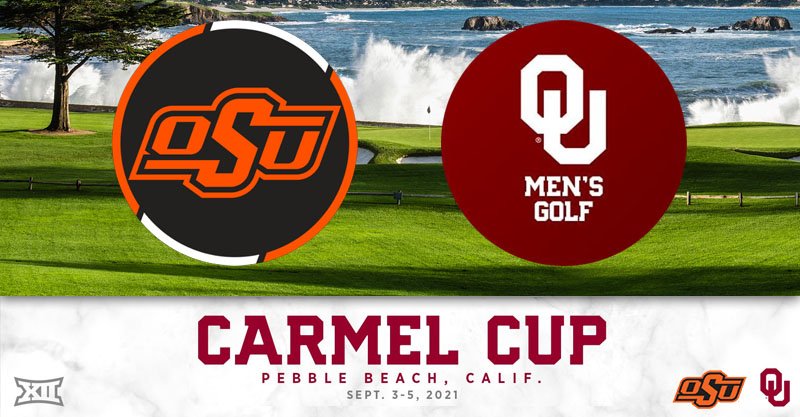 PEBBLE BEACH, Calif. — No. 2 Oklahoma State and No. 7 Oklahoma are set to open the 2021-22 season this weekend at the Carmel Cup in Pebble Beach, Calif. Played at the famous Pebble Beach Golf Links, the Sooners and Cowboys will tee off against what Golfweek has called the most formidable field in college golf.

The six-count-five, 54-hole tournament features eight teams, with half of the field ranked inside the nation’s top 10. The Sooners, led by 13th-year head coach Ryan Hybl, tee off starting at 10:10 (CT) Friday with Georgia, Mississippi State and TCU. OSU, led by coach Alan Bratton, will begin its first round at 9:10 a.m. and will be grouped with Texas Tech, Vanderbilt and Arkansas.

The Cowboys enter the season ranked second nationally and will be looking for their fourth title at the event. OSU won the tournament on three consecutive occasions, finishing first in 2015, 2016 and 2017. Matthew Wolff won the individual title in 2018.

The Cowboys are coming off a 2020-21 campaign that saw them win five times and produce three All-Americans, including Chacarra, a first-team pick, and Jin, a second-team selection.

The Sooners enter the season ranked seventh nationally after a 2020-21 campaign that saw the team set records and finish as the national runner-up. Gone from the roster are All-Americans Quade Cummins, Garett Reband and Jonathan Brightwell, but Hybl has reloaded his team with All-Americans Logan McAllister, Patrick Welch and 2020 Big Ten Player of the Year Chris Gotterup, who arrives in Norman from Rutgers.

It’s an interesting lineup joining the three All-Americans for the first event. Senior Blake Lorenz, older brother of Ben Lorenz who made a splash at the 2021 NCAA Championship in the spring, is making his second appearance ever for the Sooners. Also earning starts in the six-man lineup are sophomore Stevphen Campbell Jr. and highly-touted freshman Drew Goodman of Norman.

Oklahoma has made Pebble Beach a second home, playing in the last six renditions of the Carmel Cup. The Sooners won the event in 2018 and finished as the runner-up in 2019, and own a top-four finish in five of the last six Cups.