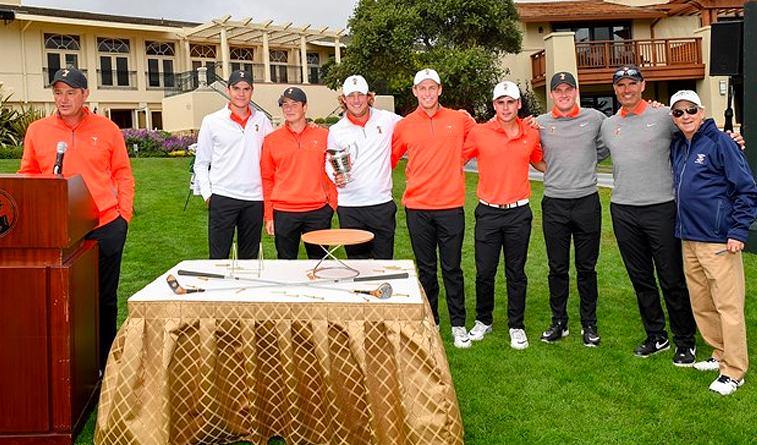 The Cowboys, who have won the event each of the past two years, will begin play on Friday at 7 a.m. (PST) and will be grouped with Ohio State, TCU and Georgia at the par-72, 6,828-yard layout. The event will consist of 54 holes and will run through Sunday. Vanderbilt, Texas Tech and Arkansas will comprise the remainder of the field.

Last year, OSU closed with a 16-under round of 344 en route to an eight-shot victory and to repeat as champion at the historic venue.

The Sooners are starting the year at No. 3, the best preseason ranking under ninth-year OU head coach Ryan Hybl.

Each team will compete with six golfers, and the low five scores will count toward the team total each round. OU’s lineup for the Carmel Cup will feature seniors Grant Hirschman and Rylee Reinertson, juniors Brad Dalke and Blaine Hale along with sophomores Riley Casey and Garrett Reband.

Four Sooners in OU’s six-player lineup recorded top-25 finishes a year ago at the Carmel Cup.

The Sooners’ tee times are scheduled to begin at 10 a.m. CT on Friday, and they will be paired with Arkansas, Texas Tech and Vanderbilt.

Fifty-four holes will be played over three days. The Sooners’ tee times begin at 10 a.m. CT on Friday from hole No. 7, and the team will be paired with Arkansas, Texas Tech and Vanderbilt.

Friday: Sunny with a high of 77 degrees and wind out of the northwest at 5-10 mph. Zero percent chance of rain.

Saturday: Mostly sunny with a high of 81 degrees and wind out of the west, northwest at 5-10 mph. Zero percent chance of rain.

Sunday: Partly cloudy with a high of 74 degrees and wind out of the west, northwest at 5-10 mph. Zero percent chance of rain.

This appearance marks the Sooners’ fourth consecutive season beginning at the Carmel Cup. Last year, OU finished in fifth place with a three-round 1063 (-17).