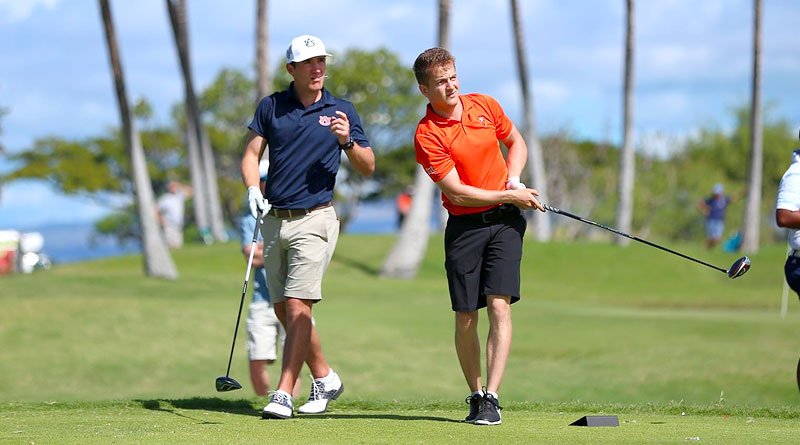 WAIKOLOA, Hawaii – Oklahoma State’s men’s golf team climbed two spots during the final round of action on Saturday at the Amer Ari Invitational to finish in fourth place at Waikoloa Kings’ Course.

The Cowboys fired their low round of the event, a 17-under 271, to finish at 35-under 829 and one shot out of third place, which was held by Arizona State. OSU finished just two shots behind runner-up Texas and four shots behind tournament champion Pepperdine at the par-72, 7,074-yard layout.

All five members of OSU’s starting five broke par during the third round with three Cowboys turning in sub-70 rounds.

Sophomore Aman Gupta posted a 71 to finish in a tie for third place at 12-under 204 and just a shot behind Pepperdine’s William Mouw and Arizona State’s Mason Andersen for the top spot on the leaderboard. Mouw won a playoff with Andersen to claim medalist honors.

The finish was the best of the season for Gupta and his third top 10 of the year.

Senior Ferdinand Müller vaulted 21 spots into the top 10, tying for 10th place after carding the squad’s low round, a bogey-free 66. Müller started his day on the fourth hole, posting birdies at the fourth and fifth before tallying eight consecutive pars. He added birdies at the 14th and 18th for a second nine of 2-under 34. Müller tacked on birdies at the first and second for a front side of 4-under 32.

Freshman Brian Stark matched Müller’s 66 to climb 39 spots into a tie for 28th place at 5-under 211. After carding a double bogey on his second hole, Stark rallied with birdies at Nos. 10 and 12 before moving under par with a birdie and eagle to close out his back nine with a 5-under 31. Stark added birdies on three of his final five holes to move to 6-under for the day.

Junior Austin Eckroat carded a 69 to move up 12 spots into the group tied at 211.

Sophomore Rasmus Neergaard-Petersen used a closing 70 to rise 18 spots into a tie for 49th place at 215.

Freshman Dillon Stewart competed individually and closed with a 74 to tie for 65th place at 217. Complete results are here.

The Cowboys will resume action on Feb. 17 when they begin play at The Prestige at PGA West.