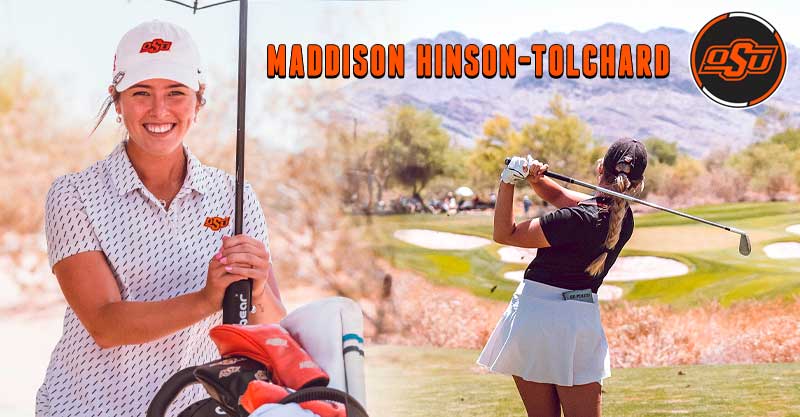 SCOTTSDALE, Ariz. —- Oklahoma State women’s golf’s Maddison Hinson-Tolchard carded a 1-over 73 in the final round of stroke play on Monday in the 2022 NCAA Women’s Golf National Championships at the Grayhawk Golf Club in Scottsdale, Ariz.

Hinson-Tolchard finished her four rounds of stroke play tied for 31st at 8-over at the par-72, 6,340-yard layout.

“It felt like a bit of a rollercoaster week,” she said. “There was a lot of good and a lot of kind of average stuff. I think it was solid overall. That 4-under still tops off the week overall. Even today I made another eagle and holed-out another bunker shot for that one. It was a good week all around. I’m very happy.”

Hinson-Tolchard started her round on No. 10, and after two bogies to open the 18-hole day she steadied out the round with three-straight pars starting on No. 12. Putts started to fall on the backend of her opening nine holes as she birdied No. 16 and No. 18 to finish the final three holes in style and made the turn at 1-over.

After tough start on No. 1, her tenth hole, Hinson-Tolchard recorded her second eagle of the weekend on the par-5 fourth as she holed one in directly from the bunker into the cup without touching the green. A birdie on No. 7 and two pars closed out the weekend and season.

Her two eagles tied for the most in the field through stroke play.

“There’s definitely momentum going into next year,” Hinson-Tolchard said. “I’m going to go back home and have some time off and see my coach and get back into the swing of things in July. But as a team we’re still really deep and strong and everyone is going to be preparing for the fall and getting ready for a bigger and better year.”

Oklahoma State closed the season with a 19th-place finish in the National Championships after advancing through the Stillwater Regional at Karsten Creek Golf Club. The Cowgirls won four tournaments this past year, and never finished outside the top-3 in any of their regular season tournaments.

“She played pretty steady today,” head coach Greg Robertson said. “Got off to a bit of a rough start but held it together. That eagle on the fourth, her thirteenth hole, was big. Little momentum changer there. Looks like she’s going to have a solid finish this week and hopefully put her in position to become an All-American.”