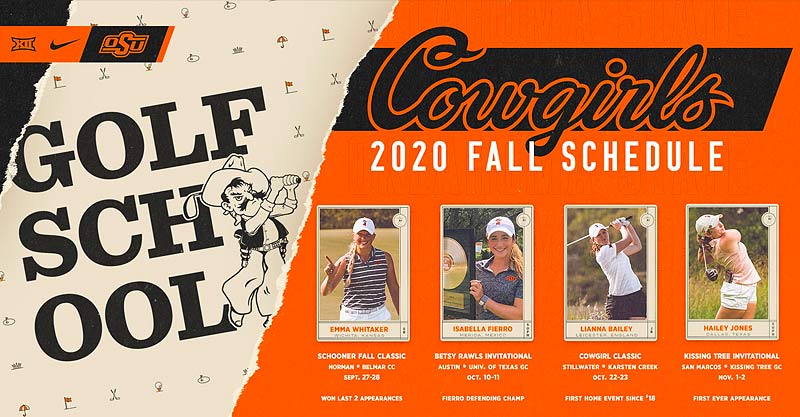 STILLWATER ­­­– The Oklahoma State women’s golf team will play in-state twice this fall, including an event at Karsten Creek on Oct. 22-23, in addition to pitting the Cowgirls against the nation’s best teams with the goal of making the program’s 22nd NCAA Championship appearance.

Under the leadership of head coach Greg Robertson, the Cowgirls will compete in nine events before traveling to The Woodlands, Texas, to compete for their 10th Big 12 championship on April 18-20.

The Cowgirls will open their season on Sept. 27 just up the road at the Schooner Fall Classic being held at the Belmar Country Club in Norman, Oklahoma. The Cowgirls have won in each of their last two appearances at this event, posing for photos with country music star Toby Keith both times.

OSU will then travel to Austin to compete in the Betsy Rawls Longhorn Invitational (Oct. 10-11). Freshman Isabella Fierro set the record for the lowest 54-hole score in Cowgirl golf history by four strokes during their last tournament appearance. The team finished in third place behind two top-ten opponents.

Oklahoma State will host the Cowgirl Classic (Oct. 22-23) at Karsten Creek in Stillwater, Oklahoma to round out their fall season. The classic is the first time OSU has hosted a tournament at Karsten Creek since the NCAA Championships in 2018.

OSU will round out the fall campaign at the Kissing Tree Invitational in San Marcos, Texas. The event is hosted by Texas State, which is led by former Cowboy golf great and former Cowgirl assistant coach Par Nilsson.

The Cowgirls tee off the spring season with the LTWF Heroes tournament in Sarasota, Florida hosted by Purdue University (Feb. 7-9). OSU will then travel to The Woodlands, Texas to compete in the ICON Invitational hosted by the University of Houston from Feb. 22-23.

OSU is set to return to the Arizona Wildcat Invitational in Tucson, Arizona (March 8-9) for the first time since 2013 where they recorded a 13th place finish.

The Cowgirls will travel to the Sunshine state for the Briar’s Creek Invitational (March 15-16) in John’s Island.

The Cowgirls will close out the regular season at the Bruzzy Challenge in Carrollton, Texas on March 29-30. The event is hosted by University of North Texas and this will be the first time in program history that OSU has competed in the tournament.

The NCAA Regionals are slated for May 10-12, followed by the NCAA Championships in Scottsdale, Arizona from May 21-26.