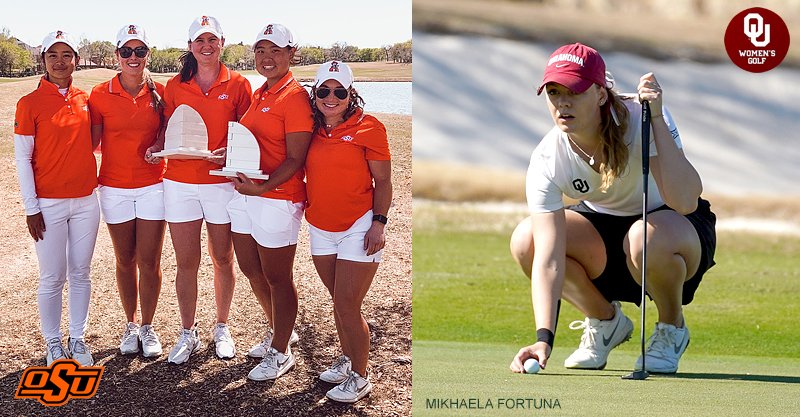 ARGYLE, Texas – The Oklahoma State women’s golf team, led by Lianna Bailey, took home both the individual and team titles at The Bruzzy, capturing their third victory of the season. The University of Oklahoma placed fourth in the event.

For the first time since 1999, the Cowgirls took home the individual and team titles in back-to-back tournaments. OSU finished 15-under 849, and their second round 273 is the second lowest round in school history.

The team victory is head coach Greg Robertson’s fourth at OSU and the 96th in program history. This marks the first time OSU has won three or more events in a season since 2015-16.

Han-Hsuan Yu had one of her strongest performances of the season finishing 1-under 215 and in a tie for ninth place. She recorded her lowest score of the season with a 70 in the second round and notched 12 birdies.

Maddison Hinson-Tolchard had a career low 69 in the second round and finished 2-over 218 and in a tie for 18th.

Hailey Jones and Rina Tatematsu finished at 4-over and 5-over respectively. Jones recorded a career low 70 in the first round of play and finished in a tie for 29th.

The Cowgirls rolled even though two of their top players, Maja Stark and Isabella Fierro, were absent while preparing to play in the Augusta Women’s National Amateur.

The Cowgirls will host one final tune-up event, the Cowgirl Match Play, on April 11-12 at the Stillwater Country Club. Then OSU will look for their 24th conference title at the Big 12 Championship at the Club at Carlton Woods in The Woodlands, Texas on April 18-20.

The Sooners finished at 6-over after a 7-over 295 in breezy conditions Monday and held off No. 17 Houston to grab fourth place at the 15-team tournament.

“It was a tough day for us out there,” said coach Veronique Drouin-Luttrell. “We played stressed out, and it hurt us both days. It’s nice to finish inside the top five, but we’re capable of so much more. We’ll get back to Norman and work on some things as we prepare for the match-play event up in Stillwater in a couple of weeks.”

Fortuna shot 72 Monday and  finished in a tie for 13th. The junior led the field with 41 pars and paced OU in par-three scoring (3.00) to lead the team for the fifth time in 18 career events.

Libby Winans shot 74 to finish tied for 22nd with teammate Maria Fernanda Martinez. Martinez shot the lowest final two rounds on the team, carding a 71 in Sunday’s second round and a 72 on Monday to finish T22.

Hannah Screen collected a team-high 15 pars on Monday but could not find a birdie, marking just the second time she’s gone without a birdie in a round as a Sooner. She shot 75 and finished tied for 29th.

Kaitlin Milligan (carded a 76 but closed with three birdies on the back nine. The senior will now turn her attention to the Augusta National Women’s Amateur, which features the top amateur women’s golfers in the world and tees off on Wednesday in Augusta, Ga. Milligan was extended the invitation after previously accepting an invite to the 2020 ANWA, which was canceled due to the COVID-19 pandemic. She follows former Sooner Julienne Soo, who competed at the inaugural ANWA in 2019. Oklahoma joins Texas as the only Big 12 school to have a student-athlete appear in both tournaments.

The Sooners will now focus on a match-play event at Stillwater Country Club in April to close the regular season before traveling to Houston for the Big 12 Championship on April 18-20.