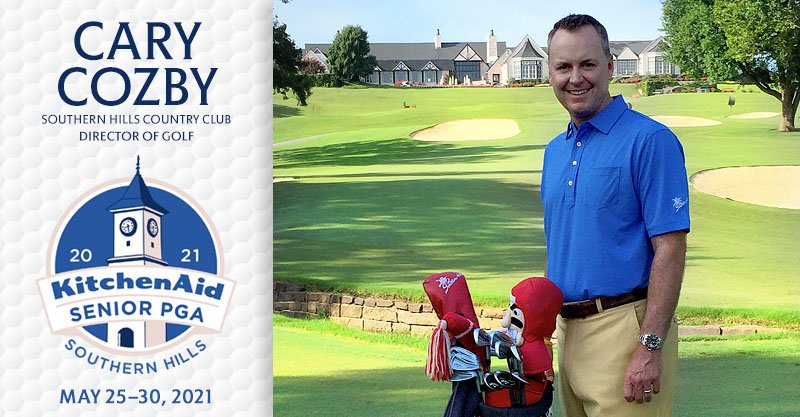 Cary Cozby has played in high-pressure events from the NCAA Championship to the U.S. Amateur and six Professional National Championships, the Super Bowl of tournaments for those pros who work at a golf course for a living.

He found out Sunday morning while scanning his email that he would soon be playing on one of the grandest stages of his life. In his inbox was a special invitation from PGA of America President Jim Richardson for the Southern Hills Director of Golf to compete in the KitchenAid Senior PGA Championship when it is contested May 27-30 at his home course.

“I’m reading my email and of course at this time I’m getting a lot of emails from the PGA,” Cozby said. “I read that one from Jim and had to stop and read it again.”

The first thing he did was show it to his 12-year-old son Banks, whom he next enlisted as his caddy. Wife Staci and mother Karole were “over the moon,” when he let them know. He informed younger brothers Craig and Chance, both of whom followed him to successful careers at the University of Oklahoma and into golf as a profession in various capacities.

And thoughts were immediately directed to the one man who would have been most proud and thrilled to watch him compete in a major championship, father and fellow PGA Professional of the Year Jerry Cozby, who passed away Aug. 23, 2020.

Cozby, 52, missed the chance to qualify for this event last as it was scheduled shortly after his father passed away. That, his long dedication to the PGA of America and the family history with Jerry having been the PGA Professional of the Year in 1985 and a member of the PGA of America Hall of Fame all were certainly good reasons for the PGA of America to extend this invitation.

Cozby will join at least two other former Sooner greats in the field, as Glen Day, with whom he was teammates for one year, and Todd Hamilton, who was still playing and practicing in Norman after having just finished his career, when Cozby arrived in 1987, are both in the event. Day is still a mainstay on the Champions Tour while Hamilton has an exemption as winner of The Open Championship in 2004.

Cozby said he would have to find time between all his regular duties and preparations for the Senior PGA Championship to put some serious practice time in over the next few months but that his game was already in decent shape.

“I haven’t played much but I’ve been practicing some,” Cozby said. “I figured I might be a marker for someone so I was trying to get my game in shape and not embarrass myself. This makes it a little more urgent.”

He will represent the section in the field, as no other SCS professional was among the 35 club professionals who qualified.

There are, however, 30 major champions and 11 World Golf Hall of Fame inductees in the field. Pretty tough competition, even for a guy with a distinct advantage in knowing every fold and mound at Southern Hills, particularly since the restoration by Gil Hanse.

For ticket information, go to www.srpga.com.  Read more about the other 141 players who have been announced in the 156-man field here.