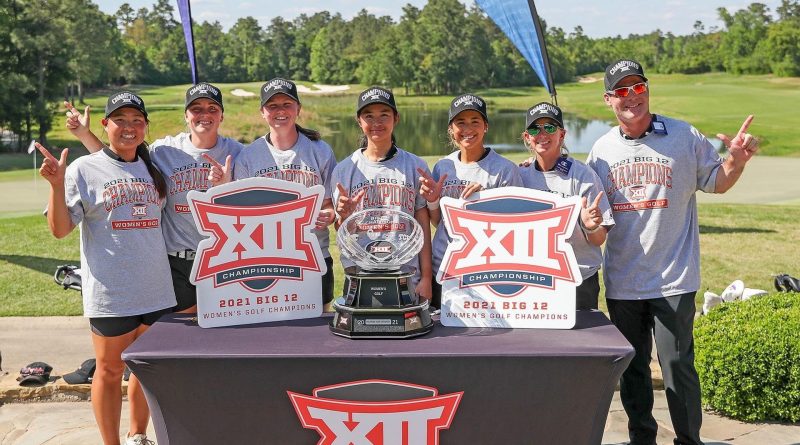 THE WOODLANDS, Texas – The Oklahoma State women’s golf team won the 2021 Big 12 Championship in record-breaking fashion, capturing the program’s 24th conference championship and 10th title in the Big 12 era – four more than any other league foe.

The Cowgirls rewrote the Big 12 record books with blistering performances at The Club at Carlton Woods. OSU set new Big 12 Championship team records for the lowest 18-hole score (270), 36-hole score (549) and shattered the old 54-hole record by 26 strokes after carding the second lowest mark in school history at 34-under 830.

OSU finished 16 shots ahead of Texas Tech, with Baylor another shot back in third and the Oklahoma Sooners taking fourth. OU was just a shot behind Baylor and two shots out of second.

The Cowgirls took turns posting rounds for record books as well. One day after Isabella Fierro recorded the first 7-under 65 in Big 12 Championship history, fellow sophomore Maja Stark posted a 6-under 66 in the third round to earn runner-up honors.

Stark stormed up the leaderboard thanks to six birdies on the back-9 on Tuesday. Her last 18 holes tied for the second best round in Big 12 Championship history, and her final score of 12-under 204 broke the old tournament 54-hole record (set by Cowgirl Kenzie Neisen’s in 2016) by three strokes. Gala Dumez of Baylor bested Stark by two strokes to claim the 2021 Big 12 individual championship.

Oklahoma State head coach Greg Robertson has now won the last seven conference tournaments he has coached at. He and assistant coach Maddi Swaney have coached the Cowgirls to five event wins so far in 2020-21.

Four Cowgirls finished inside the top-10, which marked just the fourth time that has ever happened in the event’s 24-year history. Fierro entered the final round tied for the lead, but a 2-over 74 dropped the All-American into a tie for sixth place. Still, her 7-under 209 is tied for the eighth-lowest score in the event’s history.

Rina Tatematsu was steady all week in The Woodlands, Texas and earned an eighth-place finish in her first conference tournament. The freshman shot 70-69-71 (-6) 210 and led the event with a 4.33 average score on par-5 holes.

Buoyed by a bogey-free 5-under second round, Lianna Bailey earned her first career top-10 finish at the Big 12 Championship. The junior tied for ninth at 5-under 211 and her 13 birdies tied for the seventh most at the event.

Han-Hsuan Yu finished strong with three birdies on her final five holes to finish in a tie for 24th at 4-over 220.

For Oklahoma, Hannah Screen finished in fourth and made the All-Tournament Team to power the Sooners to their fourth-place finish. It’s the Sooners’ 17th top-five finish at the championship and eighth of the Drouin-Luttrell era, which began in 2009.

“We had a great week. It was the first time this semester that we’ve put three good rounds together,” head coach Veronique Drouin-Luttrell said. “I’m so proud of our team for fighting. We came up short and finished just a few shots off of second, but overall it was a great week.”

Screen, a junior from London, shot 69 in the final round to grab the second top-five of her season. She was joined inside the top 15 by Kaitlin Milligan and Mikhaela Fortuna, who earned the best postseason finish of their careers at the par-72 Club at Carlton Woods.

Screen continued her strong play on Tuesday, tallying the ninth round in the 60s of her season en route to a tie for fourth. It’s the junior’s fifth top-10 finish of 2020-21.

Milligan and Fortuna shared 12th at 3-under after sinking 12 birdies apiece. Milligan played her best tournament of the season en route to her best Big 12-finish of 12th, besting her previous high of T21. The senior carded a 73 on Tuesday to close her championship but tallied a counting score for the Sooners each day in Houston.

Fortuna also secured her best postseason finish, improving on her 2019 placement by 11 spots. The junior entered Monday in second place, but a 73 in the second round bumped her into 13th before she fired a 1-under 71 to conclude her week on Tuesday. The Manila product finished inside the top 15 twice and went 3-0 at Big 12 match play in a shortened season.

Maria Fernanda Martinez matched her career-low round set on Monday by firing a 2-under 70 in Tuesday’s final round to help guide Oklahoma to its strong finish. Libby Winans scored a 76 (+5) on Tuesday to finish her championship alone in 34th.

“Everyone played well this week, I mean everyone,” the 12th-year head coach added. “It’s definitely a confidence booster for all of us, and you can feel positive energy. Golf is such an individual sport, and you can feel the momentum, and that’s the biggest difference for us this week.”

The Sooners now await their fate, which the NCAA Selection Committee will announce on April 28. The team entered the week ranked 32nd in the Golfstat poll and is in line to appear in an NCAA Regional for the fourth straight season.