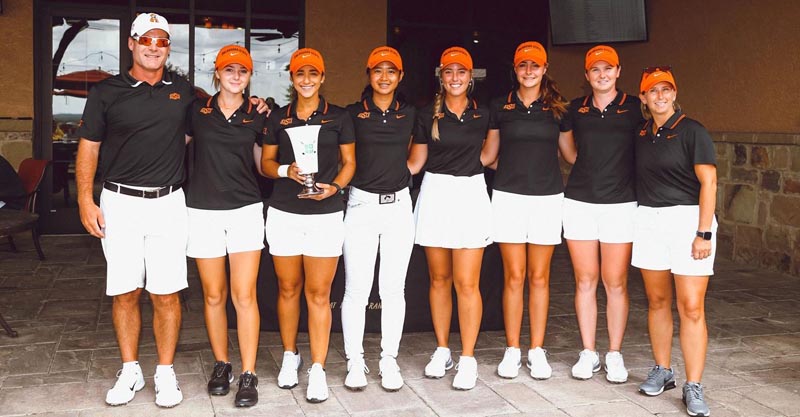 DENTON, TEXAS —- No. 3 Oklahoma State women’s golf dominated the field on its way to the lowest 54-hole total in school history on Tuesday at the Wildhorse Golf Club in the Sam Golden Invitational. OSU shot a 17-under 271 in the final round at the par-72, 6,288-yard course on its way to team tournament title No. 100 for the program.

The Cowgirls finished the tournament 36-under as a team, 13 strokes ahead of Texas Tech in second and 15 strokes better than TCU in third place.

“We’re very happy with the way they played this week,” head coach Greg Robertson said. “Especially shooting 17-under in the final round. It was a solid performance by everyone. This is a great way to start the year, and now we’ll be looking to build off of this as we move forward.”

Clemence Martin paced Cowgirls with a 6-under 66 in the final round of her first tournament with OSU. She finished the week at 4-under and tied for 20th in the 54-hole tournament. Caley McGinty shot a 2-under 70 to close the tournament with a third-place finish at 12-under.

Isabella Fierro rounded out the individual top-5 leaderboard after she shot a 1-under 71 on Tuesday to finish the week at 10-under.

Competing individually, Lianna Bailey finished tied for 37th after a 72 on the final day to finish the week at 1-over.

Oklahoma finished fifth with Mikhaela Fortuna leading the Sooners with a 9-under 207.

“We are disappointed with the results today but there are many positives to take from this week,” said Oklahoma women’s golf head coach Veronique Drouin-Luttrell. “We are a very good team and I’m excited to see where we go from here.

Fortuna, who entered the final 18 holes tied for sixth after shooting back-to-back rounds of 70-68 on Monday, closed the tournament with a 3-under 69 on the final day to finish tied for seventh. She finished the front nine even-par and tallied three birdies on the back nine, sinking back-to-back birdies on 16 and 17. Fortuna totaled 13 birdies through the two-day event and finished 5-under on par-4 holes.

Meagan Winans and Hannah Screen finished tied for 28th after the pair recorded a 1-under 215. Screen concluded the tournament with an even-par 72, while M. Winansfinished with a 1-over 73 through the final 18 in her first tournament in the Crimson and Cream. Screen finished the front nine 1-over and knocked in a birdie on 12 to finish even par on the day.

Maria Fernanda Martinez, who opened the tournament with a career-low 68, tied for 33rd with an even-par 216. Libby Winans rounded out the OU contingent with a 1-over 217 to finish tied for 37th.

Tulsa finished right behind OU in sixth place. Tulsa junior Lilly Thomas finished the 54 holes at 9-under par 207 to tie for seventh.

On Tuesday, Thomas turned in a 3-under par 69 in the final round. After bogeying her second hole, the par-4 6th hole, Thomas had four birdie putts coming on the par-5 eighth hole, par 4 15th and 16th holes and the par-3 fourth hole.

Lorena Tseng had her 22nd top-20 finish in 26 career tournaments with a 12th place performance. Tseng shot 1-under par 71 score on Tuesday to finish with a 7-under par 209. She had five birdies and two double bogey’s on the day.

Tulsa freshman Lovisa Gunnar finished in 43rd place with a score of 3-over par 219 after turning in an even-par 72 score today. Senior Haley Greb had a round of 76 for a three-round total of 6-over par 222 for 56th place.

Freshman Hanna Robinette turned in a spectacular round with a 1-under par 71, finishing 13 strokes better than her first collegiate round a day earlier. She birdied three of her first four holes on Tuesday and totaled six birdie putts for a 54-hole total of 236.

Tulsa will be back in action at the Schooner Fall Classic in Norman, Okla., Sept. 26-27.