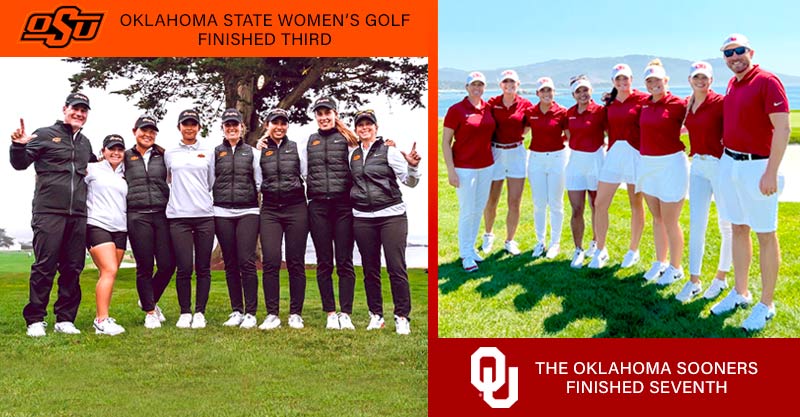 PEBBLE BEACH, Calif. —- Han-Hsuan Yu carded a magical hole-in-one on the iconic downhill seventh hole at Pebble Beach on Sunday as Oklahoma State women’s golf finished third at the Carmel Cup. She carded a final round score of 72, finishing in a tie for sixth at 1-under par for the opening tournament of the year.

“We saw a lot of good things this week that we can build on, especially having four players in the top-11,” head coach Greg Robertson said. “It was great to see them come back and finish strong today after a rough start.

“This experience at Pebble Beach over the last five days will be memories that all of our players will carry with them the rest of their lives. For Han-Hsuan Yu to make a hole-in-one on the seventh hole, you can’t ask for much better than that.”

The Carmel Cup was unique in its scoring format compared to most collegiate tournaments, having six players tee off for each team and counting the top five individual scores, rather than the common four counting scores format most events utilize.

Last year’s Big 12 Player of the Year, Maddison Hinson-Tolchard, made a clutch birdie on hole No. 18 to put her into a tie for sixth as she captured the eighth top 10-finish of her career.

Hinson-Tolchard and Yu were two of just eight players to finish the tournament under par at the distinguished Pebble Beach.

Hailey Jones finished strong on Sunday as she carded the second-best round of her career, posting a round of 3-under 69 to push herself into an 11th-place finish. The T11 result was her highest finish since the East Lake Cup last fall.

Freshman Thitaporn Saithip capped off the first tournament of her career with a final round 2-under 70, moving up from 15th place to finish 10th. She ended her Sunday round with 14 bogey-free holes, while also dropping in three birdies.

Four birdies on the day propelled Rina Tatematsu to a 4-over 76 as she finished the weekend in a tie for 43rd. Cecilie Leth-Nissen, another freshman making her collegiate debut, rounded out the lineup for the Cowgirls as she finished 45th in the field.

The Cowgirls will be back in action Sept. 24 in Norman for the Schooner Fall Classic at Belmar Golf Club. Oklahoma State ran away with the tournament title last season, winning by 20 strokes, to capture the program’s third victory at the event.

The Oklahoma Sooners finished seventh among the eight teams at 58-over for three rounds.

“The tournament has been an incredible experience for our players,” said Oklahoma women’s golf head coach Veronique Drouin-Luttrell. “We were blessed to play at Pebble Beach in a monumental tournament for women’s golf. We will use this week as a learning opportunity to help us grow and be a better version of ourselves moving forward.”

Nina Lang led the Sooners’ efforts through the tournament and tallied a 2-over 74 in her final 18 holes. Lang finished with a 9-over 225 and tied for 24th.

Mikhaela Fortuna tied for 29th and notched a 10-over 226. Fortuna opened the tournament with a team-low even par 72.

Maria Fernanda Martinez recorded her two best rounds of the tournament following her opening round 81. She fired a 1-over 73 in the second round and tied Lang with a team-low 2-over 74 through the final 18 holes.

Meagan Winans produced a 15-over 231 for the tournament and tied for 40th.