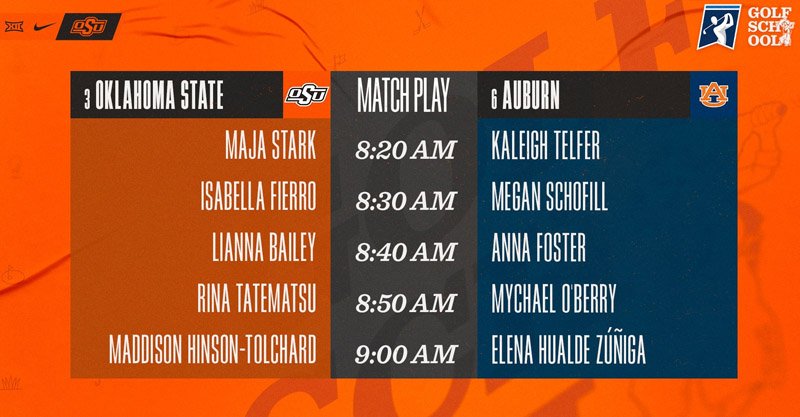 SCOTTSDALE, Ariz. – Maja Stark tapped in a birdie putt on No. 18 to cement the Oklahoma State women’s golf team as the No. 3 seed as the NCAA Championship format moves from stroke play to match play on Tuesday morning at Grayhawk Golf Club.

The Cowgirls advanced to match play for the first time since the format was introduced in 2014. OSU will take on No. 6 seed Auburn, the SEC champs, on Tuesday at 8:20 a.m. CT. GolfChannel will carry the action from 11 a.m. to 1:30 p.m. CT. Auburn is coached by former University of Tulsa All-American, coach and Oklahoma Golf Hall of Fame inductee Melissa Luellen.

Oklahoma State’s 1-over 289 on Monday is tied for the seventh best score ever by an OSU team at NCAAs, and the team’s 5-over 1,157 is the second-best 72-hole score in school history. The Cowgirls were second only to Duke in par-5 scoring at 4.83 on the week, and their 61 birdies ranked third in the field.

Stanford earned the No. 1 seed for match play, and Cardinal freshman Rachel Heck won medalist honors with an 8-under 280.

Stark and fellow Cowgirl Rina Tatematsu both birdied No. 18 to finish tied for 12th on the leaderboard at 1-over for the week. Their 72-hole score of 289 is the fifth best NCAA Championship performance by a Cowgirl.

Another freshman, Maddison Hinson-Tolchard, was only a stroke behind Stark and Tatematsu in a tie for 15th at 2-over 290. Hinson-Tolchard had a bogey-free 3-under back nine to vault up the leaderboard in the afternoon.

Lianna Bailey and Isabella Fierro finished in a tie for 51st and 70th, respectively.