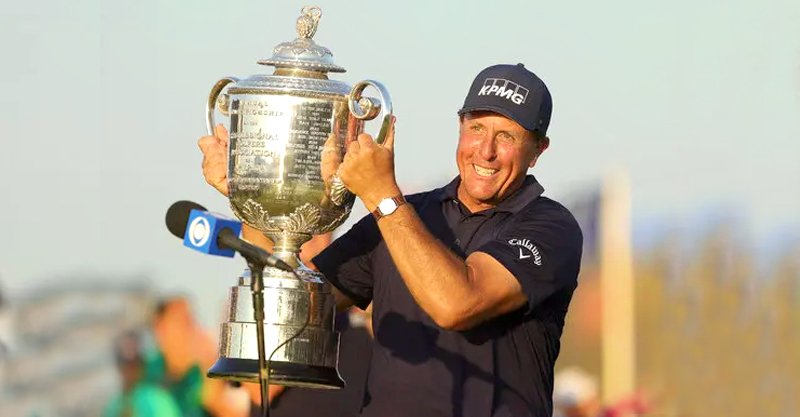 What did Phil Mickelson’s historic victory at age 50 in the 2021 PGA Championship Sunday mean for the 2022 version at Southern Hills Country Club?

It meant if you haven’t registered for tickets by the end of this week, you could be left out. And it means to watch Mickelson at Southern Hills, you are definitely going to have to wait for 2022.

As noted for months, one way to guarantee a spot for 2022 was by purchasing tickets for the 2021 KitchenAid Senior PGA Championship, which tees off Thursday at Southern Hills. Those tickets can still be purchased at www.srpga.com.

The other way to register for tickets is to go to the 2022 site. Tickets will be sold exclusively through an online registration process. By registering, you are holding your place in line – first come, first served – for the chance to purchase tickets when they are released in early June. To register for tickets, visit PGAChampionship.com/2022/tickets.

Pre registration was already at a brisk clip before Mickelson stared down Brooks Koepke and the rest of the field to win his second PGA Championship and sixth major championship Sunday at Kiawah Island. Since then it has been off the charts.

“They are flooding in from a lot of places, mostly regional, but also across the country,” said Bryan Karns, championship director for both events. “Normally we have a six to 10-month window of selling but we are almost to the number we want to get to in three weeks. We have so many people registered for priority tickets that there is a good chance if you don’t register in the next week you’re not going to get tickets.”

Had Mickelson suddenly decided that he wanted to come to Tulsa this week and try to become the only player probably ever to have an opportunity to win the PGA Championship and Senior PGA Championship in the same year, let alone the first to win major championships in consecutive weeks, it likely would have overwhelmed the Tulsa event, which has both limited tickets and virtually no onsite parking, both decisions made in planning months ago in conjunction with the Tulsa County Health Department, the City of Tulsa and others during the Covid-19 pandemic restrictions.

“It could have broken the website,” said Bryan Karns, championship director for both events. “At this point we’re set up to handle a certain size event. You don’t really want 45-minute lines for concessions, etc. It’s really past the time when exemptions were being given out.”

Tickets are limited to approximately 8,000 daily for the Senior PGA Championship, though it was obvious to anyone watching the PGA Championship that the announced restriction of 10,000 spectators daily was ignored and probably close to 30,000 were sold. That would not work for the Senior PGA Championship due to the parking situation, which is to encourage attendees to get dropped off at the turnaround at 65th Street and Lewis Avenue by ride share companies or find parking along Lewis Avenue and walk to the course.

The senior contestants were arriving steadily Monday, many for their first look at the 1936 Perry Maxwell design since the major restoration by architect Gil Hanse.  Southern Hills head professional Cary Cozby played an early morning practice round with Rocco Mediate. Jim Furyk, Bernhard Langer and others arrived and began to limber up on the range.

The course is fairly wet due to rains all last week and there is a better than 50 percent chance of rain for practice rounds Tuesday and Wednesday, with the chance of showers diminishing greatly once competition begins Thursday.

There is a pro-am Tuesday and a special First Tee of Tulsa clinic on Wednesday from 11 a.m. to 1 p.m. sponsored by Utility Tri-State Inc. The field of 156, including 21 club professionals (20 who qualified and Cozby, who was given a special exemption)

The KitchenAid Fairway Club, located in the Championship Courtyard to the right of the 12th fairway, will be open all week, giving spectators an opportunity to explore the KitchenAid brand while bringing out their inner maker. The KitchenAid Fairway Club will serve as the centerpiece of the fan experience at Southern Hills and will include live chef demonstrations and interactive activities throughout the week, including Chance Cozby, younger brother of Cary Cozby and currently a cooking sensation on TikTok.