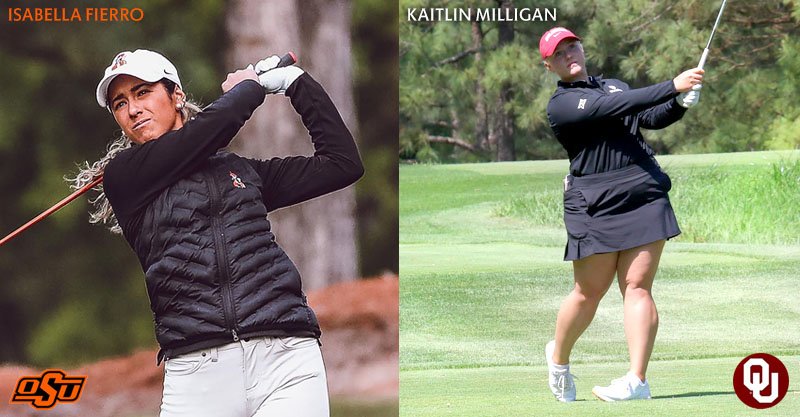 THE WOODLANDS, Texas – In a round for the ages, the Oklahoma State women’s golf team smashed the Big 12 Championship scoring record by eight strokes and is now 16 shots up on the field with 18 holes to play at The Club at Carlton Woods.

Anchored by four rounds in the 60s and a record-setting performance from Isabella Fierro, OSU carded an 18-under 270, which topped the previous Big 12 Championship record of 278 set by Oklahoma in 2014. OSU’s 36-hole score of 549 is the lowest in the event’s history by 24 strokes.

The University of Oklahoma shot 10-under and moved from fourth into a tie for second with Baylor. The battle in Tuesday’s final round may well be for second with the Cowgirls off in the distance in first place.

Fierro carded a 7-under 65, which broke the Big 12 Championship scoring record and has the sophomore tied atop the leaderboard at 9-under 135 with 18 holes to go. Her 65 tied for the third lowest round ever by a Cowgirl golfer.

Not to be outdone, Lianna Bailey shot a bogey-free 5-under 67 on Monday, which tied for the fourth lowest round in Big 12 Championship history. The junior is in fourth place at 7-under 137, one stroke better than Cowgirl sophomore Maja Stark after back-to-back rounds of 3-under 69 for the sophomore.

Freshman Rina Tatematsu also found the 60s on Monday and found herself tied for sixth place after 36 holes. Tatematsu shot a 70 on Sunday and a 69 on Monday and is at 5-under 139 for the tournament.

Han-Hsuan Yu rounded out the field for OSU after a second-round 78 pushed her into a tie for 36th place.

Heading into Tuesday’s final round, Oklahoma State owns 23 conference championships, including nine Big 12 titles – three more than any other league foe. The final round will begin at 10 a.m. for Oklahoma State, and live scoring can be found at GolfStat.com.

Oklahoma’s 10-under 278 in the second round ties a program record for the lowest round at the conference championship.

Four Sooners were below par on Monday behind a 17 birdies on the day, including a combined 11 from Kaitlin Milligan, who returned to form, and Hannah Screen, who became the school’s record holder for scoring average on Monday.

“Today was a lot of fun for us as a team,” head coach Veronique Drouin-Luttrell said. “I think that we started a little bit stressed out over the first few holes, but we righted the ship early on and played an excellent round of golf. I’m proud of everyone for fighting and pushing forward to make things happen.”

“At the end of the day, you’ve got to worry about yourself and really just play your own game. We can’t control what anyone else is going to do; we can only handle our business,” the 12th-year head coach added. “We’re counting four scores, and so is everyone else. The message is to play your game and add everything up at the end and see what happens. We’re a fantastic team, and we’re going to have a chance tomorrow.”

Milligan was one of many stars on the day, finally breaking through and firing a 4-under 68 after shooting a 72 on Sunday. For the Oklahoma senior who has battled obstacles over the last year of her career, it’s her first round in the 60s on the season and 19th of her career.

“The conditions today were great for getting a low score,” Milligan said. “Ever since I had surgery, I haven’t shot a round under par. I was 2-under for a while yesterday, and I got pretty close to finishing under, and that really motivated me going into today . . . it was going to be under par one way or another. It’s been a tough stretch and comeback for me, so I’m really pleased with how today went and feel confident going into tomorrow.”

The Norman native opened with a bogey on the opening hole before rattling off three birdies over the next seven holes. She entered the back nine at 1-under for the round but caught fire for the Sooners with a bogey-free 3-under 33 on the back and move into a tie for eighth.

Hannah Screen shot 69 to move into a tie for sixth, four shots off the lead. The Briton is the only player for the Crimson and Cream to open with two rounds below par after carding a 70 on Sunday. Mikhaela Fortuna entered Monday’s round in a tie for second and sits alone in 13th at 2-under after carding a 73.  Sophomore Maria Fernanda Martinez managed a career-low of 70 to jump up 19 spots into a tie for 22nd. The Veracruz, Mexico, product opened her day with three birdies over her first five holes before evening out and finishing at 2-under.

Libby Winans shot 71 to share 22nd with Martinez. Her under-par round is the sixth of her season and 22nd of her career, as she remains the school’s second-lowest scorer all-time.

The Sooners will tee off on Wednesday with their sights set on hoisting their seventh conference championship trophy and third of the Drouin-Luttrell era. Oklahoma will hit the first tee box in the final groups at 10 a.m. with Oklahoma State (-27, 1st) and Baylor (-11, T2).