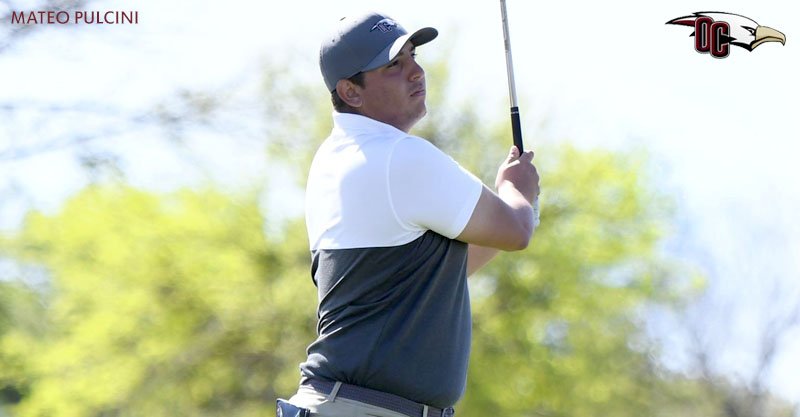 Photo: Mateo Pulcini led OC with a 3-under 69 in the first round of the LSC Championship tournament.

ARLINGTON, Texas (April 19, 2021) – No. 15-ranked Oklahoma Christian sizzled on the par-5 holes at Tierra Verde Golf Club on Monday and thus took control of the Lone Star Conference Championship from the start.

Fueled by a 12-under-par effort on those four par-5s, the Eagles posted a team score of 281 (7-under-par) to take a five-shot lead over Midwestern State (Texas) on the tournament’s opening day. The LSC champion will earn an automatic bid to the NCAA Division II South Central-West Super Regional tournament.

As the only ranked team in the LSC and the No. 1 team in the NCAA’s South Central Region ranking, OC entered the LSC tournament with a proverbial target on its back, but the Eagles didn’t seem too bothered. The Eagles’ quintet of Trevor Norby, Andres Brictson, Mateo Pulcini, Alex Motes and Alejandro Armijo combined for 19 birdies – tied for the lead among the tournament’s 13 teams – and added an eagle (by Pulcini) to help offset the team’s lone double bogey.

OC and Midwestern State weren’t the only teams that went low on Monday. Cameron was third at 287 (1-under), one shot ahead of Lubbock Christian (Texas) and two ahead of Texas A&M-Commerce.

Pulcini, the LSC freshman of the year from Rio Cuarto, Argentina, was tied for third in the 65-man field with a 3-under-par 69 that included that eagle, on the par-5 No. 13. Pulcini trailed the individual leader, Jake Doggett of Midwestern State, by four shots, and Tyler Kaman of Cameron by one shot.

Norby, a senior from Carlsbad, Calif., who’s a two-time All-American, shot a 70 and was tied for seventh. He was 3-under-par on at the turn before a wild back nine on the 6,975-yard course that included three more birdies along with four bogeys.

Also at 70 was OC junior Andres Brictson of Merida, Mexico, whose round included four birdies. At 72, tied for 13th, was junior Alex Motes of Sulphur Springs, Texas, who was 3-over through 12 holes but closed strong, with three birdies over his final six holes.

OC’s No. 5 player on Monday, sophomore Alejandro Armijo of Rio Rancho, N.M., had three birdies en route to a 73 and was tied for 21st.

The Eagles will be grouped with Midwestern State and Cameron during Tuesday’s second round and will tee off starting at 11:40 a.m. OC is seeking what would be the third conference title in the program’s history.