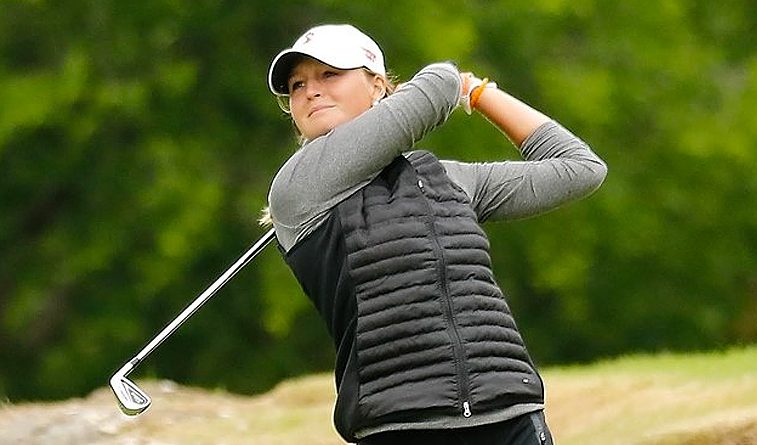 DALLAS – The No. 16 Oklahoma State women’s golf team is just two strokes off the lead with 18 holes to play at the Big 12 Championships, while No. 19 Oklahoma is another four shots back in fourth place.

The Cowgirls sit in third place behind Texas by two strokes and Baylor by one after a 36-hole day at the Dallas Athletic Club.

In anticipation of inclement weather on Saturday, the final 18 holes will be played at 8 a.m. on Sunday.

Leading the charge for the Cowgirls are senior Kenzie Neisen and junior Chih-Min Chen. Neisen and Chen both scored 1-over par 145 through two rounds and are both tied for third place.

Behind the duo of Neisen and Chen was senior Emma Broze, who shot 2-over par and sits tied for seventh place.

Senior Alexis Sadeghy carded 9-over par after two rounds and will go into the last round tied for 25th place, while freshman Stephanie Astrup is tied for 43rd place and shot 21-over par.

The Cowgirls knocked in a combined 32 birdies as a team. Chen and Sadeghy both contributed eight birdies, Broze and Neisen pitched in seven birdies and Astrup put down two birdies.

The tournament’s second round was originally scheduled for Saturday, but was moved to Friday afternoon in response to the weather forecast and expected rain. The final round of the 54-hole championship will begin Sunday at 9 a.m. CT.

“We are definitely still right in the hunt and in team golf anything can happen,” said OU head coach Veronique Drouin-Luttrell. “We will make it a priority in the final round to not force shots and play what the course gives us. If we can commit to that strategy and trust the process we will have a chance.”

All five Sooners are in the top 25 of the individual standings, led by junior Julienne Soo and senior Hannah Wood, who are tied for ninth place with score of 148 (+4).

The Sooners tee off for the final round on Sunday on hole No. 1 and will be paired with golfers from Texas Tech and Iowa State. Live scoring will be available on Golfstat.com.