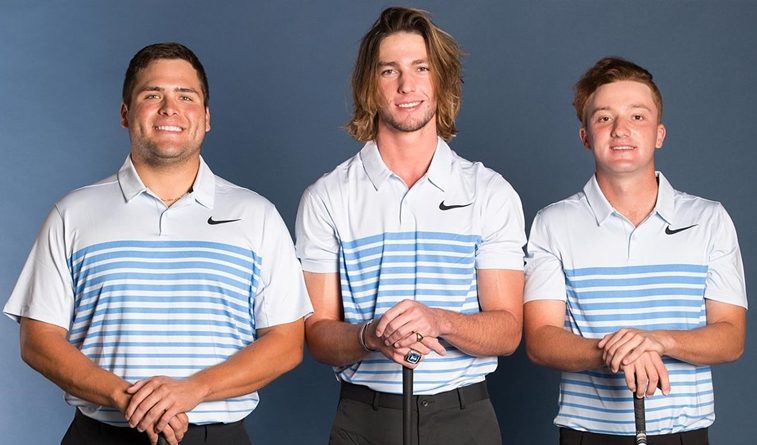 The tournaments gets under way 9 a.m. Monday with the final round starting 8:30 a.m. Tuesday on the par-72, 7,035-yard course. The Stars, ranked No. 1 in the NAIA, headlines a field including three top 10-ranked squads.

The Stars took the SAC crown for the seventh time in eight years and 22nd time by 16 shots over Wayland Baptist on April 24-25, 2017 at Gaillardia Country Club. OCU’s Rupert Kaminski seized his second consecutive individual conference championship and the 2017 SAC player of the year honor.

Kaminski, a junior from Johannesburg, South Africa, paces Oklahoma City with a 70.84 stroke average, two victories, 96 birdies and six eagles. Kaminski scored eagles on the par-4, 354-yard seventh hole at The Farm Golf Club during each round April 9 in the Dalton State Roadrunner Classic. He completed the hole in two strokes each time, nailing eagles using his pitching wedge. OCU collected third place in the tournament. The Stars have five wins and three runner-up finishes this season.

The Stars’ David Meyers, a sophomore from Johannesburg, South Africa, has produced 71.80 shots per round, two wins, 84 birdies and two eagles this season. Meyers became NAIA golfer of the week after winning the Battle at the Primm on March 19-20 in Primm, Nev., while matching Kaminski’s 54-hole tournament record for OCU. Garrison Mendoza, a senior from Clinton, Okla., sets out to gain his second all-conference nod. Mendoza has turned in a 73.16 scoring average in 2017-18.

Gaillardia Country Club hosts the SAC Championships for the second consecutive year. Award-winning course architect Arthur Hills designed Gaillardia’s golf course. His natural approach, along with his reputation for being environmentally friendly and his unwavering commitment to excellence, all contributed to his selection for Gaillardia. The golf course opened in July 1998. In the mid-1990s, Edward L. Gaylord chose a parcel of his family’s farm land to transform into a grand, Old World style clubhouse, golf course and community. The course hosted the 2001 and ’02 Senior Tour Championships.

Temperatures are expected to reach the 60s and 70s on Monday and Tuesday. Winds could run between 10-15 mph with a 10 percent chance of rain. Friday’s round will start with an 8 a.m. tee time. Follow the tournament via live scoring.

In the 2017 league tournament, OCU won its 15th SAC title by 15 strokes over Texas Wesleyan at Gaillardia Country Club in Oklahoma City. Melissa Eldredge of the Stars aims to repeat as an all-SAC performer. Three-time SAC player of the year Alex Schies of Texas Wesleyan won the individual championship last year.

In its last time out, OCU took its second title of the season in the O-City Spring Classic on April 9-10 at Lincoln Park. The Stars prevailed by nine shots over Texas Wesleyan. Schies collected the individual title by two strokes over the Stars’ Savannah Moody.

Eldredge, a sophomore from Eufaula, Okla., tops OCU with a 76.75 scoring average, 51 birdies and two eagles this season. Moody, a senior from Aledo, Texas, posts a 76.92 stroke average with 45 birdies. Moody captured her first tournament crown in the Ottawa-Arizona Invitational, leading the Stars to the team title Jan. 29-30 in Litchfield Park, Ariz. Schies leads the NAIA with 73.90 shots per 18 holes.

The forecast includes high temperatures in the 50s and 60s during the tournament. A high chance of rain exists Friday night into Saturday.