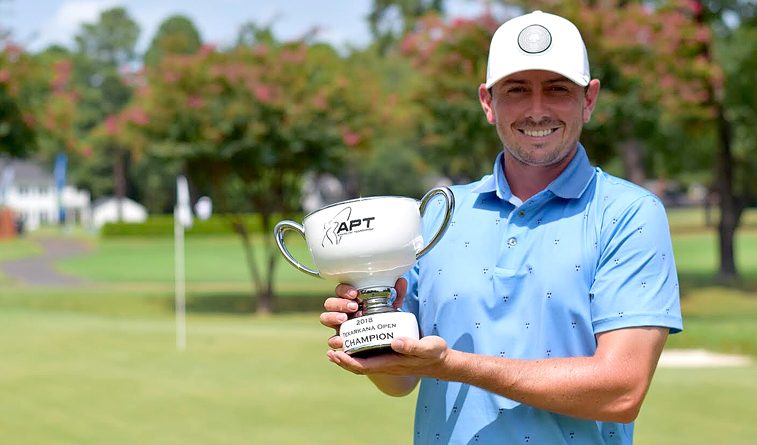 Texarkana, Arkansas- Blissfully unaware of his position after refusing to check the leaderboard at the Texarkana Open due to a double bogey at the 10th, Josh Creel sat three strokes back on the 16th tee box. He finished birdie-eagle-par, and unbeknownst to him, it proved to be enough for the victory, overcoming Trent Whitekiller of Sallisaw and Texarkana native Zack Fischer for his third consecutive win on APT.

“I didn’t think 14 stood a chance,” Creel said.  It was a reasonable belief, as it took a rollercoaster of events for him to have a chance.

Whitekiller began the day in a tie for the lead with Fischer at (-13), and was able to expand his lead with a birdie train from the 5th through 7th holes. His birdie at the 6th was one of 14 there the entire tournament, the lowest number of birdies on any given hole. At the end of his run, Whitekiller sat three strokes ahead of the field, with Fischer in second. He missed a 6 footer for birdie, and the ninth hole would be his undoing.

The 2017 Brownwood champion found the fringe on the undulated ninth green, and his putter betrayed him. Taking four shots to get into the cup, Whitekiller gave his lead back in one painful sweep, as Fischer birdied the eighth and parred the ninth. Both players sat at -14) headed into the back nine. Whitekiller would post a bogey and another double before rallying with a birdie at the 15th, falling away from Fischer.

Winner of his last two starts, Creel posted 2-under on his front nine to sit one behind the leaders on the 10th fairway. After posting a double on the dogleg left par 4, one of three on the tournament there, he stopped checking the score. Three back with eight holes to go, Creel wouldn’t make up the difference until the final three holes.

He took advantage of the reachable par 5 16th with a birdie, and stepped up to the 17th tee. The 291 yard par 4 proved drivable for the field over the course of the week. With a pin parked upper left side of the green, Creel went for a draw into the flag, and over cooked it. Sitting left of the flag, he grabbed his 54 degree wedge and pitched in for eagle.

On 18, Creel found the fairway right, and put it to 15 feet. He missed the putt, but casually tapped it in. After shaking his competitor’s hands and asking about the lead, his face turned from jovial to locked back in. He was tied for the lead.

On the final hole, Fischer missed the fairway to the right for the third consecutive hole, and Whitekiller was in the middle of the fairway. The former leader put it to the fringe just right of the flag, sitting 15 feet from the cup but having to putt over a hill to tie Creel. Fischer hit his second over the green leading to a bogey. Whitekiller was the last bid to force a playoff but rolled it well past.

Creel looks for an unprecedented fourth consecutive victory on APT in Lufkin Texas, with the tour heading to Crown Colony Country Club for the Southside Bank Open.  He has not yet lost with his current putter in hand. A guaranteed $20,000 first place check is on the line for the field, beginning on Tuesday.