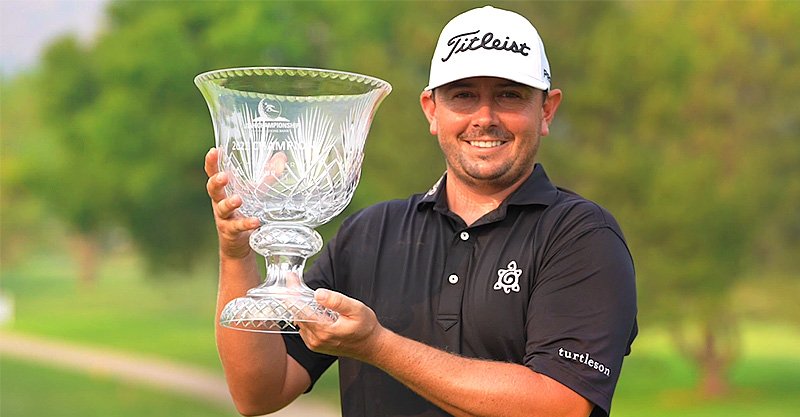 Edmond resident Josh Creel moved up to 18th place in the Korn Ferry Tour Finals after his tie for 10th Sunday in the Nationwide Children’s Hospital Championship in Columbus.

Creel, who finished at 13-under, must stay within the top 25 to earn his 2022 PGA Tour card through the three-event Korn Ferry Tour Fiinals which concludes this week with the Korn Ferry Tour Championship at Victoria National Golf Club in Newburgh, Ind.

A solid showing there and Creel will join Taylor Moore and Max McGreevy as Oklahomans to earn promotions to the PGA Tour for its 2021-22 season. Moore, who also tied for 10th Sunday, and McGreevy earned two of the 25 cards available to the top 25 finishers during the regular season. They are not listed on the KFT Finals standings which will award 25 additional cards.

Former Oklahoma State golfer and Tulsa resident Bo Van Pelt is in 32nd after two events and will need a strong showing this week to move into the top 25 and reclaim his card. Rhein Gibson of Edmond is 48th after two events, while former Tulsan Tag Ridings is 68th and former Sooner Charlie Saxon of Tulsa is 76th. All could move into the top 25 but will need to be in contention this week.

Former Cowboy Peter Uihlein is in 16th place and in solid position to regain his PGA Tour status.

First Tee of Tulsa Executive Director Janice Gibson competed in the Senior LPGA Championship in French Lick, Ind. Gibson did not make the cut after shooting rounds of 77-85 on the difficult Pete Dye course.

The lone Oklahoma entrant in the U.S. Senior Amateur field did not make the cut into match play Sunday. Blake Gibson of Yukon shot rounds of 76-80 to miss the cut to 64 for match play by eight shots. Also missing the cut was former Oral Roberts golfer Bryan Norton of Shawnee, Kan., who was 10 over for the two rounds.