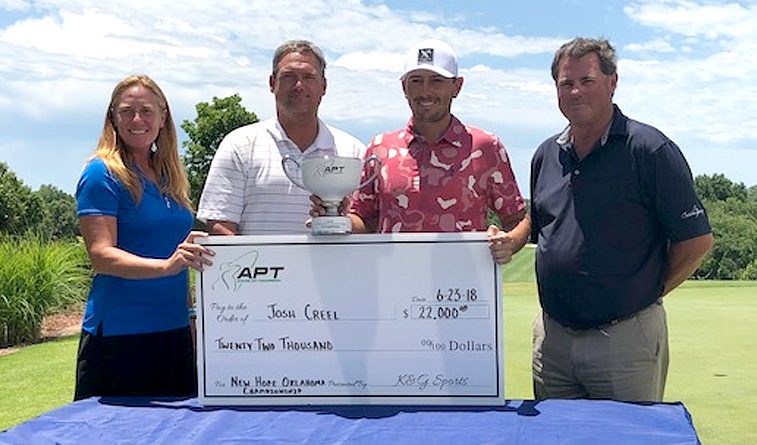 After a three-round birdie binge, Josh Creel’s fate in the New Hope Oklahoma Championship on the Adams Professional Tour boiled down to a couple of knee-knocking par saves.

The first, an 8-foot slider with 2 feet of break, came on the par-3 16th at The Golf Club at Indian Springs and preserved his two-shot lead over Australian Nick Flanagan, former PGA Tour player and four-time winner on the Web.com Tour.

Flanagan made an unlikely birdie on the par-5 17th , recovering from a drive than landed way right in a greenside bunker on the 15th hole. Now up by a single shot, Creel, the former University of Central Oklahoma star who now plays out of Oak Tree National in Edmond, hit his drive on the short par-4 18th into a fairway bunker, splashed out to about 50 feet away and rolled his first putt 6 feet past the hole.

After Flanagan’s birdie effort from 25 feet stopped two inches short dead center, Creel steadied himself and knocked in the par putt for a one-shot victory and a $22,000 winner’s check.

“The par putt on 16 was huge,” Creel said. “It snapped to the left but went in the center. The par putt on 18 wasn’t long, but given the circumstances that made it a little longer.”

After shooting 22 under with 23 birdies against one bogey in the first 54 holes, Creel got off to a solid 3-under start with four birdies in his first five holes Saturday. He bogeyed the ninth hole, then endured a three-shot swing on 12 when Creel hit his drive right into tall rough then plunked his second into a pond fronting the green. His double bogey, coupled with a birdie from Flanagan, cut a four-shot advantage to one and upped the tension level considerably.

Flanagan missed a short par putt on the par-4 14th to double his deficit, but kept the pressure on down the stretch, particularly with his birdie from nowhere on 17. He shot a final-round 66 to Creel’s 1-under 71. Former University of Kansas golfer Chase Hanna of Leawood, Kan., fired a final-round 65 to take third place at 21 under, two behind Creel and one back of Flanagan.

Creel, 28, a native of Cheyenne, Wyoming, has won three previous APT tournaments and now has top-20 finishes in five consecutive events this season.

Watching Flanagan’s birdie effort on 18 stop inches short was a helpless feeling. Taking care of his own business was all Creel could do and after a tournament in which he made 28 birdies, he was most proud of those two gutty par saves.

“The second putt didn’t do a whole lot, but given the circumstances it wasn’t easy,” said Creel, who said it ranked as the most pressure packed putt of his career, given that his previous wins did not come down to the wire.

“To win wire-to-wire here in my home state is a great feeling,” he said. “Hopefully I can build on this positive momentum going forward.”

The APT Tour, which had an event at Muskogee Country Club in May, takes a three-week break, but many of its participants will be looking for state opens or Web.com Tour qualifiers.

Trent Whitekiller of Sallisaw shot a final-round 67 and finished in sixth place at 19 under. Dillon Rust of Edmond tied for 20th at 13 under. Chris Tidland of Stillwater tied for 28th at 12 under along with Matt Mabrey of Tulsa. Cameron Meyers of Edmond tied for 32nd at 11 under. Enid native Chris Worrell tied for 39th at 9 under.