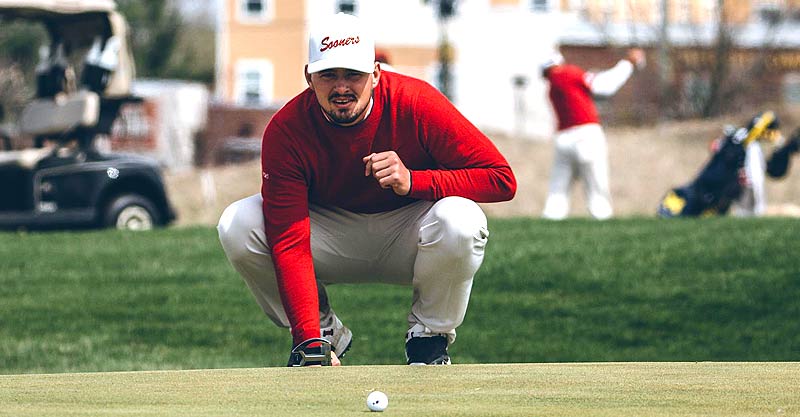 Editor’s note: For a great in-depth conversation with Quade Cummins, click here for the 73rd Hole Podcast with Quade as the special guest discussing his upbringing, relationship with Walker Cup teammate Austin Eckroat, love for his home boys and outlook for the PGA Tour.

For those who like their rivalries served with a side of rancor, Quade Cummins and Austin Eckroat lifting their Oklahoma bonds well above any Bedlam squabbles may not sit well.

Now if the two All-Americans happen to meet in match play with the NCAA Championship on the line, it will be game on and that would be exquisite. But they’ll be back practicing together at Oak Tree National within a week, just as they did nearly every day in the pandemic summer of 2020.

That Cummins, the sixth-year senior at Oklahoma from Weatherford, and Eckroat, the fourth-year senior at OSU via Edmond, are now “boys,” as Cummins likes to put it, as well as teammates in the upcoming Walker Cup, is one of the remarkable stories in golf. It illustrates not only the journey both have made, but also the ever-growing and outsized influence Oklahoma junior golf is having on the national stage.

“I think what the state, the coaches, the OGA and the OJGT have done is produce a nice lineage of competition for the past two decades,” said Ryan Rody, the director of instruction at Southern Hills Country Club who works with both players. “Every year someone is raising the bar and that’s what’s really cool. These two making the Walker Cup team is going to raise it even more.”

Cummins grew up playing at the Prairie West Golf Club in Weatherford, often with his grandfather, and pretty much had free reign to play as many balls in as many directions as he felt necessary. In both high school and Oklahoma Junior Golf Tour events, he impressed OU coach Ryan Hybl with his strength and raw talent and with his obvious love for the game.

“I’m not going to say I looked at him and envisioned a future Walker Cup player,” Hybl said. “But I saw a big body with a lot of raw talent that knew how to win and was irritated when he didn’t win. “

Cummins, for his part, was so impressed with his visit to Norman that he canceled a trip to Stillwater. The call to former OSU coach Mike McGraw was one of the hardest he’s ever had to make, but he had found his home.

As he got comfortable with his OU teammates, Cummins soaked in their advice and advanced his work ethic. His technique flourished under the tutelage of Ryan Rody, then the director of instruction at Gaillardia and now at Southern Hills. He shared a trait Hybl said all his best players have possessed.

“My best guys have always been the ones who love to play the most amount of golf and he’s at the top of the list,” Hybl said. “He would play golf every day. And that will help him in his professional career, because when you’re playing three or four weeks in a row, it’s a job and not the easiest thing to want to play or practice.”

Cummins has 17 top-10 finishes in his collegiate career and has taken second three times. He has performed admirably in summer amateur events as well, winning the Pacific Coast Amateur in 2019 and the OGA State Amateur in 2016. He is ranked ninth in the PGA Tour University rankings and Eckroat is third.

After Cummins and Eckroat had confirmed that both had made the team, there were high fives at the airport as the squads returned from a tournament in Tallahassee. The two first played together at the Oklahoma Golf Association Junior Championship at Kickingbird when Eckroat was only 12 and Cummins 15. Now it is nothing for them to play six practice rounds together in a week during the off season at Oak Tree National.

“Deep down there is a competitive spirit among OSU and OU, but I know they love each other and both want each other to do great things, and they push each other,” Hybl said. “Now if they do get a chance to go head-to-head, you’ll see some fireworks, but on the back end they’re still going to be playing together the next week.”

Both Cummins and Eckroat are hoping to be paired together in at least one match at the Walker Cup, scheduled May 8-9 at historic Seminole Golf Club in Juno Beach, Fla.

“We have always been decently close, but when I joined out there at Oak Tree we started playing almost every day,” Cummins said. “Now I would call him one of my better friends, if not my best friend. We will both be out at Oak Tree when we start our pro careers.”

Hybl said playing in the Walker Cup is one of the ultimate goals for all amateurs. An excellent amateur himself before trying the professional ranks, Hybl came close to making the team in 2001. Cummins joins former Sooners Charlie Coe, Anthony Kim and Hunter Haas as OU players to represent the United States against Great Britain and Ireland.

“This is the Ryder Cup and the Olympic team for college players,” Hybl said. “This is as good as it gets in amateur golf. The status that Quade is moving into with those guys is special.”

Rody has worked with Cummins since early 2017 and Eckroat since 2015. He said both are tremendous feel players with solid swing structure. He also admitted that for an instructor, having the rare feat of having two current students make the Walker Cup team together is extremely gratifying.

“I don’t know if it’s been done before, but it has to be very rare,” he said. “As a teacher you should be judged by how your players are doing and so this is certainly one of my greatest achievements. It’s just really cool that I was able to help them a little bit.”