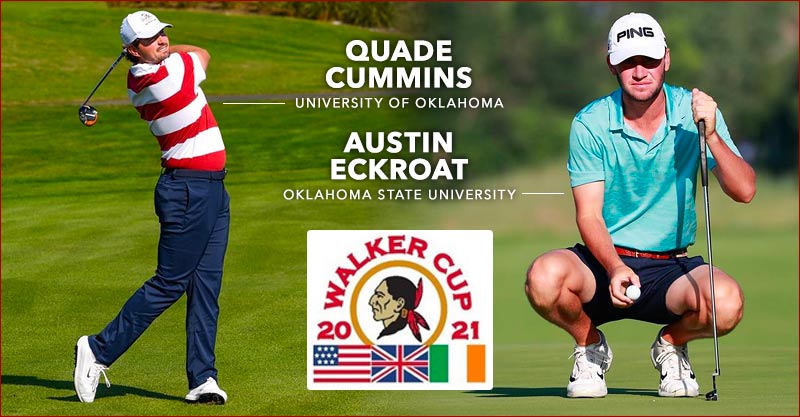 Friendly rivals and Oak Tree National members Quade Cummins of the University of Oklahoma and Austin Eckroat of Oklahoma State have both been named to the U.S. team for the 2021 Walker Cup match.

With just more than two months until the 2021 Walker Cup match at Seminole Golf Club in Juno Beach, Florida, the U.S. team has taken shape. On Monday, the U.S. Golf Association announced the full 10-man squad that will compete in the first Walker Cup to be held in the spring on U.S. soil.

Davis Thompson, Ricky Castillo and John Pak, as the three highest-ranked Americans in the WAGR, earned their spot on the team after the World Amateur Golf Ranking was updated on Feb.10 to reflect results from the previous weekend’s Jones Cup, a prestigious amateur event at Ocean Forest Golf Club in Sea Island, Georgia. The trio joined reigning U.S. Amateur champion Tyler Strafaci as the first selections to the team.

“I’m honored to be chosen to represent my country at the Walker Cup this spring,” Cummins said after his selection. “Just getting the opportunity to play at one of the top amateur events is exciting, and I can’t wait to get going. Coach Hybl and I talk about leaving a legacy at OU, and this is definitely something that can help build that.”

The match was first played in 1922 at the National Golf Links of America and has been dominated by the Americans, who own a 37-9-1 all-time lead. The U.S. team is captained by Nathaniel Crosby of Jupiter, Fla., who led the Americans to a Walker Cup Match title in 2019.

Cummins’ selection is the first for a Sooner since Anthony Kim in 2005 and just fourth in program history following Kim, Hunter Haas and Charlie Coe, who won seven times at the Walker Cup, including twice as the team captain.

The Weatherford, Okla., product was one of six American players selected by the working group after tallying 24 top-20 and 17 top-10 finishes as a Sooner. Three of the remaining members were chosen based on WAGR rankings. The 2020 U.S. Amateur Champion, Tyler Strafaci, was also awarded a spot after his win.

Last summer, Cummins finished third in the Southern Amateur with a 72-hole score of 283 (-5) and tied for fourth in the Sunnehanna Amateur the following week. In December, he made the 36-hole cut in the PGA Tour’s Mayakoba Golf Classic.

Cummins, a two-time All-American, is currently 10th in the latest Golfweek player rankings and 18th in WAGR, in addition to a claim on the No. 7 spot in the most recent PGA Tour University poll. He helped lead the Sooners to the 2017 NCAA National Championship.

“We’re so happy for Quade. It’s such a special moment for him and for us to be part of it is really a treat,” head coach Ryan Hybl said. “When he decided to come back to Oklahoma for another year, one of his goals wasn’t just to try and help our golf team win a national championship but also to solidify his amateur career and get a spot on the Walker Cup team. He’s been able to make his mark in both amateur golf, and our golf program here at Oklahoma and I couldn’t be prouder.”

As a Sooner, he owns three of the top-15 scoring averages versus par in Oklahoma history and set the school record for the lowest 54-hole score when he fired a 193 (-20) at the 2019 Ka’anapali Classic in Hawaii. On the national stage, he has represented the United States twice as a member of the Arnold Palmer Cup team in 2019 and 2020.

Eckroat is the leader of the 12th-ranked Cowboys and has been an All-American each of his three years in Stillwater. He earned honorable mention status as a freshman, third team as a sophomore and second team as a junior. He currently ranks third on the PGA Tour University rankings and is line to earn Korn Ferry Tour status for the summer of 2021 following the NCAA Championships.

A native of Edmond, Okla., Eckroat has constructed an impressive amateur resumé. On four occasions, he has been in the field at the U.S. Amateur Championship and reached the quarterfinals of the 2017 U.S. Junior Amateur Championship before eventually falling to former Cowboy teammate Matthew Wolff.

This season, Eckroat has a runner-up showing at the Maridoe Collegiate Invitational. Overall, he has a pair of collegiate victories to his credit, winning the 2018 Wyoming Desert Intercollegiate and the 2019 Cabo Collegiate.

Eckroat competed at the 2019 U.S. Open at Pebble Beach. This past December, he tied for 12th place at the PGA Tour’s Mayakoba Golf Classic, which was won by OSU teammate Viktor Hovland, after posting a 14-under total of 270.

Eckroat becomes the 26th Walker Cup selection for the program, dating back to Labron Harris, Jr. in 1963.

Due to health and safety guidelines, attendance at the Match will be limited. The USGA will post information on the availability of public tickets in the spring on walkercup.org.