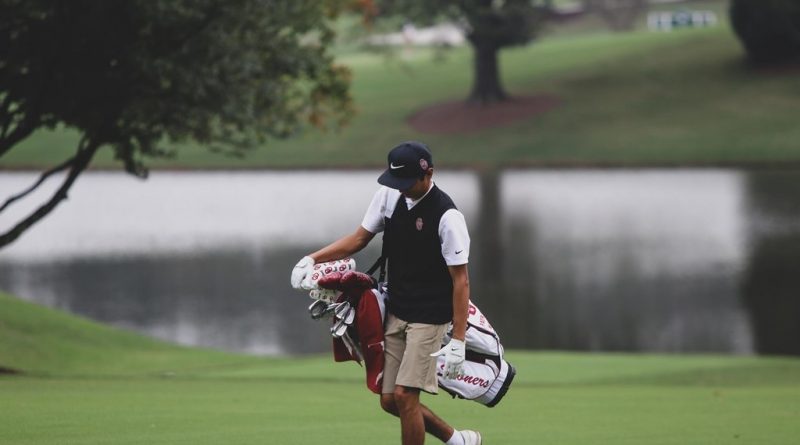 SAN ANTONIO – Powered by clubhouse leader Patrick Welch, the top-ranked Oklahoma men’s golf team was the lone team under-par in the Cabo Collegiate’s opening round and are in alone in first place after 18 holes of play at the 54-hole event in San Antonio. Oklahoma State is in fifth place after opening with an 11-over total of 299.

The Sooners (287, -1) collected 13 birdies and a field-high 57 pars on Monday to take a 10-stroke lead into the second round of the tournament that features nine top-25 teams, including the nation’s top-three teams.

“We battled some really tough conditions today on a really tough course and came out as the only team under-par, and that’s something to be proud of,” head coach Ryan Hybl. “I’m proud of our guys for battling today and putting together an excellent round of golf, but the work is nowhere close to done. We’ll get back out there tomorrow and expect to have to push ourselves.”

Coming off a fourth-place finish at the Seminole Intercollegiate, Welch carded a 3-under 69 on Monday at the par-72, 7,034-yard TPC San Antonio Oaks Course to take a two-stroke lead over a trio of golfers in second place after Monday’s opening round.

After bogeying his third hole of the day, the junior sunk four birdies and 11 pars to take and hold the lead.

“Patrick is just playing outstanding golf right now,” Hybl said. “He made some changes over the winter break on his putting, and when you pair that with his ability to strike the ball, he obviously is a really good player.”

Welch isn’t the only Sooner in contention for medalist honors after the opening round, as three more of Oklahoma’s golfers sit inside the top 15, including a pair tied for fifth.

Junior Logan McAllister tallied a birdie to open the day on the 10th hole and a bogey on 15 before sinking pars on his final 12 holes to card an even-par 72, good for a share of fifth.

Tied with McAllister for fifth is Jonathan Brightwell (72, E), who returned to the Oklahoma lineup after playing in the Seminole Intercollegiate as an individual. Brightwell accumulated four birdies on the day, second-most in the field, but a pair of late bogeys moved him from first to fifth.

All-American Garett Reband shot a 74 (+2) to open his week and is tied for 14th entering day two. His up-and-down round was highlight by an eagle on the par-4 17th to get him under-par on his front nine.

Quade Cummins, who was named to the United States’ Walker Cup Team on Monday morning, closed his day with a birdie to finish his round in a tie for 49th at 6-over.

The Sooners seek their 19th top-five finish in their last 20 events and sixth consecutive top-five of the 2020-21 season.

Oklahoma State’s 11-over total put them one shot out of third place held by Florida State and Texas at the par-72, 7,034-yard layout.

Fresh off a top-10 showing at the Seminole Intercollegiate, Bo Jin led the Cowboy starting five. The freshman posted a 2-over 74 to stand in a tie for 14th place. Jin bounced back nicely on his inward nine after an opening side of 4-over 40, which included a triple bogey. He moved to 5-over for the day with a bogey at the 10th before carding his first birdie of the round at the 12th. He would go on to birdie three in a row at Nos. 14-16 to come in at 2-under 34.

Junior Austin Eckroat, who was named to the U.S. Walker Cup squad earlier in the day, posted an opening 75 to stand in a tie for 21stplace.

Among those tied for 21st were freshman Brian Stark and sophomore Aman Gupta.

Sophomore Eugenio Chacarra carded a 76 during his first round to stand in a tie for 33rd.

Freshman Hazen Newman is competing individually at the event and posted an opening 80 to tie for 69th place.

The Cowboys will begin their second round tomorrow at 8 a.m. and will be grouped with Baylor, Arizona State and Arkansas. Live scoring for the event is available at golfstat.com.