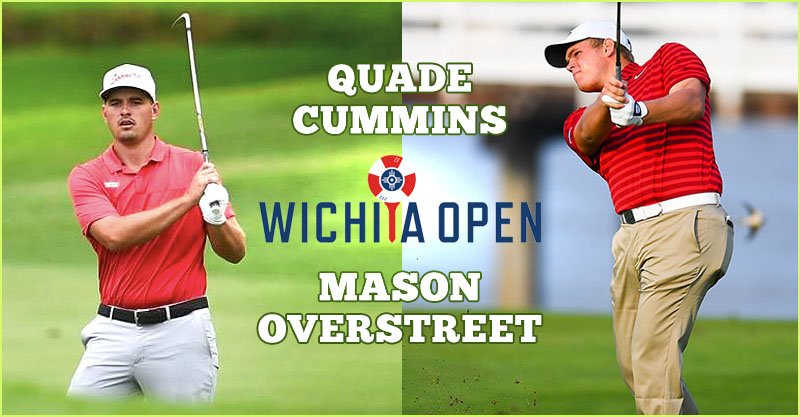 Quade Cummins of Weatherford and Mason Overstreet of Kingfisher were among the eight golfers who played their way into this week’s Wichita Open on the Korn Ferry Tour through Monday qualifying.

Cummins, who two weeks ago led Oklahoma to a runnerup finish in the NCAA Championship, shot 7-under 65 to lead all qualifiers at the Auburn Hills site. Qualifying was divided between Auburn Hills in Wichita and Sand Creek Station in Newton.

Overstreet, who won his pro debut on the All Pro Tour last week in Garden City, Kan., after recently completing his college career with the Arkansas Razorbacks, shot 66 at Sand Creek Station to make it into a playoff with five players for three spots and survive.

Cummins deftly navigated Monday’s test to the tune of seven birdies against zero bogeys, in the process securing his first Korn Ferry Tour start. The recent University of Oklahoma grad earned Forme Tour status via his No. 6 position on the inaugural PGA TOUR University Ranking. He was a three-time All-American as a Sooner and finished his career as the school record holder for par-or-better rounds, birdies per round and low round.

With that type of play this week, Cummins could find himself in the mix in front of rabid crowds at the Robert Trent Jones, Sr.-designed Crestview CC.

Schniederjans survived a 5-for-1 playoff with Chris Naegel, Steven Kupcho, Danny Walker and Shotaro Ban, and he will join his brother Ollie – 2016 Wichita Open champion – in this week’s field.

Charlie Hillier paced the field at the Sand Creek Station GC site, carding 7-under 65 to secure his spot in this week’s field. Hillier, who hails from New Zealand, recorded six birdies and an eagle Monday against a single bogey.

The 2019 University of Kansas graduate is set to make his Korn Ferry Tour debut this week.

Also advancing from the Sand Creek Station site were Gregor Main, Matt Oshrine and Overstreet. Each carded 6-under 66 and survived a 5-for-3 playoff, with Drew Shepherd and Gage Ihrig the odd men out.

In all, 136 players competed for eight spots in this week’s field.

Brendon Jelley of Tulsa was among those to finish a shot outside the playoff at 5-under. He will be playing this week in the APT event at The Club at Indian Springs in Broken Arrow, where last year he shot a 59 in the pro-am.