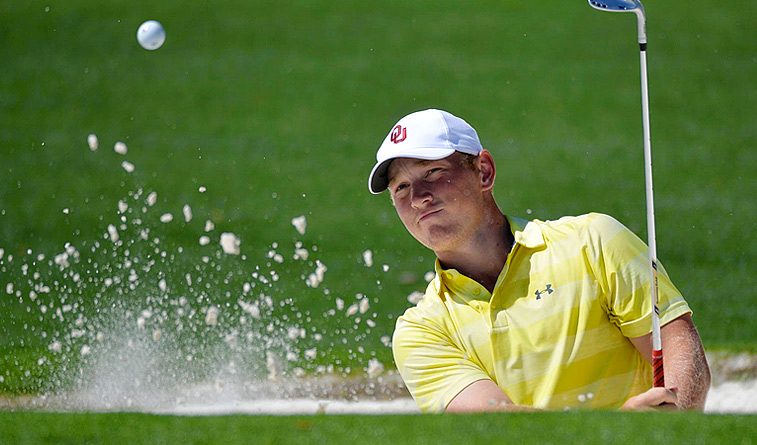 Paced by a career-low 64 (-6) from sophomore Brad Dalke, the No. 14 Oklahoma men’s golf team moved into fourth place after the second round of the NCAA Stanford Regional. The three-day, 54-hole tournament is taking place at the par-70, 6,727-yard Stanford Golf Course in Stanford, Calif.

Dalke’s performance kept him at the top of the individual leaderboard for the second consecutive round with a 36-hole 129 (-11). He currently holds a three-stroke lead over Stanford’s Maverick McNealy, who is ranked as the No. 3 Division I golfer by Golfstat. Additionally, Dalke’s 11-under-par total is lower in relation to par than any other golfer currently competing in any of the six NCAA Regionals.

Competing as the No. 3 seed, the Sooners recorded a 3-under 277 as a team on Tuesday to bring their two-round score to 557 (-3) and advance into fourth. The low five teams and low individual not on those teams will advance to the NCAA finals.

No. 2 seed Baylor paces the 13-team regional at 542 (-18) overall. Top-seeded tournament host Stanford is in second with a 549, and No. 5 Pepperdine sits in third at 555. OU is three strokes ahead of the three-way tie for fifth between Georgia Tech, North Florida and BYU, who each finished the day at 560 (E).

Dalke opened his round strong, carding an eagle on the par-5 hole No. 1. After his second stroke put him within 10 feet on the green, the sophomore curled in a putt for eagle. He went on to pocket six birdies on the day, including four straight on holes Nos. 13-16.

Senior Max McGreevy also finished the day under par, tallying a 3-under 67 to advance 21 spots in the individual leaderboard into a tie for 32nd at 142 (+2) through two rounds. He sunk five birdies and played bogey free on the back nine to mark his 14th round in the 60s of the season.

“Another great performance from Brad today, and it was great to see Max get back in the game,” OU head coach Ryan Hybl said.

Junior Grant Hirschman logged a 74 in the second round, aided by back-to-back birdies on holes 16 and 17. He currently holds a piece of 37th place with an overall 143.

“Tomorrow is a big day, and our guys know that it is all about staying patient and executing properly,” Hybl said.

The final round of the NCAA Stanford Regional is set for Wednesday, and the Sooners’ tee times will begin at 10:20 a.m. CT from hole No. 1. Live scoring will be available on GolfStat.com.

AUSTIN, Texas – Oklahoma State’s men’s golf team used the round of the day at the NCAA Austin Regional on Tuesday to move into second place at the University of Texas Golf Club.

Of the 14 participating teams, the Cowboys were the only squad to break par, tallying a 2-under 282 to move up one spot on the leaderboard at the par-71, 7,355-yard layout. Through 36 holes, OSU stands at 1-over 569 and just four strokes behind host Texas, which maintained its lead after carding a 288 to come in with a 565 total. Ole Miss dropped into third place with its 576 total.

UT’s Doug Ghim followed an opening 68 with a 69 to move into first place in the individual race at 5-under 137.

Kristoffer Ventura continued to lead OSU’s starting five, using a 1-under 70 to move up three spots into a tie for seventh place at 141. The junior turned in a nearly unblemished card that included 15 pars, birdies at the seventh and ninth as well as his lone bogey at the 16th.

Senior Zachary Olsen matched his teammate with a 70 of his own to climb 12 spots into a tie for 12th place at 143. Olsen opened with a birdie at the first before eventually turning in 1-over 36. However, he rallied with a bogey-free inward nine that included birdies at the 13th and 16th to move back under par for the day.

Freshman Viktor Hovland was also among the group tied for 12th place after following an opening 71 with a 72.

Sophomore Zach Bauchou rose 16 spots into a tie for 17th place at 144 after posting a 70 during his second round.

Sophomore Hayden Wood rounded out the starting five with a 75 to stand at 147 and tied for 26th place.

The Cowboys will begin their final round tomorrow looking to secure their 70th NCAA Championship finals berth. OSU will tee off at 8:45 a.m. (CST) and will be grouped with Texas and Ole Miss.