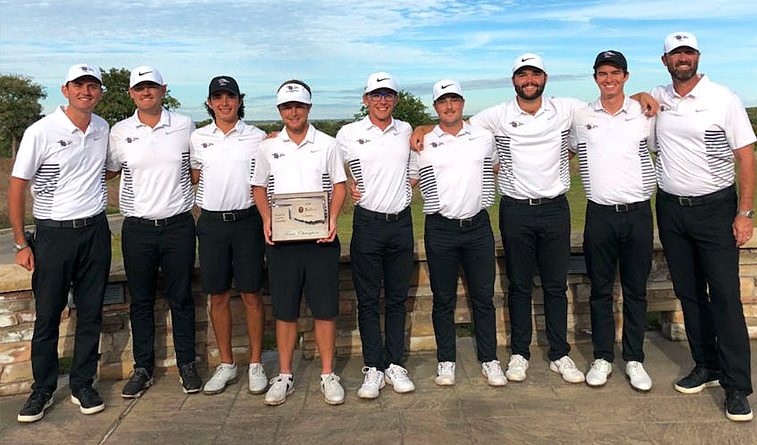 DUNCAN, Okla. (Oct. 23, 2018) – It all had a familiar feeling for Oklahoma Christian on Tuesday – the course, the situation and most certainly, the final result.

With a final-day rally, the Eagles won their second tournament of the fall season, squeaking out a one-shot win over No. 7-ranked St. Mary’s (Texas) in The Territory Classic at The Territory Golf Club.

Juan Pallach, Garrett White and Trevor Norby all posted top-10 individual finishes for the 16th-ranked Eagles, who won The Territory tournament for the second straight year. It’s the first time OC has won the same tournament in consecutive years since winning the Texoma Championship at Chickasaw Pointe Golf Club in Kingston in 2010, 2011 and 2012.

The Eagles rallied thanks to under-par rounds by White, Pallach and Andres Brictson. Pallach, a senior from Mexico City, shot a 1-under 71 on the 7,077-yard course, while White, a senior from Lindale, Texas, and Brictson, a sophomore from Merida, Mexico, each posted a 70.

White and Pallach tied for fifth at 143 (1-under), three shots behind the medalist, Jake Stevenson of St. Mary’s. Pallach led the 55-man field with 11 birdies in the tournament.

Brictson’s stellar round resulted in a tie for 14th place at 146. Norby, a junior from Carlsbad, Calif., who held a share of the first-round lead, shot a 75 but held on to tie for seventh. The Eagles’ No. 5 player was senior Cameron Brown, who tied for 28th at 151 after a final-round 76.

OC’s Tuesday team score of 286 put the Eagles at 575 for the two-day tournament, while St. Mary’s finished at 576 and Midwestern State at 577. The Eagles will take a 3-1 head-to-head lead against St. Mary’s – a Heartland Conference rival – entering the spring season.

The team title was the 62nd for the Eagles in their program’s history and they’ve now won two tournaments in each of the past two fall seasons. Last month, OC won the Missouri Southern Fall Invitational at Shangri-La Golf Club in Monkey Island.

Two OC seniors played as individuals in the tournament. Ethan Smith placed 13th at 145 after shooting a final-round 74, while Grady Neal’s 81 left him at 157, tied for 44th.

The Territory Classic was the final tournament of the fall season for OC. The Eagles will open the spring season on Feb. 4-5 in the California State-San Marcos Fujikura Invitational, to be played at Shadowridge Golf Club in Vista, Calif.

Rogers State took fourth and sophomore Luke Palmowski finished second. The Hillcats improved by 10 shots in round two and finished with a total score of 594 after scores of 302 and 292.

Playing as an individual, sophomore Peter Cummins placed 25th overall. He put together a score of 6-over-par 150 for the two rounds. The sophomore tallied scores of 74 and 76.

ALBUQUERQUE, N.M. – The Rogers State women’s golf team ended the fall season with a fifth place finish at the Skyhawk Fall Intercollegiate at the UNM Championship GC. The Hillcats posted rounds of 296 and 307 for the 36-hole total of 603.

Sophomore Jess Whitting carded a 1-under-par 72 to pace the team. For the two rounds, Whitting tallied a mark of 1-under-par 145 to tie for fifth in the field. For the 36 holes, the sophomore led the field with nine birdies. She was 2-under-par on par 3s and par 5s in the tournament.

Kristina Gutierrez of Texas A&M-Kingsville was the individual medalist at 5-under-par 141. She closed with a 4-under-par 69 today. Three golfers tied for second at 3-under-par 143.

West Texas A&M took the team title with a two-round mark of 590. Texas A&M-Commerce and Midwestern State tied for second at 594. CSU-San Marcos placed fourth at 599 with RSU fifth at 603.