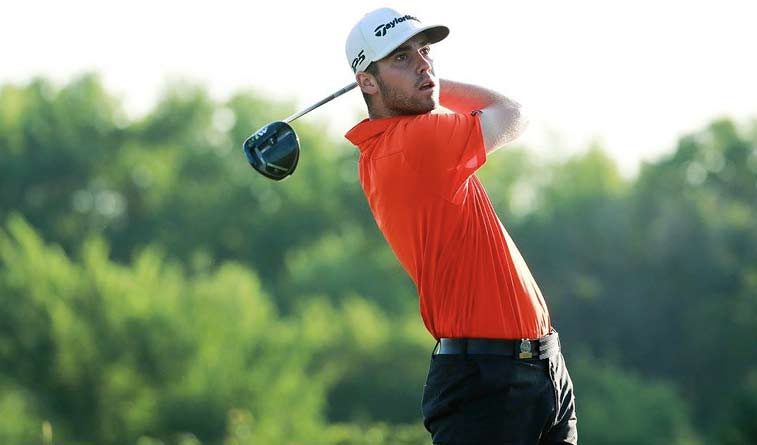 ANDOVER, Kan. – Matthew Wolff ended the U.S. Junior Amateur runs of Oklahomans Logan McAllister and Austin Eckroat. The only consolation for state golf fans is he will be playing for Oklahoma State the next four years.

Wolff won the 18th hole this morning to edge Eckroat 1 up in a quarterfinal match at Flint Hills National Golf Club in Andover, Kan., that went back and forth all day. Eckroat tied the match with a birdie on the par-4 16th but got in trouble on the 18th and conceded an eagle to Wolff. Eckroat made four birdies but bogeys on 15 and 18 proved costly.

On Thursday, Eckroat, 18, of Edmond, Okla., won two matches in convincing fashion Thursday to advance to the quarterfinals while Wolff came from behind to edge McAllister in 19 holes. Eckroat, who was competing in his second U.S. Junior Amateur after reaching the Round of 16 last year, defeated Ryan Gerard, 17, of Raleigh, N.C., 5 and 4. In his morning Round-of-32 match, Eckroat raced past Yuki Moriyama, 16, of Japan, 7 and 5.

“Last year, I had the same record so getting past it, that’s great,” said Eckroat, the top seed and medalist who will attend Oklahoma State University in the fall. “I want to keep it going, but knowing that I did get further this year is pretty great.”

“You know I can’t go without a fight,” said Wolff, the No. 8 seed who won Nos. 17 and 18 to force an extra hole against McAllister. “[My] putter wasn’t really cooperating in the beginning, and he was draining a lot of putts. But I knew I still could give him a run for his money.”

The U.S. Junior Amateur continues with the quarterfinal and semifinal rounds on Friday. The championship concludes with a 36-hole final on Saturday, starting at 7 a.m. CDT. Fox Sports 1 (FS1) will provide live coverage both days.

With the match all square through six holes in the Round of 16 against Gerard, Eckroat won four consecutive holes to take control. He made a 30-footer for birdie on the par-4 seventh and then set up another birdie by striking a 175-yard 9-iron to within 18 feet on No. 9. He followed with a 6-foot birdie putt on the next hole.

Eckroat made easy work of Moriyama in the Round of 32. He leaped to a 4-up margin through the opening nine holes. He birdied No. 2 by hitting a 58-degree wedge to within 6 feet and was conceded an 8-foot birdie putt on No. 9. Eckroat posted his first bogey of the championship, ending a streak of 57 consecutive bogey-free holes, when he found the right greenside bunker with his approach on No. 7.

Wolff, who reached the Round of 16 in the 2015 Junior Amateur and advanced to match play in last year’s U.S. Amateur, won the par-3 17th when McAllister found the water hazard with his tee shot. He made a 13-foot birdie putt on No. 18 to square the match. He completed the rally with an 8-foot birdie putt on the first extra hole, the par-5 first.

Now, the future college teammates and roommates this week must face each other.

“That’s going to be weird, especially that we’re rooming together, because one of us won’t be staying another night,” said Eckroat about the pending matchup against Wolff. “I want him to do well, but I also want to beat him.”

Noah Goodwin, last year’s U.S. Junior Amateur runner-up, also won two matches to advance. He registered a 3-and-1 triumph over Joe Highsmith, 17, of Lakewood, Wash., and defeated Sean Maruyama, 17, of Encino, Calif., 5 and 3, in the afternoon.

Goodwin, who is playing in his fourth Junior Amateur and has twice reached match play in the U.S. Amateur, won holes 9 and 11 with birdies against Maruyama, whose father Shigeki has won three PGA Tour events, to build a 3-up advantage. He delivered a 9-iron to within 8 feet on the par-4 ninth and two-putted for birdie on the par-5 11th after hitting a 5-iron to the middle of the green. In the Round of 32, Goodwin closed out Highsmith with a 15-foot birdie putt on No. 16 and a conceded birdie on the following hole.

“I just think part of it is peaking at the right time,” said Goodwin about how his play has improved as the week has progressed. “It’s just about kind of figuring things out. My swing is just getting tighter with more and more reps as the week goes on.”

Davis Shore, 18, of Knoxville, Tenn., won both of his matches, 1 up, in dramatic style with birdie putts on the final hole to reach the quarterfinals for the first time. Shore, who is competing in his fourth U.S. Junior Amateur, made a 10-footer from below the hole on the par-5 18th to beat Ricky Castillo, 16, of Yorba Linda, Calif., in the Round of 16. He struck a 56-degree wedge to within 10 feet above the hole to set up the winning putt in the second round against Peter Fountain, 16, of Raleigh, N.C.

“Those last two matches were probably two of the toughest matches I’ve ever played,” said Shore, who narrowly missed qualifying for this year’s U.S. Open when he came up short in a 5-for-2 playoff in the Memphis, Tenn., sectional qualifier. “I knew today was going to be tough, but I didn’t think it was going to be that hard. That was unbelievable.”

Garrick Higgo, 18, of South Africa, knocked off Cole Hammer, 17, of Houston, Texas, 2 and 1, in his Round-of-16 match to make his first quarterfinals appearance. Higgo took advantage of the par 5s to take a lead he would not relinquish. He two-putted from 40 feet on No. 5 and earned a conceded birdie on No. 11 when he found the green with a 3-iron from 210 yards.

Earlier in the day, Hammer twice rallied from 2 down in his second-round match against Frankie Capan, who claimed this year’s U.S. Amateur Four-Ball title with partner Shuai Ming Wong. Capan won holes 9 and 10 with pars for a 2-up margin before Hammer won four of the next five holes. He started his comeback by landing a 242-yard hybrid on the fringe to set up a two-putt birdie on No. 11. On No. 13, he struck a 54-degree wedge to within 6 feet for another birdie and the lead.

Aman Gupta, 18, of Charlotte, N.C., will face Higgo in the quarterfinals. Gupta won a pair of 2-and-1 decisions Thursday. He knocked off Trent Phillips, 17, of Spartanburg, S.C., in the afternoon and Jackson Solem, 18, of Longmont, Colo., in the morning.

Rayhan Thomas, 17, of India, eagled the drivable par-4 sixth en route to his Round-of-16 victory over Jake Beber-Frankel, 15, of Miami, Fla. Thomas fired his tee shot to within 20 feet and then sank a 15-foot birdie putt on the following hole as he posted a 5-and-4 triumph. Earlier in the day, Thomas defeated Mac Meissner, 18, of San Antonio, Texas, in 19 holes.

“No, not surprised at all,” said Thomas about reaching the quarterfinals in his first USGA championship. “After stroke play, I knew I had what it takes to maybe win this event.”

ANDOVER, Kan. – Results from Thursday’s third round of match play at the 2017 U.S. Junior Amateur Championship,

*Quarterfinal round winners advance to the semifinal round of match play on Friday, beginning at Noon.