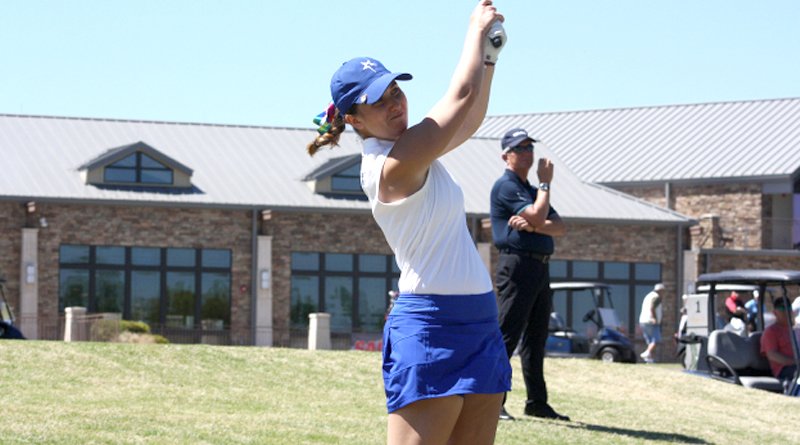 The 11th-ranked Stars became the only team to tally an under-par score during the first round. OCU held a six-stroke lead after shooting a 287.

Oklahoma City’s Melissa Eldredge held the individual lead by three shots. Eldredge, a junior from Eufaula, Okla., posted a 35-32–67, sinking a birdie on the 18th hole for her fifth birdie of the round. She converted a birdied on the par-5, 503-yard 13th hole. Eldredge played bogey-free throughout her 18 holes.

Eldredge and the Stars come off winning the Sooner Athletic Conference individual and team championships April 19-20 at Lincoln Park.

“I actually started off kind of slow,” Eldredge said. “I left a couple of putts just dead to center short. It’s hard to say that 67 wasn’t my best, but it could have been lower. I just tried to stay really calm today and just took it one shot, one hole, at a time and not get ahead of myself. It’s a four-day tournament, and it takes a lot to be at the top in the end. As long as my team is on top at the end, I’m fine with it.”

As a team, the Stars had only one double bogey. OCU made 12 birdies and par 64 times.

The second round of the tournament tees off 7:30 a.m. Wednesday. The Stars begin their rounds 1:14 p.m. off the 10th hole Wednesday.

OCU’s Lauryn Pritchard carded a 36-36–72, which was tied for sixth place. Pritchard, a freshman from Allen, Texas, pounded in birdies on Nos. 4 and 5. The par-5 fifth hole measures 451 yards.

Lauren Behnken from OCU shot a 39-36–75. Behnken, a freshman from Tulsa, Okla., hit a birdie on No. 18. McKenzie McCoy, a sophomore from Beggs, Okla., provided the Stars with a 37-39–76. McCoy picked up birdies on the fifth and eighth holes.

Nicole Gargarella from Victoria (British Columbia) buried a hole-in-one on the par-3, 144-yard 12th hole, her third hole of the day, using her 5-hybrid club.

Fourth-ranked Dalton State (Ga.) had a second-place 293 with fifth-ranked British Columbia recorded a 294 to be in third. No. 1-ranked Keiser (Fla.) stood in fourth with a 297. Second-ranked defending national champion SCAD Savannah (Ga.) tied with 19th-rated Northwestern Ohio for eighth place at 302.

The temperature started in the mid-70s and reached into the 80s. Wind gusts reached 25-30 mph mainly in the afternoon.