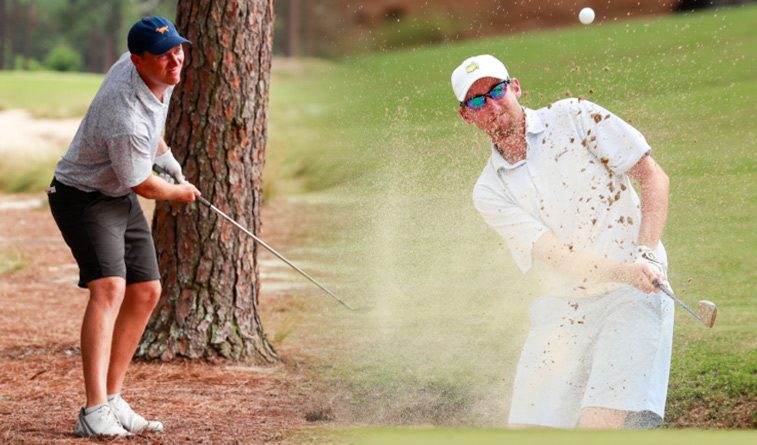 VILLAGE OF PINEHURST, N.C. (May 31, 2017) – The first two editions of the U.S. Amateur Four-Ball Championship produced a pair of mid-amateur champions and two college teammates, respectively. The third went to a duo of rising high school seniors.

Seventeen-year-olds Frankie Capan and Shuai Ming (Ben) Wong, who were unceremoniously eliminated in the Round of 16 last year at Winged Foot Golf Club, registered five birdies over the final eight holes in producing a 2-and-1 victory on Wednesday over Kyle Hudelson and Clark Collier at Pinehurst Resort & Country Club’s Course No. 2.

Wong, who was born in Hong Kong, China, but has lived the last three years in The Woodlands, Texas, delivered the final blow, holing a 10-foot birdie putt on the 17th green.

“Those kids, oh my goodness,” said Collier. “Those guys are going to be pros. They are really, really good.”

The victory certainly was sweet redemption for Capan and Wong.

“It’s pretty unreal. It’s still sinking in,” said Wong, who has committed to play at Southern Methodist University in 2018, the same school that produced last year’s champions, Benjamin Baxter and Andrew Buchanan, and the late Payne Stewart, who claimed the 1999 U.S. Open at Pinehurst and whose bronze statue with his famous fist-pump pose from the 72nd hole greets resort visitors behind the 18th green of Course No. 2.

“The last putt on 17, Frankie and I had the mentality of us always being 1 down and playing our hardest. Right now it’s just kind of sinking in that we won the whole thing. We obviously played our best golf this week, and [I am] just really, really just overwhelmed right now.”

Added Capan, of North Oaks, Minn., who has committed to play for the University of Alabama in 2018: “This format is just so much fun. To have it end like that, we were just pumped to get back and get another shot at it.”

USGA officials set up the 7,161-yard, par-70 layout for the final day of match play – which included the semifinal and championship matches – using the same hole locations from the final rounds of the previous three U.S. Opens conducted on Course No. 2 (1999, 2005 and 2014).

Although the final never reached No. 18 and the famous back-right hole location where Stewart dramatically converted an 18-foot par putt to defeat Phil Mickelson by one stroke for his second U.S. Open title, Wong felt his spirit, especially after receiving a text from SMU coach Jason Enloe to remind him about Stewart’s heroics. Stewart died in a plane crash four months later, but members and resort guests are reminded of his 1999 triumph, from photos and memorabilia inside the clubhouse to the statue outside it.

“I know he was watching over … and it’s pretty special to me what happened in 1999,” said Wong, who was born five months after Stewart’s victory.

Perhaps Wong vicariously felt Stewart’s legacy, especially during the second nine when he began the side’s comeback from a 2-down deficit by converting a 20-foot birdie on the par-5 10th. He also birdied No. 12 from 8 feet to square the match and then helped the side halve No. 13 by holing a 3-footer. On No. 14, Capan hit a remarkable approach from the sandy area right of the fairway to within 12 feet. His birdie would eventually be conceded after Hudelson and Collier made their lone bogey of the match.

“I flushed it, like absolutely flushed it, and I was in the zone,” said Wong of the tee shot. “I knew they were going to make par, so I just had to close it out.”

The champions each receive a gold medal, custody of the Four-Ball trophy for one year and a 10-year exemption to the U.S. Amateur Four-Ball, while the runners-up received silver medals and a three-year exemption, provided the sides remain intact.

The exemptions were sweet music to the ears of Collier, 27, and Hudelson, 29, who a week ago got the call from the USGA to tell the Oklahoma City natives – the former now lives in Dallas and the latter in Scottsdale, Ariz. – they were in the field as alternates.

And what a whirlwind week it was.

The longtime friends nearly made the seemingly impossible dream come true. Their run to the championship match included a pair of 19-hole victories – one of which occurred in Wednesday morning’s semifinals against 2016 semifinalists Patrick Christovich and Garrett Rank – and a 1-up quarterfinal victory over 2015 champions Nathan Smith and Todd White, two of the more decorated mid-amateur golfers in the country. Smith owns a record four U.S. Mid-Amateur titles and both were members of the victorious 2013 USA Walker Cup Team.

Hudelson and Collier don’t have any such credentials; this was, in fact, their first-ever USGA championship. Thanks to Cole Hammer and Philip Barbaree, an exempt team that was forced to withdraw when the latter’s Louisiana State University golf team advanced to the NCAA Championship, they got a chance to compete.

Treating this unexpected trip to the Sandhills like a couple of buddies on vacation, Collier and Hudelson arrived with a carefree spirit that quickly won over spectators. Their nothing-to-lose attitude, laughter between shots and kinship kept them loose the entire week.

“We have no history,” Hudelson said after their semifinal win. “You could Google us and the only thing that would pop up is this championship. You’d have to search deep into Google.

“I was joking with Clark that we got a year’s worth of pressure golf shots packed into one week.”

Added Collier: “This might be more rounds of golf than I’ve put on the books this year.”

“We were fortunate to keep it at 2,” said Capan of the early deficit. “I know in match play the difference between 2 down and 3 down is a lot. So I think we made a clutch par on hole 6, and kept it at 2 down, and I knew if we kept them there, we didn’t need to really force anything.”

In the morning semifinals, Wong, who will compete in U.S. Open sectional qualifying on June 5 in Dallas, and Capan used an eagle-2 on No. 13 to pull away from Floridians Marc Dull, of Winter Haven, and Chip Brooke, of Bartow, 4 and 2.

The U.S. Amateur Four-Ball Championship is one of 13 national championships conducted annually by the USGA, 10 of which are for amateurs. It consisted of 36 holes of stroke play – one round each on Courses No. 2 and 8 – followed by five rounds of match play on Course No. 2.