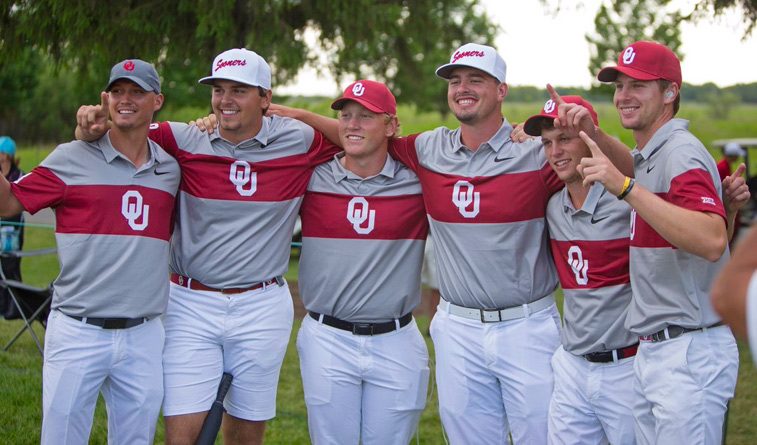 The Oklahoma men’s golf team claimed the 2017 NCAA Championship with a 3-1-1 victory over Oregon during Wednesday’s championship final in Sugar Grove, Ill. The Oklahoma men’s golf team entered the 2017 NCAA Championships flying under the radar. The Sooners left with the trophy.

Behind a 3-1-1 victory over Oregon in Wednesday’s championship final, OU claimed the title of national champion.

The Sooners were chosen as the No. 13 seed entering stroke play, but the team arrived in Sugar Grove, Ill., with the confidence that it had the firepower to finish No. 1. Throughout the season, OU earned two regular season wins and a program-best five individual titles, setting team and individual records along the way.

This week at the NCAA Championships, everything clicked for the Sooners. A season’s worth of hard work paid off in the best way possible: a national title.

“This is what we come to work for every day, and that’s why you’ve got to come out and practice every day,” eighth-year head coach Ryan Hybl said. “This isn’t about me, it’s about what these guys were able to do this week… We give them the resources to be successful, but ultimately, especially in this game, it’s on them individually to try and get as much as they can out of their own games.

“We didn’t have a weak link this week, and that’s big because when you’re playing team golf, a lot of times somebody just doesn’t have their game, you know, doesn’t show up,” Hybl continued. “And all these guys, everybody won a match, at least one match, and they all produced in stroke play… It was a great week from start to finish for our guys.”

This marks the Sooners’ second national title in program history, with the first coming in 1989 under head coach Gregg Grost. The 2017 championship comes in the program’s second all-time and second consecutive appearance in match play, which was introduced to the championships in 2009.

“We’re just really excited about having the opportunity for one today, to go out there and win, and the guys did it,” Hybl said.

“They executed when they had to, and I can’t be any more proud of these guys than how I feel right now. I know my assistant Jim Garren feels the exact same way.”

For the second consecutive round, Hale got the Sooners on the board first, defeating Oregon’s Norman Xiong, 4 and 3. While the two golfers went back and forth at the start of the match, Hale won the sixth hole to earn the advantage and take control of the match. He grew his lead to 3-up with wins on No. 8 and No. 10. On the 15th hole, Hale sunk a long putt to win the hole and clinch the match.

“I just felt really comfortable this week,” Hale said. “I played [well] in stroke play, and I just kind of had a calmness about me this week. Whenever I stepped up on the first tee, I just knew it was going to be a good day. My last two matches, though, I played really well. I didn’t really give up any easy holes, which is huge in match play.

“But, I couldn’t be prouder of this team and what we’ve done this year,” he continued. “Nothing is going to ever replace this. This is the coolest moment I’ve ever had in golf, and I can’t thank my brothers enough for what we did this week.”

McGreevy grew OU’s lead to 2-0 with a 3 and 2 victory over Edwin Yi. Competing in his last round as a Sooner, McGreevy never trailed his opponent. McGreevy took an early lead, winning holes Nos. 2, 4 and 5 and remained consistent to hold the advantage and extend his team’s lead.

“I couldn’t be happier that I’m right here winning this championship with the guys on my team,” the senior said. “It’s been a long journey. I’ve had a lot of opportunities, whether it be a Big 12 championship or national championship. This will be my fourth one, and to go out on this note and just have the opportunity that we had today, it’s what we fight for every single time. It’s just the opportunity. Luckily we were able to seize that opportunity and come out on top. It was a fun day.”

Dalke’s 2 and 1 win over Solomon Raza sealed the national title for the Sooners. While Dalke won the first hole and led throughout the first eight holes, Raza took the ninth to put the match at all-square headed to the back nine.

After Dalke won holes Nos. 12, 14 and 15, he took a 3-up advantage with three holes remaining, but Raza won the 16th to keep the match alive. Still, Dalke maintained his composure to halve No. 17 and earn the Sooners their second title in program history.

“This has been a week to remember for sure,” Dalke said. “We’ve had this goal in our minds since Pebble Beach, the beginning of the year. We knew we had the team to do it. We have a lot of depth on our team I feel like, and we’re all super talented, we’re gritty, and we fight until the very last stroke.

“It’s just been such a cool ride this week, and to be able to have this opportunity today against a great Oregon team, it was just a dream come true, just to have the opportunity, and then to be able to go out there and finish it off and finish the fight and… to get that big ol’ trophy over there,” Dalke continued. “It’s just been such a cool week and it was a cool day, and it was just fun to see the national-championship-clinching putt.”

Junior Grant Hirschman halved his match with Oregon’s Ryan Gronlund. The Sooner battled throughout the entire round, and he fired a birdie on the challenging 17th hole to get the match to all-square before the match was suspended after Dalke’s win.

After going 2-0 in match play on Tuesday, junior Rylee Reinertson fell to Oregon’s Wyndham Clark, 1-down.

“It’s been a long season, and it’s very gratifying knowing that we get to hoist the trophy,” Hybl said.

The Sooners will return to Norman on Thursday, and fans are encouraged to welcome back the 2017 NCAA champions with a celebration at Jimmie Austin OU Golf Club’s clubhouse at 4 p.m. CT.