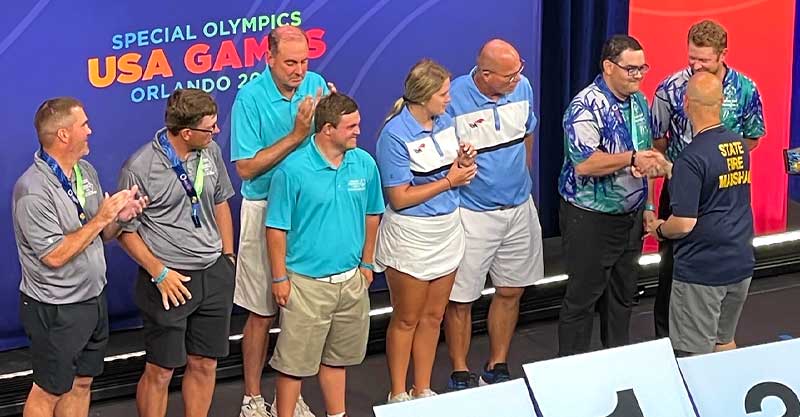 Special Olympics athlete Anthony Taylor, a member of the First Tee of Tulsa, teamed with his unified partner Austin Quentin to win a bronze medal in their division in the recently concluded Special Olympics USA Games in and around Orlando.

Quinten, the program manager at First Tee of Tulsa located at Mohawk Park Golf Course, has been working and playing with Taylor, who is legally blind in addition to having some other developmental hurdles, for several years.

The two competed in a division in which the format was 72 holes of alternate shot. They compiled scores of 82-79-82-83 on a course Quinten said was playing both long and difficult.

Quinten said most of the teams were comprised of a unified partner and a Special Olympics athlete with a mental challenge but only one other athlete had both mental and physical obstacles to overcome as does Taylor.

Under the format used, the two split tee shots no matter who had putted out on the previous hole. Taylor, a fine golfer when lined up properly, played great down the stretch of the final round, Quinten said, as they moved up from seventh place to a medal position in third over the final three holes.

“The course was difficult to say the least,” Quinten said. “It was surprising to me how long and difficult they set it up. There were some really good players and the team from Illinois that won it shot 75 on the final day, that’s pretty darned good.

“Anthony was going 400 miles per hour when we got there and it was hard to calm down. He was jacked to be representing Oklahoma in the USA Games, it’s quite an honor. He played great the last six holes and we went from out of any medal discussion to finishing third. It was phenomenal.”

Other than joining most of the Oklahoma team in contracting Covid 19 at the games, Quinten said it was a fantastic experience for the athletes, coaches and partners. He said they visited the various Disney theme parks and Taylor loved the roller coasters.

“He’s got memories that will last a lifetime.”

Florida Governor Ron Desantis threatened to fine Special Olympics $27.5 million if it had a Covid vaccine mandate for competitors and also actively discouraged the use of masks to mitigate the spread of the disease. Quinten said both he and Taylor took a week or more to recover and were fortunate to fly back before testing positive.

“I lost my sense of taste, extremely fatigued and was pretty much bedridden for a few days,” Quinten said. “We got a letter when we got back from the head of the Oklahoma team congratulating the athletes on how they performed but saying the bad news is the vast majority of the Oklahoma team had tested positive.”