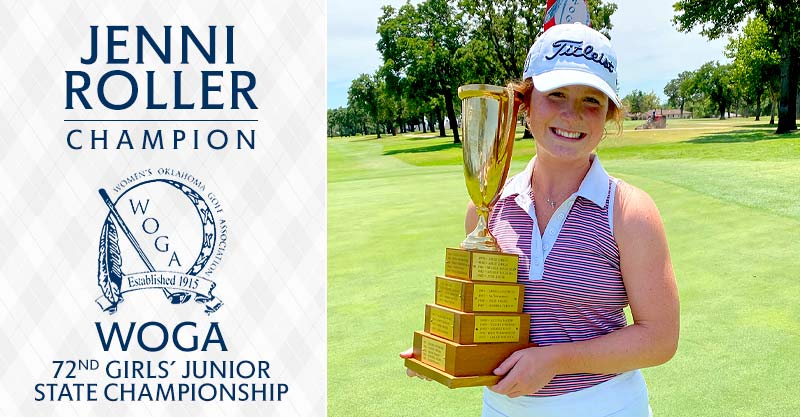 Roller contributed to losing most of her five-shot advantage to start the day by making bogeys at holes eight and nine. But when the lead had dwindled to a single shot, she responded.

On the par-4 11th hole, she belted a drive down the fairway, then lofted a 50-degree wedge from 100 yards to just behind the hole and spun it back in for an eagle. That shot moved her back to even par on her round and reestablished a three-shot lead on Blonien, a lead that grew to four when Blonien bogeyed the par-4 12th.

By the time she rolled in a 25-foot par-saving putt at the last, Roller had kept that four-shot advantage, finishing at 3-over 143 after rounds of 70-73 for her first victory in the championship flight of the WOGA Junior.

Blonien, whose older sister Megan was a four-time state champion at Altus, finished second at 147 (75-72). Jaiden Gregston of Duncan and Lucy Darr of Stillwater, daughter of Oklahoma State assistant golf coach Donnie Darr, tied for third at 150 after each shot rounds of 76-74. Josey Cavitt of Burneyville (77-77) and Olivia Coit of Edmond (78-76) tied for fifth at 154. Complete scores are below.

Blonien, who won the Class 5A state championship this spring, was energized after making birdie at the par-5 10thhole, but said Roller’s eagle on 11 was tough to overcome.

“It was a great shot obviously,” she said. “It landed right behind the hole and spun right back in the middle. You can’t be mad at good golf. I had a good chance at birdie there as well but missed that, then missed a 5-footer on the next hole for par. Last five holes I missed several putts that I normally make. I kept battling but I needed to make those putts.”

Roller said she was thrilled with the victory in an event she’s wanted to win and for an organization she admires greatly.

“The ladies of WOGA do such a tremendous job with this event and have always been so nice and supportive of me,” she said. “This one means an awful lot to me.”

She listed it as her favorite victory in her recent torrid run, which includes wins in the Class 3A State Championship, where she shot 62 in the first round, the Oklahoma Junior Masters and a sweep of the Oklahoma Golf Association Junior Amateur stroke and match play titles.

Besides the eagle, the second round was a bit of a struggle. She used 3-wood off the tee most all day as her driver was misbehaving and didn’t make her normal allotment of putts, two areas she hopes to iron out before competing next week in the U.S. Girls Junior Amateur at The Club at Olde Stone in Bowling Green, Ky.

She’ll have one day at home to work on those, then begin the drive and play practice rounds this weekend. The tournament begins Monday with two days of stroke play followed by a cut to the low 64 for match play beginning Wednesday.

“I hit four fairways today and just hitting it everywhere, so I’ve got to get that figured out,” Roller said. “But I love playing in this event. I’ve been playing in it since I was 10 and had won the younger division but never the championship flight. So I’m super excited about that.”

Roller will play in the U.S. Girls Junior, followed by the PGA Junior then the Gateway First Bank Tulsa Open on the AJGA circuit July 25-28 at The Oaks Country Club, a tournament organized and hosted by her mother Maggie Roller, before beginning practice at the University of Tulsa in August.