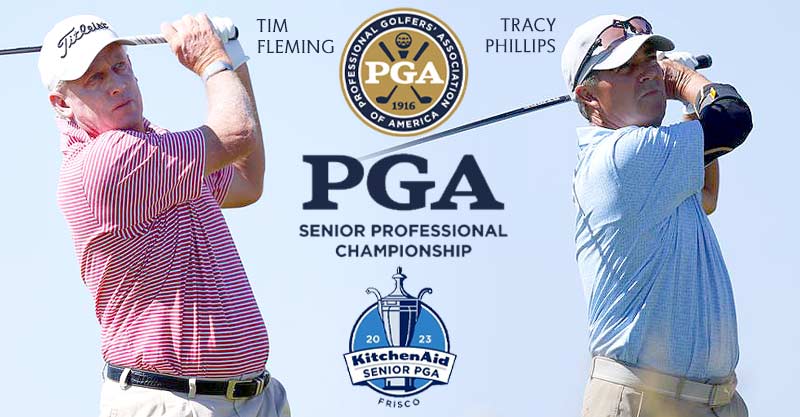 SANTA ANA PUEBLO, New Mexico (Oct. 16, 2022) – Matt Schalk—PGA Director of Golf at Colorado National Golf Club—knew nasty weather would play a factor in Sunday’s final round at the 2022 Senior PGA Professional Championship. After his Saturday round, he said he’d assess the conditions Sunday morning and come up with a number to aim for.

“I thought 76 would be my number,” Schalk said. “I thought if I could shoot a couple over on each side, maybe battle to that, that would be the number.”

Schalk, representing the Colorado Section, did one stroke better. His three-over-par 75 put him at 10-over par 278, good enough to claim his first 2022 Senior PGA Championship title and the Leo Fraser Trophy.

Steve Schneiter, an Assistant PGA Professional at Schneiter’s Pebblebrook in Sandy, Utah, placed second at 8-under par 280 after firing a 5-over par 77 in the final round. A four-way tie for third place at 7-under par led to a playoff to determine the top five.

Tim Fleming, director of golf at Oklahoma City Golf & Country Club, battled the tough conditions for a final-round 72 to move up 30 spots and finish tied for 17th at 1-over. Teaching professional Tracy Phillips of Tulsa had a 79 in the final round to fall into a tie for 26th. Both qualified for the 2023 KitchenAid Senior PGA Championship May 25-28 at Fields Ranch East at PGA Frisco in Frisco, Texas, the first major championship to be held at the new home of the PGA of America.

After calm conditions and scores in the 60s during the first three rounds of the championship, Sunday’s final round featured gusty winds and rain at Twin Warriors Golf Club.

“It definitely felt like it was a good 25-30 mph steady with gusts going,” Schalk said. “I had my ball blowing around on a green when I was walking up to it. You never could quite get comfortable out there, but everybody had it. I went into it trying to not make doubles. Pars were like birdies. I just tried to make bogeys and understand that it wasn’t the end of the world if you made one, because you knew everyone was going to be making them, too.”