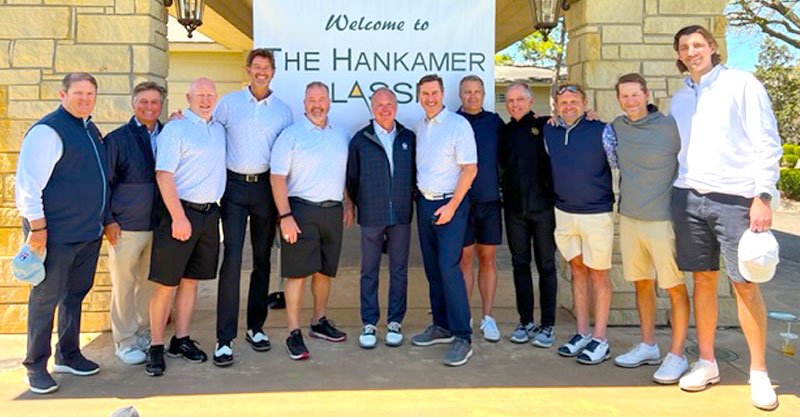 Several former junior golf stars from Edmond made what has become an annual pilgrimage to Houston on March 23 to support one of their former mentors, Baylor golf coach Mike McGraw, in the 39th Annual Curtis Hankamer Classic, a fundraiser that benefits the Baylor golf team.  The last several years it has been hosted at The Golf Club of Houston in Humble.  Designed by Rees Jones and David Toms, the Tournament Course previously hosted the Shell Houston Open and is regarded as one of the best conditioned courses on the PGA Tour.

McGraw, a three year letter winner and All American golfer for the Central Oklahoma Bronchos, received his degree in Broadcast Journalism in 1982.  That same year, McGraw started writing a weekly golf column for the Edmond Evening Sun and continued to do so thru 1997 when he took a job offered to him to assist Oklahoma State golf coach and legend, Mike Holder.

McGraw started running the Edmond junior golf program at KickingBird for Art Proctor in 1983.  He received his teaching certification and started teaching at Sequoyah Middle School and was an assistant coach for the golf team at Edmond Memorial from 1984 to 1993, years that they dominated Oklahoma High School golf.  The first four years of Edmond North High School, McGraw, as head coach led them to three state titles.He spent seven seasons as an assistant for the Cowboy men and they won the 2000 National Championship.  The 2004-05 season he was head coach for the OSU Cowgirls.

Holder took over the Athletic Director position in 2006 and named McGraw as his successor. He led the Cowboy men to a national title that year and a runner up finish in 2010.  Following a few disappointing seasons, Holder fired McGraw following the 2012-2013 season.  McGraw was hired by his good friend, Jay Seawell, to assist him at the University of Alabama for the 2013-2014 season and in a touch of irony the Crimson Tide and Cowboys faced each other in the final match for the national championship at Prairie Dunes CC in Hutchison, KS.  In a riveting final the Tide prevailed over the Cowboys.  It was a difficult day for McGraw as he loved the players on both teams.

Right after that tournament the head coaching job at Baylor opened up, McGraw accepted, he was able to return to a place he is familiar with, the rich harvest of high school and junior golf in Texas. McGraw is currently in his 8th season at Baylor and intends to coach several more years.  Baylor is a great fit for McGraw, as he is encouraged and able to share his deep faith.  His wife Pam, a graduate of Oklahoma Christian University, is from Houston and still has family there.

McGraw, a voracious reader, wrote a book about his life in coaching, published in 2017 titled, Better Than I Found It.  With the help of his assistant coach, Mikkel Bjerch-Andresen they host a podcast I recommend of the same title, Better Than I Found It, you can download on your Podcast app, they have 88 episodes now and add a new one each Monday at 7:00am CST.

Above is the crew that traveled to support the tournament: Left to right, Steve Steele, 1982 graduate of Edmond Memorial and member of Edmond’s first 5-man state title team in 1981, he returned to Edmond in 2005 and is a Realtor.  Bryan Gathright, a Golf Magazine Top 100 teacher in America, coach of PGA Tour winners, Notah Begay, Cameron Beckman, and Jimmy Walker. Bryan currently coaches Baylor freshman Zach Heffernan, who McGraw says is “pound for pound the longest hitter in college golf”. Bryan teaches out of The Clubs of Cordillera Ranch near San Antonio, back in the 80’s Bryan was an assistant professional at Oak Tree National.  Bill Langwell, 1985 Edmond Memorial grad, works in Oil and Gas Services and lives in Edmond. Chris Rouk, 1985 Edmond grad works in Information Technology and lives in Dove Canyon, CA.  Rich Spurlin, 1985 Edmond grad, he is the GM at Eugene CC and lives in Oregon.  Abe Cornish, 1986 Edmond grad, an Investment Advisor, lives in Edmond and was the 1985 Oklahoma State High School Individual Champion.  Terry O’Hara, 1985 Edmond grad, works in Communications and resides in Baltimore, MD.  Chad Stanford, 1990 Edmond grad, he is an Attorney/Aviation and lives in Edmond. Mike McGraw, Baylor Men’s Golf Coach, Waco, TX.  Dustin York, 1992 Edmond grad, member of three Edmond Memorial State Championship teams, professional golf instructor, lives in Edmond.  Austin Miller, he is the head coach of the University of Oklahoma Hockey team and lives in OKC.  Andrew Green, 2008 Edmond Santa Fe grad, he is a Realtor and lives in OKC.

McGraw was the lead founder of the Bill Nicklas Memorial Junior Golf Foundation in 1993, the organization hosts junior tournaments at Kickingbird, recognizes the accomplishments of Edmond’s three public high schools and also Oklahoma Christian School with a school year end banquet and does community outreach at several senior centers in the area with the help of high school golfers and coaches.  In 1995 he started the Edmond Junior Golf Hall of Fame, which York, Cornish, Steele and Green have been inducted into, it currently resides at Edmond Golf store in downtown Edmond.  When the clubhouse at Kickingbird is completed in 2023, it will find a new home there.

The guys had a great time, and each man was on a team that finished in the top three of the net or gross flights and took home some really nice swag donated by PING golf. The six foot eight Green also won the long drive by 20 yards and Steele came away the winner of the longest putt made on the difficult 18th hole at Golf Club of Houston. There were 92 players participating in the fundraiser event this year.

Steele will be a weekly contributor to Edmond Life and Leisure with a golf column and cover junior golf, boys and girls high school golf, men’s and women’s college golf in the area, Oklahoma amateur golf, events held at all of the golf courses in Edmond and professional golf.